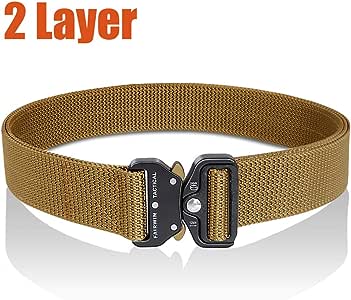 Washington State
2.0 颗星，最多 5 颗星 Below Average Build Quaity
2020年7月8日 - 已在美国亚马逊上发表
已确认购买
I ordered this belt to help carry my EDC items better. My old belt is a single ply web belt that would sometimes try and roll or sag, and it has one of those buckles shaped like a triangle with a sliding bar that you run the belt through and hope tension keeps it on, but it would always slowly loosen throughout the day. I had hoped this belt would solve both problems.

The belt is stiffer, thanks to the 2-ply construction, but not so stiff that is uncomfortable. It does not roll or sag anywhere. And carries my EDC just fine, for now. I hope break-in does not induce any problems.

I am a little dissatisfied with how the buckle sits on the male-side. When the belt is on the male side is lifted away from the body due to how the belt runs through it. There is a relief cut into the edge of the buckle that is supposed to alleviate this problem, but it is far too shallow to really be effective.

The biggest issue is the sloppy construction. The belt is a single layer of webbing doubled over itself to make a 2-ply belt. At one of the ends, the one near the male buckle. It is sloppily sewn, a bit crooked. And the way they melted the end formed a catch point that prevented the belt keeper loop from sliding toward the back of the belt. I had the same problem with 2 different 1-ply Fairwin belt, in that both had badly finished ends. So 3/3 sloppy construction.

I did eventually get the loop to slide back, but it took some doing and I'm sure the inside of the loop is probably abraded a little bit. A lot of this could be resolved if they would cut and melt the end of the belt with diagonal cuts at the corners or just a rounded tip, instead of just doing a straight slice. And double check the end for catch-points.

So, I'll tentatively recommend the belt if you are well within the middle of one of the size choices and have luck on your side. You'll need it to avoid a sloppily built example. Hoping they just make a velcro-style 2-ply belt in the future.

Also, would not mind seeing 2-ply belts come in a 2-pack to save some money. And maybe more colors.

Pro -
-Heavy double thick belt works well for my cell phone that kept popping off my leather belt
-No slipping or moving once the buckle is set
-Not a big deal to remove the buckle when I change pants
-Solid and secure buckle locking mechanism - it's never popped loose
-I wear this belt at the gym and all day long, it's holding up well except for the one "con" below

Con-
-The black color on the belt buckle us wearing off on the sides of the buckle where I grab it to interlock the buckle ends (see the attached photo).

Two months after purchase and my only knock on this belt is that the black coloring is slowly wearing off the buckle. Other than that, it's worked great. Based on this experience, I’d buy this belt with an natural, unpainted finish in the future.

JG
5.0 颗星，最多 5 颗星 Best work belt on the market
2019年10月17日 - 已在美国亚马逊上发表
已确认购买
I work in construction and have gone through more than a few belts due to heavy tools hanging on it and stretching the buckle holes. This is by far the best work belt I've ever owned. The clasp won't stretch like buckle holes and the double nylon layers disperse the weight of my tools perfectly. As an added bonus, the clasp unlocks exceedingly fast for the emergency hustle to the restroom when seconds count! Im buying several more to keep on hand for future use. I may never need another belt again.
阅读更多
加入亚马逊Prime，从此免运费
亚马逊Prime会员可享海外购美/英/日/德跨境免邮，全年无限次！更有免费无限次阅读电子书服务
> 立即加入
了解我们
合作信息
帮助中心和购物指南