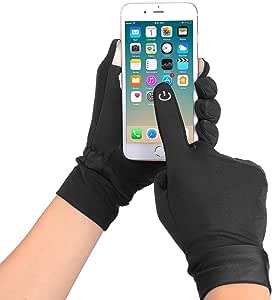 Coid
2.0 颗星，最多 5 颗星 Quickly wears through and becomes normal, only semi-effective gloves.
2018年1月12日 - 已在美国亚马逊上发表
已确认购买
The first day that I had used these it was a blast. Though they were never the warmest to begin with, they at least helped a bit against the blizzardy winds of New York and worked on my phone, albeit only at certain angles.
Immediately after trying them on the second day, however, I noticed it took a bit of pressure to start registering with my phone. I tried wiping the finger tips and initially that worked, but it got worse and worse. It's now been over a week and while the gloves are at least acceptably warming, the touch screen function almost never works, especially not in the snow, when it gets TOO cold, or if there is even the tiniest amount of dirt, grime, moisture, or anything like that. Since I bought these almost primarily for the touch-screen feature, this is a pretty big let down.

Sarge
3.0 颗星，最多 5 颗星 Not very good in keeping your hands warm
2018年1月25日 - 已在美国亚马逊上发表
已确认购买
Not very good in keeping your hands warm. I work as a delivery driver. i live in the south and at 20-30 degrees weather while using these gloves my hands are still frozen. I would not recommend these if you plan to be in the cold for extended amounts of time. Also the touch screen function isn’t very responsive either. These gloves fit well and look great but i can’t honestly recommend these if you’re looking for warmth and to actually be able to use your phone while wearing them.
阅读更多

Amazon Customer
4.0 颗星，最多 5 颗星 Keeping my hands warm so i can use my phone.
2018年3月8日 - 已在美国亚马逊上发表
已确认购买
Gloves were very comfortabe, and did not limit mobility of my fingers like thicker gloves would have. They are adequate enough for most cold weather conditions, but would not be ideal for extreme cold.

The touch pads were awesome and worked well even when i was in rainy weather and hloves had gotten a little damp. BTW, they dried out quickly too.

Sarah
4.0 颗星，最多 5 颗星 Good Unisex Gloves
2018年9月3日 - 已在美国亚马逊上发表
已确认购买
These gloves work well with my phone and are very comfortable. They could be warmer, but I don't think they're meant to be super heavy duty. They work well for commutes and short periods outside.
The problem is that I wasn't sure which size to order and whether the sizing is meant for men or women. I ended up ordering too large.

Keely Allyse
5.0 颗星，最多 5 颗星 Great gloves
2017年12月30日 - 已在美国亚马逊上发表
已确认购买
These gloves were exactly what my brother asked for for Christmas. They are thicker and much better quality than I expected them to be. The finger makes it easy to use a touch screen and they are fairly compact for storage. Overall, I would buy these again (maybe for myself!)!
阅读更多