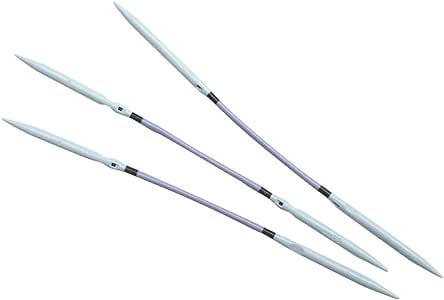 June
5.0 颗星，最多 5 颗星 Great needles!
2018年9月12日 - 已在美国亚马逊上发表
尺寸: US 8/5 mm已确认购买
I have been using these double pointed needles to make baby hats and they are much easier to handle, because of the bend, than straight double point needles. To make them even better you can use a connector from another set and make a circular needle that is just large enough for a newborn hat out of two of the wires. When you are ready to decrease for the crown, just twist them apart again and make them back into three needles to finish the hat.
阅读更多
18 个人发现此评论有用

Bucky Walsh
5.0 颗星，最多 5 颗星 The Flex Makes all the Difference
2019年8月22日 - 已在美国亚马逊上发表
尺寸: US 8/5 mm已确认购买
The flex in these needles enables a LOT of stitches to be easily held by each needle. And unlike other double-pointed knitting needles, there is little risk of stitches sliding off - it is easy to bunch the stitches around the flex when you are not working with a needle and be sure the stitches will not wander off. The short needle length is very handy for working in the increasingly tight space as you decrease.
I was pleased to find that 3 needles is comfortably enough to move onto from a 16 inch circle - indeed, at least some of the time two needles is enough as you work the stitches around.
I have noted other comments about not being flexible enough - I must disagree.
And, if you have other Denise Interchangeable needles and cords, these needles and flex sections will interchange with them. The short, sharp needles click off of the flex and onto a cord to make your 16 inch circle more like a 13 or 14 inch circle if you want to stay in the round a little while longer.
阅读更多
7 个人发现此评论有用

Amazon Customer
5.0 颗星，最多 5 颗星 Love these
2019年1月16日 - 已在美国亚马逊上发表
尺寸: US 13/9 mm已确认购买
I have had so much trouble trying to do magic loop method for knitting in the round. I always have ladders, no matter how hard I try. I bought regular dpns and also had no success. I ordered these and within 5 minutes of trying them out..success! I am so happy with these and I plan to order a set.
阅读更多
10 个人发现此评论有用

David Brown
2.0 颗星，最多 5 颗星 Just okay
2020年2月18日 - 已在美国亚马逊上发表
尺寸: US 7/4.5 mm已确认购买
I got these instead of the more expensive ones - and while they are certainly better than using double-pointed needles, I do have a few complaints. 1) the plastic needles themselves, while not impossible to knit with, aren't as smooth as metal needles, and 2) to compound the problem, they've felt it necessary to roughen them up by stamping the needle size on BOTH ends (so the yarn catches on the rough spots both coming AND going), and there's an indentation at the join (also both ends) that the yarn catches on as well. So - I feel like I'm having to force the yarn across the needles, and that's no fun. If I had it to do again, I'd spend the extra $5 and get the nicer ones.
阅读更多
3 个人发现此评论有用

Kelly's Creek
5.0 颗星，最多 5 颗星 I was curious to try this style
2018年10月28日 - 已在美国亚马逊上发表
尺寸: US 5/3.75 mm已确认购买
I am always in search of a good way to knit a small circumference. This is not that different than double points. Maybe a little less risk of having stitches slip off the non-working end of the needle. I'm not totally in love with these.
阅读更多
6 个人发现此评论有用
加入亚马逊Prime，从此免运费
亚马逊Prime会员可享海外购美/英/日/德跨境免邮，全年无限次！更有免费无限次阅读电子书服务
> 立即加入
了解我们
合作信息
帮助中心和购物指南