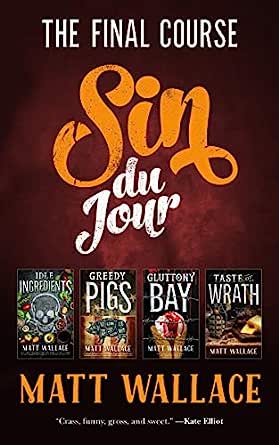 Josh Mauthe
5.0 颗星，最多 5 颗星 A (bit lengthy) review of all four books in the outstanding back half of the series
2020年5月19日 - 已在美国亚马逊上发表
已确认购买
Matt Wallace’s Idle Ingredients is the fourth entry in the Sin du Jour series, a gleefully anarchic piece of splattery horror-comedy set in a kitchen that caters to demons and other supernatural entries. It’s the halfway point in the series, which is set to go seven books (one for each deadly sin, I’d assume), and that means that Idle Ingredients finds Wallace doing a couple of things.

First, he’s taking a bit of a slower pace this time. After the first three books in the series, which form a loosely self-contained story, Idle Ingredients, at least in part, gives the characters a chance to breathe, recover from those events, and figure out how they’ve changed as a result. One character makes a break for it; others draw closer together; and most importantly, the mood in the kitchen has changed as the governmental agency supervising them tightens their grip to prevent more chaos. More on that last point in a moment; the important thing here is that Idle Ingredients isn’t quite as insane as the other books in the series so far, but that’ an intentional choice by Wallace, who instead is taking some time to build out his world, build up his characters, and remind us that these events take a toll. It’s a smart move for the series, and it’s done well; even if I missed the twisted splatter of the previous books (though there’s some fun towards the end), seeing Wallace take the time to build his characters (particularly his female characters here, who get the chance to shine) is a good investment that makes the series even stronger than it’s been.

The second thing Wallace is doing – at least, from what I can tell – is setting some markers for things to come. There’s definitely a sense of being halfway through the series to Idle Ingredients, with some long-simmering plot threads continuing to boil and a few new elements tossed into the mix, including the now expected (but always surprising!) cliffhanger ending. This part is a bit harder to gauge based solely on Idle Ingredients – are we seeing a bigger structure, or just some foreshadowing for book five? – but it’s all still interesting, and goes back to that fleshing out of the world that’s so enjoyable. Idle Ingredients may not match up to the gloriously nutty peaks of the books before it, but if you’re enjoying the series, this one will satisfy those of you wanting a bit more time with the cooks we’re only just getting to know.
-------
Greedy Pigs, the fifth entry in the series, finds Wallace in the back half of the story, and kicking things back up into high gear after the “relative” quiet of Idle Ingredients (if “quiet” is the term for supernatural elections, succubus-inspired gender wars, and more). Following the immediate aftermath of the election in Ingredients, Greedy Pigs finds the Sin du Jour crew being asked to cater the inauguration of the new President of the supernatural orders of the world (and really, most of humanity, no matter how who we think really runs things). But it doesn’t take things long to get out of hand, and before you can even start taking it all in, Wallace is giving you secret witch hideouts, Nazi war criminal pandas, demonic alien politicians, and more – and all that is background to the actual story.

Greedy Pigs is a delight – maybe the best book since the series’ initial volume, Envy of Angels, delivering a slew of wild moments that defy easy categorization, giving you a tight plot with an obvious ticking clock whose motivations are unclear, and giving you a climax that raises as many questions as it settles. It’s clear that the series is beginning to move into the endgame, with Wallace creating a big bad in the form of the government agency that supervises the kitchen, but the exact form and nature of that finale is yet to be determined.

But honestly, part of what I love about this series is how unpredictable it is. Wallace may be writing only novellas, but there are whole fantasy series that don’t have a tenth of the imagination, style, and fun that Wallace packs into less than 200 pages. These books are gross, gruesome, twisted, funny, absurd, satirical, and just plain fun – a perfect mixture of ingredients that has me eager to move on to the next book in the set.
-------
As I headed into Gluttony Bay, the penultimate entry in the series, I was starting to wonder exactly why the series had to end. Yes, there were bits of arcs here and there, but each novel tended to be its own self-contained piece, and I couldn’t see what was happening in the larger saga that necessitated an ending.

Then came Gluttony Bay, and it all made a lot more sense, as Wallace whips the rug out from under us and makes us see the connective tissue between all five of the previous entries – and throws our heroes into an absolute nightmare, as they find themselves at the titular Gluttony Bay – a kitchen operating out of Guantanamo Bay and serving as an unofficial arm of that facility’s prisoner handling.

Wallace has always brought in social commentary and satirical elements into the books, but rarely has the series been as angry – and as out-and-out horrifying – as it is in Gluttony Bay, which eschews the series’ normally splattery tone in lieu of disturbing, visceral, intense horror, all while drawing a clear line between the politics of the camp and their actions (to say nothing of the branches of the government using it for their own end). If Greedy Pigs satirized the vacuity of most politicians, Gluttony Bay comes out angry and swinging, giving us a story of a series of chefs who find their talents abused and manipulated by the government they thought was protecting them – and the satirical bent there is hard to ignore, giving the horror on display even more of a bite. It’s a poison pill of a novel, and while it’s satisfying in the way it develops the story in big ways, pulls the series together unexpectedly, and kicks off the endgame, don’t be surprised when you realize that the black comedy of the earlier novels has given way to something truly disturbing.
-------
In Taste of Wrath, the finale of the series, the crew fights back, as Wallace brings all of his characters – and many of the creatures we’ve seen throughout the novellas – together for one massive showdown, providing closure to the main story arc, making us realize the coming-of-age story (sort of) underneath the main text, and bringing together a whole lot of fireworks in the form of a full-scale urban war at the Sin du Jour headquarters.

In some ways, Taste of Wrath is a little bit of a letdown; it’s a big action sequence of a novel, throwing together all of the series’ disparate pieces into one giant mix, and using combat to bring a lot of arcs to an end with heroic stands, acts of sacrifice, and so forth. (The body count of named characters here is admittedly pretty impressive.) So, on one hand, it feels like a less interesting book than its predecessors, trading in a boundless imagination and a gleefully splattery sensibility for a big blow-em-up ending. Nevertheless, it’s a good ending to the series, and what Wallace loses in weirdness, he makes up for by sticking true to his characters and letting their arcs often find logical conclusions, be they redemptive moments or brutal deaths. It’s not as original as the wonderful series before it, but it’s a satisfying ending that gives us closure on the stories, packs in some unexpected surprises, and helps us see just how structured these seemingly disparate tales have been all along.

Matthew X. Gomez
5.0 颗星，最多 5 颗星 Great conclusion to the series
2018年11月1日 - 已在美国亚马逊上发表
已确认购买
What happens when a bunch of NY chefs have to cater for the supernatural? That's the central premise of Matt Wallace's Sin Du Jour series, a fantastic serial that manages the delicate balancing act of having both heart and humor. Some of it is going to seem ridiculously outdated in a few years (for instance, there is a "Growing Up Gotti" reference), but the core of the story- what it means to form a family even if you aren't born into, what it means to take a stand on principles despite an easy way being presented, and even what it means to make mistakes and have to find redemption, all of that is wrapped up in this last part.

Just, don't read it if you are hungry, all right? Wallace nails the food descriptions, and while there isn't a blow-by-blow breakdown of each dish it's almost a shame there isn't a cookbook to go with it.
阅读更多

Ari J Joki
4.0 颗星，最多 5 颗星 Mêlée of emotions, words, flavours, in overwhelming and exquisite choreography
2019年6月13日 - 已在美国亚马逊上发表
已确认购买
Wallace handles a number of viewpoints deftly switching between the brutal, the sublime, and the banal, resulting in a stunning warfighting adventure against a backdrop that hopefully will be soon seen as a temporary aberration. The use of the present tense is not my favourite mode of writing, but it did not stop me from relishing the buffet.
阅读更多

Azhar
5.0 颗星，最多 5 颗星 Incredible
2019年4月14日 - 已在美国亚马逊上发表
已确认购买
It was a fine ending to a story that knew its length and its time had come to an end. I recommend read it. It was well worth the price.
阅读更多

Betty Widerski
5.0 颗星，最多 5 颗星 Quirky and quick moving
2018年12月29日 - 已在美国亚马逊上发表
已确认购买
I had read the first 3 in this series so was happy to get the rest in this set. I love how by twisting the circumstances of being a caterer the author has turned a mundane job into wild adventures.
阅读更多
加入亚马逊Prime，从此免运费
亚马逊Prime会员可享海外购美/英/日/德跨境免邮，全年无限次！更有免费无限次阅读电子书服务
> 立即加入
了解我们
合作信息
帮助中心和购物指南