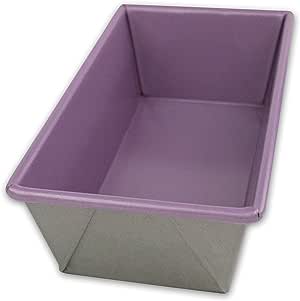 Edward M Ricks
3.0 颗星，最多 5 颗星 Good bread pan but......
2019年9月11日 - 已在美国亚马逊上发表
尺寸: 1 Pound Loaf Pan已确认购买
I bought this bread pan on a whim, also because we needed a second. Functionally, this bread pan works. You put dough in, bake it, you get bread out.

I've used this twice within the past week. First time, I made some banana bread. I made sure to butter up the sides so it can slide out easily. Well, it seemed there was quite a bit of moisture trapped between the sides and on the bottom. There was a small film of the banana bread left on the pan, even after a copious greasing. I thought, "Hey, banana bread can get pretty moist, maybe it was just the recipe I used."

Today, I took another loaf out of this same bread pan. I have used this recipe many times. The loaves never stick, especially after a greasing. Greasing the pan again, baking the dough, letting it cool in the pan a little bit. There was quite a bit stuck on. It seems that the moisture gets pulled to the side and causes the bread to stick.

Maybe the manufacturer's have some special trick that a plebeian fool like myself doesn't know, but in my experience with my bread recipe, the only new factor was this pan.

The pro of this, this pan is REALLY easy to clean. But I'd take a proper nonstick, with less moisture stuck after a bake.

The short version, in the few times I have used this pan, I have had some bread residue left on the sides. It is also a bit difficult to get out because of this. But because of this, the pan is easy to clean.

Badass chick
2.0 颗星，最多 5 颗星 It’s okay for a few uses
2019年6月5日 - 已在美国亚马逊上发表
尺寸: 8-Inch Square Pan已确认购买
It’s a decent cheap non stick
Rusted in corners immediately after first use
Has some weird seam too between non stick overlay that will rust and could get good stuck in it
阅读更多
6 个人发现此评论有用

The color coating on this pan is vibrant for allergy food service or families.
阅读更多
2 个人发现此评论有用