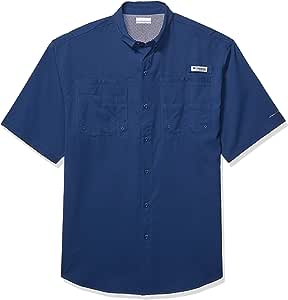 Gravity's Gone
5.0 颗星，最多 5 颗星 Comparison of Columbia PFG Styles (Tamiami II, Bahama II, Bonehead, and Blood & Guts III)
2015年9月25日 - 已在美国亚马逊上发表
已确认购买
Columbia makes some fantastic shirts, but make sure to order the appropriate size. I am 5’10”, 195 lbs, and would typically wear a Large in most similar styled (button-up) shirts, but I have to get a Medium in Columbia PFG shirts. (The Medium is still a moderately loose fit, as the Large is like a tent on me). Tip number two is that because these shirts are on different sizing scale, many get returned to the Amazon Warehouse, so keep an eye for Amazon Warehouse deals on these shirts (see tips to finds the easiest way to compare prices across sizes and colors at the conclusion of this review). I have tried the Tamiami II, Bahama II, and Bonehead (AND new Blood & Guts III – see below for updated comparison including the BG3 series) versions of the Columbia PFG shirts, and have been mostly pleased with all of them. The Tamiami II was my favorite due to the cooling effect of the weave, but the similar Blood & Guts III is now right there with it. Below I have noted the differences in these styles, for those trying to decide which shirt they may prefer.

TAMIAMI II STYLE (POLY) - SUMMERTIME CASUAL FAVORITE
The Tamiami II (T2) and the Blood & Guts III (BG3) are my favorite of the aforementioned PFG styles. The main difference between EACH OF these styles is material. The T2 & BG3 are 100% polyester (liner and exterior), the Bahama II (Ba2) is nylon, and the Bonehead (BH) is poplin cotton. The T2 is the thinnest/lightest (most breathable) material of the three styles, also has a slightly shinier appearance, and is probably the most wrinkle resistant of the three (as the fabric is less rigid that the nylon Bahama II or cotton Bonehead). (Update 7/11/16 – The Blood & Guts series is also breathable polyester similar to the Tamiami with a slightly different styling, and stain resistant fabric. See update at end of review for full comparison.) The T2 has a snap button pocket on top with Velcro pockets underneath on both sides, which I also prefer over the pocket style on the other two (Ba2 & BH have identical pocket styles). The synthetic T2 and Ba2 both wick moisture and create a cooling effect better than the cotton BH, but the lightness and weave of the T2 makes it by far the coolest wearing of the three. For outdoor activity in the heat and humidity of summer, it would definitely be my preferred choice. The long-sleeve version is fantastic for offshore fishing when lightweight sun protection is essential. The Ta series also does not wrinkle as badly as the Ba and BH series shirts do. (The PFG apparel which has an SPF rating, such as the Tamiami & Blood/Guts series, has an open fabric weave which is “lose” enough to allow some penetration of UV through the material itself; which means the material is much more breathable ergo cool feeling, although technically you could get some UV exposure through the shirt.)

BAHAMA II STYLE (NYLON) - WORK WEAR IN MILD WEATHER
The Bahama II is the middle ground between the T2 and the BH. It is synthetic - similar to the T2, but is a nylon exterior shell with a polyester liner (whereas T2 is poly liner and shell). The pockets on the Ba are the same traditional Columbia PFG look as the pockets on the Bonehead. The slightly more rigid feel of the nylon, also gives the Bahama a more traditional (cotton-look) appearance than the T2. In a certain respect, the Ba nylon manages moisture better than the BH cotton version – i.e. it evaporates sweat more quickly. On the other hand, the nylon does not absorb moisture, so in extreme heat with heavy perspiration, it gives the material a slimy feel that I do not enjoy. The Bahama also wrinkles worse than any of the other PFG series shirts, so it is my least favorite series.

BONEHEAD STYLE (COTTON) - COOL WEATHER FAVORITE
Most everything has already been covered. The BH and the aforementioned Ba styles look virtually identical. Essentially, I like the Bonehead over the Bahama because it does not get that slimy feeling when you sweat, and it is slightly better from a wrinkle perspective. The Bonehead is probably my favorite series when moisture management and cooling effect are not important, so I like these in long sleeve for fall and winter wear. I also like the traditional appearance of the Ba and the BH for work wear, but the T2 look I like better for casual. (The newer Blood & Guts series has the comfort of the Tamiami series, but has a look similar to the Bonehead, so it is my new favorite summertime work shirt.) The Bonehead long sleeve also makes a great layering option for hunting season, and Sage is a great natural neutral (earth tone) color for this purpose.

UPDATE 7/11/16 – BLOOD & GUTS III (POLY) - HOT WEATHER FISHING FAVORITE
When this review was originally posted, I only contrasted the Bahama, Tamiami, and Bonehead series shirts, but recently I have found a new favorite – the Blood & Guts III (BG3). While the name may not be all that appealing, these are really great shirts. They have an SPF rating, therefore breathable/open weave, similar to the Tamiami, with a styling that more closely resembles the Bahama & Bonehead series. The BG3 is also treated for stain resistance, making it a great shirt for fishing, work, and outdoor activities. Finally, the BG3 does not wrinkle nearly as severely as the Bahama nylon or Bonehead cotton shirts do. Out of the four PFG series shirts discussed, the BG3 series probably have the tightest fit. I still wear a medium in the BG3, but the series has a slimmer type cut than the previous versions discussed.

AMAZON PRICE COMPARISON & WAREHOUSE DEALS
I used to always get aggravated at the way Amazon list apparel items with multiple colors, as it can take forever to search through multiple color (and size) options to see the cheapest offerings. On my iPad version the color prices are displayed in a list style automatically, but on my PC desktop I would have to select each color/size to see the price options. I did not realize there is a much simpler way. Select the “new and used from” (or “new” if no used offerings available) icon, which will take you to a list view. There must be multiple offerings for the exact size and color selected for this option to appear, so if you do not see the “new and used from” hyper-link, then select another size/color combination till the link appears.) In the list view screen, select your size and click the “lowest offer for each” icon beside the color selector. It will display the cheapest offering for each color shirt in that size, so you can quickly see which colors are the cheapest. Also, this view will show any Amazon Warehouse Deals available. As mentioned in the first paragraph, these shirts get returned often due to sizing issues, so many times the Warehouse deals are shirts that were tried on and immediately returned for a smaller size.

Matt
5.0 颗星，最多 5 颗星 Love these shirts: Overview of the Bonehead, Baitcaster, Bahama, Low-Drag and Tamiami
2015年10月1日 - 已在美国亚马逊上发表
已确认购买
I'm a big fan of Columbia "breather-back" shirts. In the hot Texas summers these things are no joke- they really do keep you cool. For no good reason, I only had one of these for many years and I only used it for fishing. This past summer I snapped out of that nonsense and started buying more and wearing them all over. Here's my take on the different shirts, hope this helps you. (for reference I am 5'8", 175#, 32" waist and usually wear either an athletic-cut large shirt or a medium if it's cut normally...yes, I live in size hell)

Bonehead: This shirt is 100% cotton and is very tough. Makes a great work shirt. It wrinkles easily and has the traditional PFG assortment of pockets on the front. It does not fly under the radar but it looks fine for what it is. I have several of these and if you can get them less than $15 that's a great deal. Given the pros of the other shirts, however, I must say this style is my least favorite (but still a great shirt, and my go-to work shirt). I always get a small in this style and it's still roomy at that. It's cut VERY large.

Bahama II: Much like the Bonehead in terms of pockets, but it's made of nylon fabric. Breathes better and wrinkles less but can still wrinkle. The "Super Bahama" version has a print rather than solid colors. Heavier material than the Tamiami. I wear a small in this shirt as well. Not super lightweight but tougher and can be used as a work shirt. If you are in a low-humidity environment this shirt works well. For extremely high-humidity and/or very sweaty activities I find this shirt clings to me and is not as comfortable as the Tamiami.

Tamiami II: Very light cloth, kind of parachute-like. 100% polyester. Different pockets. This, to me, is the coolest (temperature-wise) shirt of the bunch. The "Super Tamiami" is the printed version. I wear a small in this one as well and it's my favorite for very hot weather but I would be very hesitant to wear it for work applications. Not as tough as the Bonehead or Bahama. Pretty much wrinkle-free.

Baitcaster: Lightweight like the Tamiami but different cut and different pockets. It's kind of a cleaner version of the Tamiami, however, because of the cut I wear a medium in this rather than the small in most of the others. I tried a small and it would button but was tight in the shoulders.

Low-Drag Offshore: Another lightweight version with far more conventional pockets and a very clean look. Some colors have contrasting stitching which, in my opinion, looks sharp. The sizing on this is smaller than the Bonehead/Bahama/Tamiami but slightly larger than the

Baitcaster. I ordered a small and it fits, barely. By far my favorite design. When I order another I may or may not order up a size to a medium.

So there you go. If I seem addicted to these shirts it's because I am. In a hot climate you may be able to find a cooler shirt but if one exists I don't know about it. Retail you can expect to pay anywhere from $30-$60 for these but if you keep an eye out on Amazon getting them as cheap as $11 isn't unheard of. Money well-spent if you spend a lot of time outside.
阅读更多
111 个人发现此评论有用
加入亚马逊Prime，从此免运费
亚马逊Prime会员可享海外购美/英/日/德跨境免邮，全年无限次！更有免费无限次阅读电子书服务
> 立即加入
了解我们
合作信息
帮助中心和购物指南