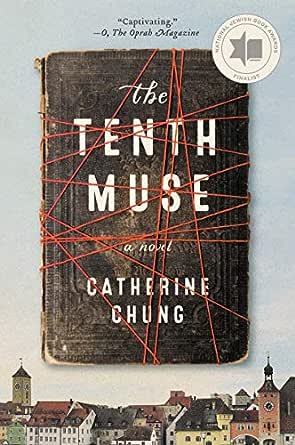 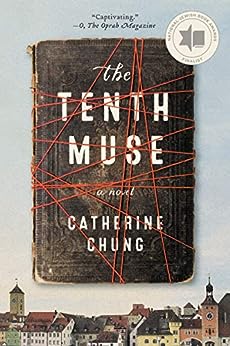 The cliché that boys are better at math collapses before the diamond-hard mind of a grad student whose relentless attempt to prove a legendary hypothesis exposes a deeper algorithm about herself....Chung spins her captivating novel from stories of actual women who, in her words, "posed as schoolboys, married tutors, and moved across continents, all to study and excel at mathematics (O, the Oprah Magazine)

A page-turning intellectual thriller, a family romance, an alternative history of twentieth-century math - I couldn't put it down (Elif Batuman)

The Tenth Muse is as ambitious and intriguing as the complex math problems Katherine, the protagonist of this remarkable novel, aims to solve. In this novel -the scope of which is staggering - Chung has crafted a story that is moving, elegant and richly written. Her prose, as it unfolds, becomes an elusive equation readers will yearn to solve (Roxane Gay)

Ambitious, mesmerizing, and immersive, The Tenth Muse gives us a character we'd follow anywhere, and journeys well worth following her on. This novel dazzles (Rebecca Makkai, author of The Great Believers)

Catherine Chung has written a deft, spellbinding emotional puzzle-box of a book, rich and intricately layered. The Tenth Muse slowly, carefully builds to turn your every expectation on its head, and reading it feels like a glimpse of what mathematics might be in the eyes of its ablest practitioners--both secret and sublime (Téa Obreht)

The Tenth Muse is a must-read. This beautiful, captivating novel has it all: A riveting family secret; a heroine ahead of her time; and a brilliant historical narrative that sheds light on the way we live now (J. Courtney Sullivan, author of Saints for All Occasions)

Two great enigmas form the center of this elegant novel, in which a brilliant mathematician attempts to solve the impenetrable Riemann hypothesis and learn the truth of her family history. Katherine is the daughter of an American G.I. and a Chinese immigrant who disappears when Katherine is a girl. During her childhood, in the nineteen-fifties, in Michigan, her intelligence and mixed heritage alienate many people, and lead her to wonder 'in each situation whether this time it was my femaleness or my Asianness or the combination of both that branded me different'...In the novel's portrait of her perseverance, it pays moving homage to all the 'unhailed, unnamed' women in history whose talents were dismissed (New Yorker)

The Tenth Muse centers on Katherine, an aspiring mathematician whose studies take her deep into her family history, and a legacy of genius and empowerment which probes compelling questions about her identity (Entertainment Weekly) --此文字指其他 kindle_edition 版本。

Catherine Chung is the author of The Tenth Muse and Forgotten Country, for which she won an Honorable Mention for the PEN/Hemingway Award. She has been a National Endowment for the Arts Fellow, a Granta New Voice and a Director's Visitor at the Institute for Advanced Study in Princeton, and was the recipient of a Dorthy Sargent Rosenberg Prize in poetry. She has a degree in mathematics from the University of Chicago, and worked at a think tank in Santa Monica before receiving her MFA from Cornell University. She has published work in the New York Times and Granta, and is a fiction editor at Guernica Magazine. She lives in New York City. --此文字指其他 kindle_edition 版本。

kerryanndunn
5.0 颗星，最多 5 颗星 I hate math but I loved this book.
2019年7月20日 - 已在美国亚马逊上发表
已确认购买
Ugh. I loved this book. And I hate math. It was the bane of my education. It was the only subject I got a D in in high school. But this is a beautiful story of a mathematician trying to make her way through an academic world dominated by men and despite my hatred of math, I was fascinated. I was captivated by Katherine. She was strong but flawed. Sometimes too stubborn for her own good. I just wanted her to be happy. When this story turned into a mystery about her family history, I became even more enthralled. This book was a delight to read from start to finish. Twisty and turny with gorgeous prose and sparkling characters. Read it.
阅读更多
35 个人发现此评论有用

a "harty" reader
5.0 颗星，最多 5 颗星 You will thank yourself for reading this
2019年7月12日 - 已在美国亚马逊上发表
已确认购买
This is a powerful, beautiful story and not to be missed. It is not at all necessary to understand higher math to appreciate everything there is to experience in this novel. Best book I've read this year and that says a lot, as reading sustains me the way breath sustains me....
阅读更多
15 个人发现此评论有用

Thomas
5.0 颗星，最多 5 颗星 Absolutely stunning!
2020年2月2日 - 已在美国亚马逊上发表
已确认购买
Of course I was drawn to the book because of the math (I am a math teacher), but this book is so much more. Just when one is about to settle down with the story it twists and turns and pulls one in deeper. It was such a pleasure to see the author address so many real issues that we still face today. The many aspects of women in mathematics are highlighted throughout the book and it is hoped that the reader will come away with an education. I finished the book very quickly, but I will be thinking about the questions raised for a long time to come.
阅读更多
6 个人发现此评论有用

Ann B. Williams
3.0 颗星，最多 5 颗星 Interesting
2019年6月23日 - 已在美国亚马逊上发表
This story had a lot going for it. I really enjoyed reading the history of the development of higher math. Less to my liking were the ins and outs of academia, but I could certainly understand some of the prejudice there. Chung definitely exhibited a chip on her own shoulder and couldn’t see to free herself from her own imprisonment of victimhood.

Just an aside … as a woman I’ve never “felt” victimized nor have I let myself feel prejudiced against. When I was in an MBA program (in 1964) which had internships in NYC with the Big 8 accounting firms, a representative from each came to the school to make a presentation to our class and to interview students. I was one of two women students in the class. One interviewer clearly stated, “We don’t hire girls.”

I neither felt victimized nor prejudiced against. I simply knew that was somewhere I didn’t want to work! And I moved on.

Chung couldn’t seem to let her protagonist move on.

It was a beautifully written book and was very interesting, but I had a hard time reconciling her worth with the problems Katherine forced on herself because of her feelings of being victimized. This certainly echoes what one hears from modern malcontents. So maybe Chung was writing for them.

The family saga was quite convoluted – unnecessarily so, in my opinion. Lies and secrets were rife in this area of the book.

This was a very complex book and I found it difficult to review. However, I enjoyed it and I will try another by Ms. Chung.

I received an ARC of this from NetGalley and the publisher, HarperCollins, in exchange for an honest review.
阅读更多
34 个人发现此评论有用

Helen W.
3.0 颗星，最多 5 颗星 Forgettable
2020年2月25日 - 已在美国亚马逊上发表
已确认购买
The author has a decent vocabulary and doesn't resort to profanity instead of dialog. She can form actual sentences. That is a plus. It is early in her writing career, hopefully she will improve. Is this intended for adult readers? She should write about things she knows, not just throw in all of history from WWII onwards. The story itself is improbable heading toward impossible. Not believable at all. The characters are either venal or cardboard. This is an overall forgettable book. Fortunately, I got the Kindle edition at a low price.
阅读更多
3 个人发现此评论有用
加入亚马逊Prime，从此免运费
亚马逊Prime会员可享海外购美/英/日/德跨境免邮，全年无限次！更有免费无限次阅读电子书服务
> 立即加入
了解我们
合作信息
帮助中心和购物指南