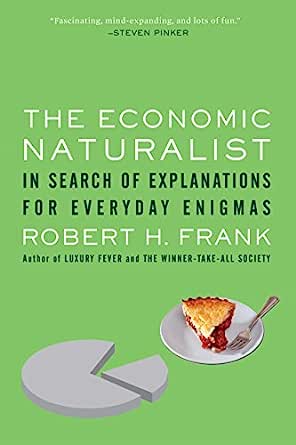 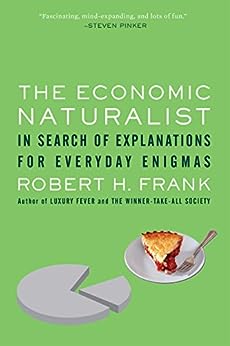 THE ECONOMIC NATURALIST: In Search of Explanations for Everyday Enigmas (English Edition) Kindle电子书

Long before there was Malcolm Gladwell (The Tipping Point), Steve Levitt (Freakonomics) and Tim Harford (Undercover Economist), Robert Frank had begun to critique the way his fellow economists thought about and taught "the dismal science."

In his wonderfully succinct and down-to-earth books, Frank explored the difference between absolute and relative goods, and how confusing the two got people into senseless economic "arms races." He wondered why consumers let their emotions get the better of their economic self-interest. And long before it was accepted wisdom, he explained rising income inequality in terms of the "superstars" that have begun to dominate any number of labor markets outside of sports and entertainment.

Frank, a longtime professor at Cornell University and its business school, is no slouch as an academic economist. His co-author in a widely used college textbook on microeconomics was none other than Princeton's Ben Bernanke, now chairman of the Federal Reserve Board. But at the same time, Frank has been complaining publicly for years that his profession was being hijacked by mathematical formalism that seemed determined to turn what had always been a social science, rooted in observation and experience, into a branch of the hard sciences. And there was no better proof of that, he wrote on more than a few occasions, than the dry and pre-professional way in which economics was taught to undergraduates.

In the end, however, it was not Frank but Gladwell, Levitt and Harford who finally earned fame and fortune by demonstrating how big was the appetite for an understanding of why things economic work the way they do. Perhaps hoping to ride the same wave, Frank has now written The Economic Naturalist, in which he offers answers to enigmas collected over the years by his Cornell students.

Many of the questions are quite clever. Why do drive-up ATM machines have Braille dots on the keypads? Why does it cost more to fly round-trip from Kansas City to Orlando than from Orlando to Kansas City? Why are people more likely to return cash to a store when given too much change than to return merchandise for which they were not charged? Why do fast food chains promise a free meal if the cashier doesn't offer a receipt, even though most customers don't want one?

You can imagine how such common-sense questions could form the starting points for just the kind of writing about business and economics that curious readers now crave. And sometimes, Frank's one- or two-page answers deliver on that promise.

One reason people are marrying later, for example, is that they are more mobile and more urban; consequently they don't face the problem of small-town teenagers who figure they'd better grab the best mates before they are all taken. And some waiters earn more than assistant chefs not because they contribute more value to the restaurant enterprise, but because the cooking job can be a stepping stone to more money and prestige while waiting tables leads nowhere.

I was particularly intrigued by Frank's explanation of why company managers, over time, lean toward giving more criticism than praise. According to Frank, managers who are highly critical of employees during their inevitable "slumps" kid themselves into believing that when employees' performances rise toward the average, as they usually do, it's all because of the tough love they received. On the other hand, they observe that the high-performing employees on whom they lavish so much praise inevitably wind up disappointing them as their performance reverts toward the mean.

Unfortunately, clever "enigmas" and short answers create a cumbersome and artificial organizing structure for dealing with fascinating issues such as the logic of price discrimination, the failure of collective action, and the relevance of markets to mating. The result is often repetitious and too often simplistic and unsatisfying.

We are told, for example, that sometimes goods are priced on the basis of what it costs to produce them (brown eggs) and sometimes on the basis of what people are willing to pay (sleeker, black colored Apple computers), but nowhere does Frank help us resolve this tension between demand and supply-side determination. Nor does he explain with any satisfaction why Broadway theaters have figured out how to sell last-minute tickets undercutting the prices they charge rich patrons, but airlines can't figure out a similar strategy for filling their empty seats.

Readers may question some of Frank's unsourced assertions, such as the old saw that retailers make 65 percent of their profit during the Christmas season. Washingtonians will also wince at his explanation for why it's illegal in many states to talk on a cell phone while driving but not to eat a Big Mac and fries. His (or his students') flaky hypothesis: It's all about the power of the fast-food lobby.

For all its faults, The Economic Naturalist will add momentum to the overdue campaign to take economics back from the mathematicians and root it in the everyday lives of consumers, workers, investors and entrepreneurs. It is pleasant enough to read, but it breaks little new ground and winds up being more clever at asking questions than at answering them.

Acknowledgments
Introduction
1 Rectangular Milk Cartons and Cylindrical Soda Cans: The Economics of Product Design
2 Free Peanuts and Expensive Batteries: Supply and Demand in Action
3 Why Equally Talented Workers Often Earn Different Salaries and Other Mysteries of the World of Work
4 Why Some Buyers Pay More Than Others: The Economics of Discount Pricing
5 Arms Races and the Tragedy of the Commons
6 The Myth of Ownership
7 Decoding Marketplace Signals
8 The Economic Naturalist Hits the Road
9 Psychology Meets Economics
10 The Informal Market for Personal Relationships
11 Two Originals
Parting Thoughts
Notes --此文字指其他 kindle_edition 版本。

Robert H. Frank is the Henrietta Johnson Louis Professor of Management and Professor of Economics at Cornell University's Johnson Graduate School of Management. His “Economic Scene” column appears monthly in the New York Times. His previous books include The Winner-Take-All Society (with Philip Cook), Luxury Fever, and Principles of Economics (with Ben Bernanke). Frank's many awards include the Apple Distinguished Teaching Award and the Leontief Prize for Advancing the Frontiers of Economic Thought. He lives in Ithaca, New York.
--此文字指其他 kindle_edition 版本。
阅读更多

Stephen
5.0 颗星，最多 5 颗星 A gem for economics teachers
2016年2月27日 - 已在美国亚马逊上发表
已确认购买
This book is a gem for economics teachers. Though I like Freakanomics, I recommend The Economic Naturalist to the teachers I work with. Each page has bite-size little mysteries that show the power of economic thought for understanding the world around you, so it's great for helping students learn economic concepts, and for helping them see how econ is relevant to daily life. It's also great for teaching students to have curious minds--it trains you to think about all the little phenomena you see around you each day, and to apply some systematic thought to them.

By contrast, Freakanomics does not help the reader internalize and use economics concepts quite as well. (That is, except for the first two chapters on Sumo wrestlers, teachers, and real estate agents. Those are the chapters I like best in Freakanomics, and they're most like the approach of Econ Naturalist.) Freakanomics shows a few ways that the author (Levitt) solved some neat mysteries, but it doesn't do as good a job giving you the mental tools you need in order to do the same thing.

The Economic Naturalist, on the other hand, invites you to use your Econ 101 concepts to interpret the world around you. I find it more accessible. The sheer number of mysteries gives the reader a broad set of applications for using economics. This is truly a book by a teacher, for teachers.

David M. Chess
3.0 颗星，最多 5 颗星 Fun speculation, but no more than that
2008年1月21日 - 已在美国亚马逊上发表
已确认购买
I'd hoped this book would be a collection of enlightening economic explanations of puzzling phenomena. That is in fact what it purports to be, and while reading it it sometimes feels like that, but mostly it's too shallow to be really satisfying.

The book is organized as a bunch of questions about Stuff in the Marketplace (Why does X cost more here than there? Why do Zs come in round containers while Ws come in hexagonal ones?), each with clever economically-based answers.

The problem is that the answers, while clever and facile, are pretty much entirely speculative, just-so stories without any real evaluation of whether or not they're the right explanation. "It might be because C!" Well, okay, but is it?

While it's fun to see smart people make up plausible economic explanations for puzzling things, I find it ultimately unsatisfying that the book stops there. It would of course take more work to try to verify the armchair guesses, but without that verification the whole thing ends up feeling sort of pointless. I'd much rather read about clever economic explanations that turned out to be *correct* than ones that are merely cute and/or plausible.

MurftheSurf
2.0 颗星，最多 5 颗星 Economics-NOT
2012年3月1日 - 已在美国亚马逊上发表
已确认购买
It lacks cohesion - I was hoping a for more systematic approach with interesting vignettes, but while some of the 'stories' or 'problems' are interesting they just
don't provide much help in understanding economics.

I have bought the same content book but with different book name.

Kirk Rivkin
4.0 颗星，最多 5 颗星 Very decent.
2009年1月22日 - 已在美国亚马逊上发表
已确认购买
An interesting read that should make one more aware of the micro-economics at play just going about a typical day, written in a very easy-to-follow style. My gripe is that the style is too easy, and several times the author uses it to gloss over some of the tougher-to-answer questions in the book answering nothing at all, or with what really seems like a half..baked guess, or just plain incorrectly. However, those are the exceptions, not the rule, and overall still worth the time.
阅读更多
1 个人发现此评论有用
加入亚马逊Prime，从此免运费
亚马逊Prime会员可享海外购美/英/日/德跨境免邮，全年无限次！更有免费无限次阅读电子书服务
> 立即加入
了解我们
合作信息
帮助中心和购物指南