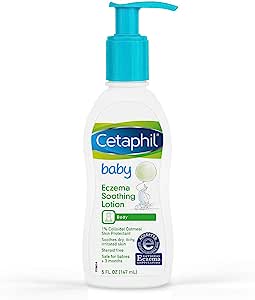 As your baby’s skin is adjusting to a whole new world, the health of his skin is so important. Which is why dermatologists and parents trust the hypoallergenic formulas to gently cleanse, nourish or moisturize even the most delicate skin. From morning hugs to nighttime cuddles, Cetaphil Baby is there to help give your little one the healthy start their skin deserves. Prepare your little one’s skin for a lifetime of loving touches with Cetaphil Baby.

Is itchiness leaving your little one feeling icky? Calm his skin with Cetaphil Baby Eczema Soothing Lotion. It’s formulated with Fillagrin technology to help your little one’s skin retain moisture, and contains a ceramide complex to give their skin a boost of much needed hydration. Cetaphil Baby Eczema Soothing Lotion received a seal of acceptance from the National Eczema Association and is dermatologist-tested! It’s clinically proven to hydrate skin and provide lasting relief for a happy baby!

Kimberly Sue
5.0 颗星，最多 5 颗星 Worked wonders on my toddler eczema. Highly recommended!
2017年4月16日 - 已在美国亚马逊上发表
已确认购买
My 3, almost 4, year old son has had eczema since he was around 8 months old, and at times it can get really bad. I have a ointment that I use on the bad spots, but I don't like to use it all over his body. I did a lot of research trying to find a lotion that I felt would work best on his sensitive skin. I knew that cetaphil was a great brand for sensitive skin, so I was already partial to it, and I decided to stick with what I know. Within one day of using the lotion on him, his skin was looking better. The issue I always had with the ointment was that it was so sticky, and that his skin never felt smooth and soft, like a toddlers skin is supposed to feel like. However, after using this lotion regularly, his skin has quickly begun to feel soft and smooth. His back no longer feels rough and dry, and he doesn't have the big patch of red, scabby skin behind his knee that drove him crazy no matter how much ointment I put on it. I don't know why doctor's never told me to get lotion like this for him? They did suggest Aquaphor initially, but it did not work, and it was really sticky. This lotion soaks into his skin and makes it soft. He was so excited to be able to put lotion on like his brother (he's an identical twin). I never let he use the same lotion as his brother, but now he has his own "special" lotion, and he loves it and reminds me to put it on all the time! I definitely recommend it for mother's who have younger children with eczema. It says 'baby' on the bottle, but it works great for my toddler!
阅读更多
32 个人发现此评论有用

Meg
1.0 颗星，最多 5 颗星 Makes my baby scream
2017年12月1日 - 已在美国亚马逊上发表
已确认购买
Tried this because the Averno Baby Eczema Therapy seemed to be just barely managing my 6 month old's mild-ish eczema, and I wanted better than just barely. Upon this lotion touching her skin, my daughter screamed, writhed, and cried in pain. It was heartbreaking, and we will not be using this again.
阅读更多
15 个人发现此评论有用

A. Wasser
5.0 颗星，最多 5 颗星 Definitely worth a try
2017年7月3日 - 已在美国亚马逊上发表
已确认购买
Our infant has gone back-and-forth with eczema-like dry skin patches. I've tried lotions and washes by Aveeno Baby and Babyganics, but I never saw a difference. I've been using the Cetaphil Baby wash with calendula on my toddler and had great results with keeping him moisturized after a bath, so decided to try this Cetaphil eczema line. It has actually worked with our infant! There is not much of a scent in either the lotion or the wash, but I love that the lotion does not leave any greasy/tacky/sticky feeling after it's been rubbed in. It seems to absorb quickly and leave her skin moisturized. The dry skin patches have slowly gone away, to the point that I forget they were even there. I'd recommend at least trying this line if your baby has dry skin patches/eczema. We're very pleasantly surprised!
阅读更多
10 个人发现此评论有用

SS
5.0 颗星，最多 5 颗星 Helpful for dry baby skin
2017年4月15日 - 已在美国亚马逊上发表
已确认购买
I bought this eczema lotion for my 2 month old baby.He has very dry,itchy,rough skin and white patches is there.i applied this lotion after he took bath,immediately the white patches vanished and skin became very soft and shiny.The most impressive thing about this lotion i,it works good for 24 hours.This lotion consistency is mid of thick to running and it spreads well on skin and quickly absorbed.Not much oily
Totally very good lotion for dry baby skin