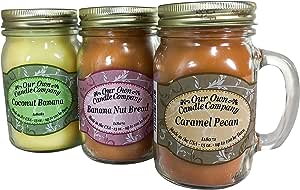 Gwen Doty
1.0 颗星，最多 5 颗星 NO SCENT!!
2018年12月19日 - 已在美国亚马逊上发表
已确认购买
Be warned: if you're looking for a scented candle- DO NOT PURCHASE THESE!!! Other than what you sniff when you first open the jar, there is absolutely NO SCENT to these candles. I have burned many brands of candles over the past 25 years, including Salt City, WoodWick, Ashland, Yankee, and even Walmart. Smell My Nuts pale in comparison. These are very poor quality candles. Not worth your money. It makes me mad to think I wasted money on 2 triple-packs for gift giving. The recipients will be as disappointed as I am! BUMMER.
阅读更多
11 个人发现此评论有用

D.B. Droppinshitz
5.0 颗星，最多 5 颗星 Great Candles Overall - Be prepared for the scents of Jolly Ranchers, Red Hots, and Circus Peanuts.
2019年2月22日 - 已在美国亚马逊上发表
已确认购买
I've been burning about one of these Our Own Candle Company mason jar candles per week for the last few months and haven't gotten any scent more than once (I think). That's not a statement on the candles themselves, just that I like variety and I've tried a variety of these scents. Following is a review about the candles in general and some notes about these scents in particular.

Pros: The handle makes it easy to move still-burning candles without handling the hot jar. They burn cleanly, leaving little wax at the bottom of the jar, and they're such nice jars I've just cleaned them out and am using them as drinking glasses! The sheer variety of scents is amazing and some of them are really rockstars when it comes to scenting the whole house, especially the fall scents (Harvest Festival and Pumpkin Spice), Nice Melons, and anything heavily vanilla scented (so anything with Vanilla or '& Cream' in the name).

Barely even cons: The wick tends to pull up lots of wax, leaving these big black bulbs at the end. If you leave them alone they'll make the candle flame bigger, which burns the candle faster. But if you make sure to trim the wick, you won't have that problem (Note: I received an unexpected pair of wick scissors when I ordered the Sassy Pack, which was a pleasant and useful surprise!). Once you get about halfway through the candle, the flame will start leaving soot in the top half of the candle. I personally don't care about that, but I can see how someone who was more concerned about the aesthetics might find that bothersome.

Con: The potency and accuracy of the scent is pretty hit or miss. I'd say I've gotten about 50/50 on candles that fill the house with scent (see those listed in pros) and candles that smell really nice but only within about a 4' radius. One unexpected experiment was getting a Cinnamon scented one and a Hot Buns (also cinnamon scented). The Hot Buns filled the whole house with cinnamon scent, but the Cinnamon was one you only smelled if you were within that 4' radius. Regarding accuracy, I mostly refer to a couple of candles I've gotten that the scent was... a little off. The Hot Chocolate one has a habit of vacillating between a nice hot cup of cacao and a melted tootsie roll on a summer sidewalk. Both very nostalgic, mostly pleasant scents, but makes for a strange candle experience. The Banana Bread (such as in Smell My Nuts) smells very much like artificial banana flavoring, like banana Runts or Circus Peanuts (did you know those are banana flavored?!). Again, not necessarily bad - just... strange. The problem is that with a few exceptions, it's hard to know whether you'll get a fills-the-house scent or a 4'-radius scent.
阅读更多
7 个人发现此评论有用

Andreas
4.0 颗星，最多 5 颗星 Great candles overall. The particular flavors were not my favorites.
2019年10月3日 - 已在美国亚马逊上发表
香型: Grab Nuts Pack已确认购买
I have posted reviews about this company before. They make the best scented candles that I have ever purchased. However this particular combination was not my favorite. I don't want to extrapolate too much though since scent and flavor varies across people. My definite favorite is the banana nut bread and second favorite is the cinnamon. Definitely try those out.
阅读更多
2 个人发现此评论有用
加入亚马逊Prime，从此免运费
亚马逊Prime会员可享海外购美/英/日/德跨境免邮，全年无限次！更有免费无限次阅读电子书服务
> 立即加入
了解我们
合作信息
支付方式
帮助中心和购物指南