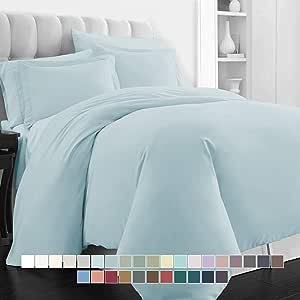 Chautona
5.0 颗星，最多 5 颗星 My go-to sheets for comfortable sleep.
2018年7月6日 - 已在美国亚马逊上发表
已确认购买
Let's see...
1. They are not my old sheets that ripped right up the middle when my husband rolled over one night. That alone makes them rather awesome.
2. They have SUPER deep pockets. I have a mattress that is so thick one would assume it had decided to try to out a fraud for a princess all by itself. These sheets, unlike another set relegated to the depths of a drawer for reasons I don't even know, actually stay ON the mattress. I really should toss those other, immodest sheets with their midriff-showing nonsense.
3. The top sheet is deliciously long. I managed to tuck that sucker in and even my very tall husband and his enormous feet can't kick it out if I bother to make the bed every day. I don't, but if I did, he couldn't do it. As it is, it still takes almost until washing day to work the end out from under the mattress. #wifeforthewin
4. The fabric is sturdy, but doesn't feel like it was made from burlap like many sturdy sheets. Instead, it's as soft as a baby's bottom (but cleaner, I assure you) and appears to be able to endure my husband's sandpaper feet. This is a feat, I assure you. #feetandfeat
5. While the color selection isn't phenomenal, I won't mistake them for the aforementioned immodest sheets. Those scarlet women (yes, they are red) have scarred me for life anyway.
阅读更多
425 个人发现此评论有用

Teresa
5.0 颗星，最多 5 颗星 Smooth, soft and strong
2018年4月5日 - 已在美国亚马逊上发表
已确认购买
This is my second set of these sheets and I love them. They are smooth and soft, yet they feel strong. My first set I’ve washed 7-8 times and they’ve held up really well; so well I wanted another set of these sheets. They do wrinkle easily if you don’t put them on the bed while they are still warm from the dryer but that doesn’t bother me. I had tried other types of sheets that were the “microfiber” ones and while they were super soft, I felt like my pajamas stuck to them when I was in bed. These sheets do not feel like those microfiber sheets at all which is what I was looking for (a smooth, cotton feel)....and a king set for this price was a good deal to me. I would totally recommend buying these sheets.
阅读更多
150 个人发现此评论有用

I spent over an hour looking for a good quality, but affordable duvet cover. A lot of options out there are either lying about their thread count ($25 1200 thread count duvet cover? Yeah, no.) or are microfiber. I was originally looking for Egyptian Cotton, as that's sort of the high quality standard, but all decent Egyption Cotton duvet covers seemed to cost in the triple digits.

Pizuna Linens talks about the quality of their cotton. You really don't see that in most products like this. It's a really good sign. The picture of the duvet cover looks great too - very plush, next to no wrinkles. Great.

In reality, they're... pretty close to what you see in the picture. My duvet insert is thinner than the one they used, and I haven't used fabric softener or done anything to remove the wrinkles it has from being in the package, but it's pretty close to the picture despite that. These duvet covers are soft. They're high quality. They're a better value than what I saw of duvet covers in this price range (~$40), and potentially as good or better than a lot of more expensive duvet covers, at least until you get to the $100+ range.

These may not be Egyptian Cotton, but they're legitimately good quality cotton, they're soft, and they're awesome. Definitely recommend.
阅读更多
89 个人发现此评论有用