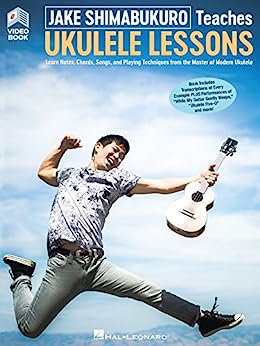 英语版本 Jake Shimabukuro (作者) 格式: Kindle电子书
|
分享
分享 <分享样章>
广告
显示所有 格式和版本 隐藏其他格式和版本
(Ukulele). Learn notes, chords, songs, and playing techniques from the master of modern ukulele! In this unique book with online audio and video, Jake Shimabukuro will get you started on playing the ukulele. The book includes full transcriptions of every example, the video features Jake teaching you everything you need to know, and the audio features recordings of all the examples. In addition, the video includes performances of Jake playing some of his most popular arrangements such as "While My Guitar Gently Weeps" and "Ukulele Five-Oh," among others. The audio and video is accessed online using the unique code inside each book and can be streamed or downloaded. The audio files include PLAYBACK+, a multi-functional audio player that allows you to slow down audio without changing pitch, set loop points, change keys, and pan left or right.
阅读更多
Previous page
Next page
由于文件较大，下载时间可能较长。
›  查看更多商品促销信息

l2
2.0 颗星，最多 5 颗星 thin book with short videos and not enough tutorial information
2019年6月22日 - 已在美国亚马逊上发表
已确认购买
I really wanted to like this book because I love Jake's concerts, but I think the material is too thin to learn from. The printed book is just sheet music to go along with the videos. The videos are short. There are 14 videos that are mostly 5 to 10 minutes each. The first 9 have some basic tutorial information, but IMHO not enough for a beginner to start playing interesting songs on their own. The last 5 videos are mostly performances by Jake that look and sound great, but there is no way a beginner can play along with him using just the tutorial information in the earlier videos, no matter how much you practice. If you're looking for a ukulele tutorial book, I think there are many better choices than this one. If you want to see Jake play the ukulele, go to his concerts or watch him on YouTube.

The only reason to buy this book is for the detailed sheet music of some of his songs. 43 pages of the book are in the "Bonus Song Transcriptions of Live Video Performances" chapter, which is all sheet music. Be warned that this is much more complicated than the tutorial videos, so you will have to look elsewhere to learn how to play them.

lilcreative
5.0 颗星，最多 5 颗星 Phenomenal
2017年5月19日 - 已在美国亚马逊上发表
已确认购买
Jake is an extraordinary performer, genius, truly, and equally as excellent a teacher. This is a remarkable gift to ukulele students everywhere; there's some solid info for beginners, though they may well want to practice for quite awhile before moving on to Chapter 3, because he really takes you for a ride at that point, sharing techniques that make him, well, the master that he is. What a generous offering; Jake goes above and beyond in the delivery here. The book is wonderful quality, and the videos? Unparalleled. I'm so grateful for this resource; thank you Jake.

If you're on the fence about this book, climb on down; Jake's a master, and he's gone ahead and made some of his best techniques known here - and he demonstrates so patiently, so clearly, it's remarkable. Go for it!
阅读更多
17 个人发现此评论有用

PediatricianMom
3.0 颗星，最多 5 颗星 Confused whether this was for beginners or advanced players; can't meet needs of both.
2017年6月21日 - 已在美国亚马逊上发表
已确认购买
This book is a great way to start, but it certainly won't get you to where you want to go if you only use this book. I have a strong musical background (majored in piano, also played woodwind instruments and dabbled in the guitar), so I picked up the ukulele pretty quickly. The first few chapters start out perfectly with 1-finger chords, 2-finger chords, then 3-finger chords. That makes sense. He does makes some "substitutions" like doing a 1 finger F chord that is really an F chord with an added G. It doesn't quite make sense to me to teach it that way since the "normal" F chord isn't that hard in the first place. Might as well learn it correctly. He also teaches an A7b9, A9, and D13, but never gets around to teaching the basic D chord.

He then goes on to teach some basic chord progressions. I have two issues with these. One is that some of them required jumping from the 2nd fret to the 7th fret. That's a really big jump for a beginner. Secondly, he plays them very quickly for beginners. He could have played a slow version and a fast version. He doesn't give any tips for making those big jumps at that high speed. If you were already a seasoned guitar player, then maybe it would seem easy to you, but then again, you would have been bored by the first half of the book.

In chapter 10, he started with very basic picking. Turn the page, and suddenly you've got a highly advanced version of Ave Maria! Of course he plays it absolutely beautifully on the video, but there's no way that a beginner could possibly master it. It's a bit discouraging because there's no steps for getting from that beginner stage to the advanced stage. Just one giant leap. He finishes with chapters on strumming techniques and tremolo picking, but never goes over muted strumming or hammer on/pull offs. I would have loved a few songs that a beginner or intermediate could play.

The book ends with the music for some of his great songs, like the Celtic Tune and Dragon, but you would have to be highly advanced to play them.

Overall, I still like the book and the accompanying videos because Jake is just a cool guy. He's humble and funny. He's much more fun to watch on a video than the vast majority of amateurs that you see on YouTube. I just think that this book needs to be supplemented with a lot of other material and perhaps he needs a series for beginners, intermediates, and advanced players. On its own, it falls short for beginners and it falls short for advanced players. Other reviewers compliment it for having something for everyone, but really what you get is only a few chapters which can apply to you, whatever stage you're at.
阅读更多
55 个人发现此评论有用

A. E. Drury
5.0 颗星，最多 5 颗星 Like Jake, book goes from zero to sixty really fast.
2018年11月26日 - 已在美国亚马逊上发表
已确认购买
An excellent book with not only great tablature but some excellent stylistic tips as well. I will mention a pretty common problem with instructional music books that feature advanced techniques, the change from beginner level to advanced playing is sudden. Turn a page, and you jump from simple chord solos to full on scores. That said, it is probably one of the best books out there for examples of using alternate chord positions to find the melody notes within progressions. Lots of good stuff to take away from the studies even if playing the material note for note is as of yet beyond you.
阅读更多
5 个人发现此评论有用

Kindle Customer Colville
1.0 颗星，最多 5 颗星 Music in book is different than in the video
2020年2月14日 - 已在美国亚马逊上发表
已确认购买
I bought the book for Kindle at first but then discovered the music wasn't clear enough to read the numbers on the tabs, so useless. So I ordered the written book and went right to the song I most want to learn, "While My Guitar Gently Weeps" only to discover I still can't play along with the video as the music isn't the same. I don't know what that's supposed to be, but it doesn't sound anything like "While My Guitar Gently Weeps".
阅读更多
1 个人发现此评论有用