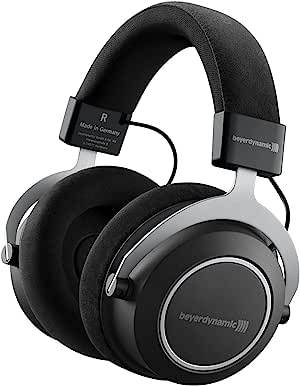 The Aventho wired makes all these details and NUANCES entirely visible. When we turn our attention to the smallest of things, a wonderful world of discovery unfolds - with music, for example.

Jill Lazear Allen
1.0 颗星，最多 5 颗星 DO NOT BUY -- NO CUSTOMER SUPPORT IF THERE IS A PROBLEM
2019年3月5日 - 已在美国亚马逊上发表
耳机款式: Amiron wireless black已确认购买
DO NOT BUY -- TERRIBLE CUSTOMER SERVICE.

Do yourself a favor and stay away from this product. The sound is good when it works, but you are on your own if there is a problem. Customer service is non-existent.

These headphones worked fine for several weeks. I agree with other reviewers that the volume is low, but you can turn up the volume and the sound is otherwise quite good. The problem is that after several weeks, the headphones stopped receiving sound through the Bluetooth connection. They connected and paired, but there was no sound. I tried to find answers on the company website, but good luck with that. There is not much help available. I scoured the Internet for information. Not much there either. I did try all potential fixes I did find -- resets, plugging and unplugging the wired connection, etc. -- but nothing worked. The headphones worked with the wired connection, but not via Bluetooth, and this was the case when I connected them to different devices (e.g., iPad and iPhone).

These headphones are very expensive -- almost $600. A problem this basic should not happen -- and if it does, Beyerdynamic should be rushing to be responsive to customer issues. Nothing. This is the worst customer service I have ever seen -- ever. Extremely frustrating, and in the end I am totally disgusted and throwing in the towel on this product and anything associated with this company.

One further point: the side of the right headphone is designed to function as a kind of track pad, allowing you to increase and decrease volume, fast forward and rewind, etc. When you use a track pad on a computer, you have visual feedback on the screen. With these headphones, however, you cannot tell if it is really working correctly. I hated it, but I would have stuck with it if the headphones actually worked.

In short, this is potentially a very good product, but there is no support from the company, so if you run into any problems then you are out of luck. Flaky product. Terrible company.
阅读更多
41 个人发现此评论有用

William Martin
1.0 颗星，最多 5 颗星 Simply put, do not buy these
2019年3月3日 - 已在美国亚马逊上发表
耳机款式: Amiron wireless black已确认购买
Simply put, do not buy this headset. I have owned so many Beyer products over the last 15 years. Numerous DT line sets, from low end to studio, a pair of MMX-300's for gaming (which i believe is the best gaming headset) and now this pair of Amiron Wireless phones.

Why did I buy these:

APTX-HD/LL - I am an audiophile and I have been wanting a quality pair of over the ears, with quality bluetooth. These Amiron Wireless phones have that tech, including APTX-HD and LL. If you have the ability to output in that mode, you will be impressed with the sound quality over bluetooth. It also makes it great for watching TV/Videos on bluetooth, as the lag is nearly unnoticeable. Key word, nearly.

USB-C charging, trying to go all USB-C was a personal thing for me, so I like the faster charging and compatilbility with my other devices.

Passive ability, you can plug in the 3.5mm jack and use the set passive, even if its dead or charging.

I trust Beyer and have enjoyed their products for over a decade, so I assumed they would think through the design before releasing the product.

The sound quality is unmatched in a wireless/bluetooth over the ear set.

Boy was I wrong. First off, a month into ownership the headphones will not turn on. Sure that might just be bad luck, no biggy, warranty will cover.

THE SINGLE BIGGEST ISSUE. These are the worst sealing pair of headphones I have ever owned. Now stop for a second, I know that Beyer is notorious for this, however, my head fits Beyers. That is probably why I have loved them for so long. My MMX-300's are some of the best fitting, not too tight, not too lose, doesn't hurt after hours of use, doesn't slip off my head or move around during intense gaming, headphones I own. A supposed to be wireless, twice as expensive set? Nope, worst fitting, constantly slipping off my head, essentially no seal around ears phones in existence. The audio quality? It is amazing, but it suffers massively due to the poor seal. If you slightly press these to your ears or put on a sort of headband to push them against your ears, they sound absolutely amazing. But is that really what I want to do to get good sound and not have a pair of $600 headphones fall off?

This is poor design. There is no other way around it. If this was the only pair of Beyers I ever owned, I would think twice, but it's not. Why make a nice pair of wireless headphones, that can't stay on your head? Or seal out a bit of outside noise?
阅读更多
31 个人发现此评论有用

Brett Cochran
2.0 颗星，最多 5 颗星 Really disappointed!
2018年10月19日 - 已在美国亚马逊上发表
耳机款式: Amiron wireless black已确认购买
I just gave these headphones 5 stars in several catagories, and yet giving them 2 stars overall, and I am sure you might be wondering what gives. Well, volume is what gives, or should I say doesn't give. The volume of these cans is extremely low, painfully so when using Bluetooth. While the sound eminating from them is fantastic, great bass, treble, mids, and amazing depth. But they simply do not get loud enough to fully enjoy. Plug them in you might suggest, and yes the volume increases some, but so does the distortion. Plugged into my Mojo, I have to turn the volume way down, because they simply cannot handle it. I then plug them directly into my AK70MKII, and they handle it better, but still a far cry from optimal. I have cans that I have paid much less for, that sound great, have much more volume (even with Bluetooth), and don't get distorted by the slightest boost in power. Really sad, actually, because the incredible sound coming from my Armirons is so good, I need to hear it with a little more oomph.
阅读更多
18 个人发现此评论有用

Andrew H.
3.0 颗星，最多 5 颗星 Beware when using for gaming/streaming!
2018年9月13日 - 已在美国亚马逊上发表
耳机款式: Amiron wireless black已确认购买
I ordered the wireless version of these headphones along with a low latency Bluetooth transmitter in hopes to use this on my Zoom LiveTrak L-20 mixer for gaming/streaming. No matter what device I tried these on there was a slight delay (maybe half a second?) this includes watching YouTube videos with a direct connection to my iPhone 7 Plus. I wanted to love these but the delay is real bummer. The sound quality was pretty good and that made the experience enjoyable when listening to non video related music. I also want to note that they were also a little loose on the head and would slip out of place if moving your head too quickly. I don’t like headphones that are too tight because they can feel painful on your head after long periods of use, but these were leaning too much towards the looser side.
阅读更多
17 个人发现此评论有用
加入亚马逊Prime，从此免运费
亚马逊Prime会员可享海外购美/英/日/德跨境免邮，全年无限次！更有免费无限次阅读电子书服务
> 立即加入
了解我们
合作信息
帮助中心和购物指南