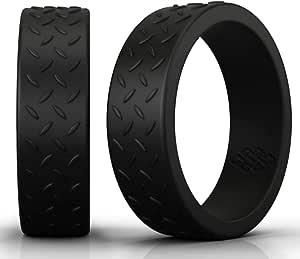 T. J. Young
3.0 颗星，最多 5 颗星 An OK Ring...
2019年6月17日 - 已在美国亚马逊上发表
已确认购买
I own a lot of rings. Quite a few of them are silicone rings. This one was the hardest feeling and thickest out of all of them. I ordered the thin blue line version, and the line itself was extremely big as well.

Attached is a photo comparing one silicone ring (Qalo, left) with this one (right). You can see how much thicker it is, the line doesn't blend very well, and you'll just have to take my word on the hardness quality.

My Qalo ring has some tears in it, so I won't be wearing it anymore. In the meantime I'll wear this one if I'm doing any work and going back to my Tungsten ring when I'm not working for the look and comfort of that ring.

Overall it's just ok. Probably won't buy another one unless they slim it down and better blend the line.
阅读更多

Parkern
5.0 颗星，最多 5 颗星 Perfect Silicone Ring, Haven't Found Another Like It
2017年1月26日 - 已在美国亚马逊上发表
已确认购买
This ring is exactly what I was looking for. I don't like how wide other silicone rings are. Because this one is not wide, I literally don't even feel it on my finger, it feels like you're not wearing anything. I bought it to wear to the gym, and used to wear my tungsten ring everywhere else. After two weeks of that, I switched to the silicone ring 100% of the time. It's just so comfortable. I have a job where I present to executives, so I wanted something that is sleek, professional, and doesn't draw attention to itself. I got the black one and it looks great, it doesn't stand out or draw attention to itself.

By the way, these do eventually wear down. The beveled edge on mine isn't there anymore, it's just rounded all the way across the ring, with no sign of where the bevels even used to be. However, I've had two of these so far, and neither one has worn down to the point where it has broken. I had the first one for about a year and lost it in the ocean, and have had my second one for another year. They seem to be pretty durable, I think you'd have to pull on it really hard to tear it.
阅读更多
6 个人发现此评论有用

Albert
5.0 颗星，最多 5 颗星 One of the Best Silicon Rings Out!!!!!!!
2017年1月25日 - 已在美国亚马逊上发表
已确认购买
No Complaints Whatsoever !!!! This ring is nice, comfortable, doesn't snag in your pocket and doesn't slip off your finger. Now my wife wants one. I much prefer this than a $1,000 ring that could slip off, potentially loose or get stolen. I got white which symbolizes Purity, Newness, Living My dreams Everyday, and Power to achieve anything I set my mind too.
阅读更多

daveelcapo
5.0 颗星，最多 5 颗星 Helps me score tons of (well just one) chicks
2017年4月11日 - 已在美国亚马逊上发表
已确认购买
I have tried several of these silicone rings, and finally bought one that was on the higher priced side. Don't regret it at all. There isn't any "excess", or material that should have been removed, around the edges like cheaper options I have purchased. I will say it was a bit thinner than I expected, but turns out after a couple days I decided I really like that about the ring. I love the lower profile and the beveled edges. I used to feel like I was wearing a toy car tire with cheaper options I tried. I wear it at the gym, wear it to run, wore it in a Spartan race recently, and it has been awesome and looks good as new so far. I'm sure I'll break it eventually, but for twenty bucks a pop, well worth it. I have seen complaints about getting a sweaty finger, but I don't really have any issues there. Also, fit was spot on for me. Plus, it helps me pull tons of chicks. Well, at least one chick anyway, but she's effing hot.
阅读更多
5 个人发现此评论有用