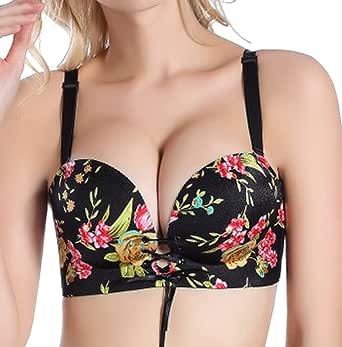 Kay
3.0 颗星，最多 5 颗星 Mediocre knock off
2018年3月4日 - 已在美国亚马逊上发表
已确认购买
I love this style of bra.. I have ordered two already in a different brand called "fallsweet". In comparing the two, the other brand is much better. I was interested in these due to the cute colors.. But the fabric is not the same soft fabric and it runs much smaller. I am a tiny bodied person and the straps were still very tight even after I extended them to the longest setting. I am size 32C and ordered 32C, it was tight. I'm 5'8" 120lbs.
阅读更多
19 个人发现此评论有用

Suz
4.0 颗星，最多 5 颗星 Pretty good!
2019年3月29日 - 已在美国亚马逊上发表
已确认购买
Good bra that does what it says. I am normally a 36D; I ordered the 38C and it fit me well on the smallest band adjustment hooks. (This bra is nearly identical to one I bought from another seller. I bought from two different sellers because the other seller had better reviews... but this seller had the red color I was looking for!)

I'm knocking off a star, however, because when I use this as a strapless bra, it does NOT stay up. Here's why: most strapless bras have silicone strips on the inside portion of the band, running along the edges. These do NOT have the silicone edging, so the bra will slide down your ribs and you'll have to keep pulling it up. I'm trying to think of a solution for this and will probably end up doing some after-market modifications because, as I said, it's a pretty good bra with the straps, and I suspect it would also be a good bra without them if it didn't keep sliding down. (For what it's worth, the nearly-identical bra that I bought from the other seller has the exact same issue.)

Apart from falling down in "strapless mode," this is a pretty darn near perfect bra that will give you instant Jessica Rabbit proportions. :)
阅读更多
9 个人发现此评论有用

Jay&Be
4.0 颗星，最多 5 颗星 Great Quality, Great Customer Service.
2018年8月7日 - 已在美国亚马逊上发表
已确认购买
I ordered 2 bras 1 red and 1 silver. The silver had fit but the red was too large. The seller exhibited awesome customer service by sending me another red bra that was a size smaller without having to charge me or having to send back the other bra. After wearing both bras for some time, I can confidently say they are of good quality, not flimsy, awesome color. Overall I'm very happy with this purchase.
阅读更多

Edit: so the company will take bra back but you only get 25% refund even tho they never mentioned there being "essential oil" bags with "messaging beads". Cute bra but if i ever plan on wear this bra ill have to cut out the oil bags. Probably give it to my cousin whos a 34b and would fit more comfortable.

EDIT: So i was given a refund but i still wouldnt recommend the bra to anyone.