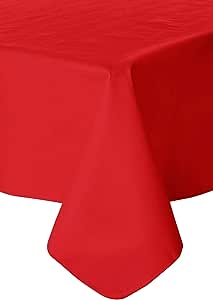 K. Joe
3.0 颗星，最多 5 颗星 Consider all reviews before purchasing
2017年6月4日 - 已在美国亚马逊上发表
尺寸: 52"x108" Oblong (Rectangle)颜色: 海军蓝已确认购买
I bought this tablecloth less than a week ago with the intention of having it on my patio table. When I first put it on, I was exceedingly pleased; indeed, I was ready to order another one for my second outdoor table that I use for serving. Nevertheless, after having eaten on it now twice, I am definitely going to rethink that idea. I read the many reviews that spoke about stains not coming off, but I wasn't worried as I purchased this in navy...a very dark navy. Imagine my surprise to discover that our second dinner has left dark marks all over it! I was concerned that some salad dressing might leave a stain, but that came up. These stains were marinara sauce. Since the salad dressing did not leave a mark, I must contend that it is not the grease, but rather the red color of the sauce that has left a stain. If I had had the tablecloth for even a month, I probably wouldn't complain, but come on, I've used it twice!!!!!! I have searched for a vinyl tablecloth for a month trying to find one that wasn't going to be necessarily "disposable" after just a few uses. This on is really heavy duty -- like upholstery cloth -- so in that respect it's great; however, if I already have stains after the second use, what is it going to look like by the end of summer?!!!! I will say this: I was not frightened off by the carcinogen warning; I read several articles on the subject and unless you are going to have it get very hot or you intend to burn it, it will not produce emissions. I wouldn't let that scare you away.
阅读更多
5 个人发现此评论有用

Donm8r
5.0 颗星，最多 5 颗星 Heavy duty and very durable.
2019年2月17日 - 已在美国亚马逊上发表
已确认购买
A little heavier then expected but i`m actually happy about that. A few minor issues. It slides just a little but nothing major or troublesome. It also hangs off the edges of our table approximately 4" - 6" and I`m just recently noticing a slight curling on the edges but again not a major issues at this time. Over all I am very happy with this purchase.
阅读更多
2 个人发现此评论有用

hoped for....but, I have to say that upon opening there is a NOTICE that states this product is known to cause cancer per California Prop whatever! This does not make me very enthused about using it now especially around food!

If I had known this before I purchased it....I wouldn't have.

rhonda
1.0 颗星，最多 5 颗星 Find a way to remove wrinkles from vinyl or pass
2020年2月2日 - 已在美国亚马逊上发表
已确认购买
I love the thickness and quality of this but the wrinkles haven’t come out after 2 weeks and it looks sloppy. They aren’t even nice even lines it looks like someone rolled it up and the wrinkles are random and deep. Total bummer.
阅读更多
1 个人发现此评论有用

Kindle Customer
4.0 颗星，最多 5 颗星 Perfect
2013年2月26日 - 已在美国亚马逊上发表
已确认购买
I bought this in burgundy. It's a little darker then I wanted, but it looks great and I've gotten lots of complements. It's extremely thick and great for just wiping up messes. The thread is very red that's used along the edges, so that could be improved upon, but you don't really notice once it's on your table. I have a 4 year old, 2 year old triplets and a 6 month old. This is great. We've painted, played with playdough and of course the messes at meal time. My kids ruined one of the cheap ones you buy in the grocery store within 2 days. They actually ate a hole in it (boggling). This one we've had up for a few weeks now and it's holding up great. Well worth the price.

Also I had issues with other table clothes slipping off the table. This one stays in place extremely well. If this didn't work I was looking at a custom made fitted table cloth that would run about $80. With how well this one is doing I don't think I'll need to get the custom made one. Hooray!

UPDATE: I bought this January 29, 2013 and it's now May 13th, 2015 and I'm here to look at colors and maybe buy another one. This has held up GREAT!! With 5 young kids we've used this for playdough, cooking, sand, painting and of course eating. It's been easy to wipe down. I've caught kids stabbing it with their forks and other destructive things. It has one small cut in it and that's it. I'm super pleased and just thought it might be nice to have a 2nd one in a different color. This one does have some spots from permanent marker and acrylic paint that didn't come all the way off. So a "nice one" for company might be necessary.
阅读更多
1 个人发现此评论有用
加入亚马逊Prime，从此免运费
亚马逊Prime会员可享海外购美/英/日/德跨境免邮，全年无限次！更有免费无限次阅读电子书服务
> 立即加入