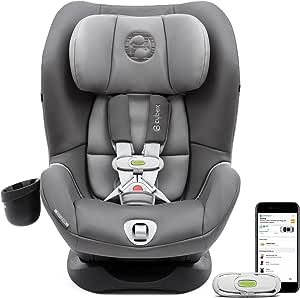 2. Cup holder INCLUDED? YES! Unlike so many of those high priced other car seats, you don’t have to shell out extra for something every car seat needs.

3. Fits baby to preschool? OMFG yes! I liked it so much with the newborn that I also tested it on my giant 21 month old in 3T (yes, he’s huge), and a 3 year who is 40” tall and 42lbs (giant!). They all fit. And it was sooo easy to adjust. [Note-I only tested forward facing with the 3 year old]. *I do wish the seat went to 50lbs rearfacing, but we all know that “most” kids never need that weight limit before a booster.

4. Harness pads! Yes, and they’re grippy so they don’t get into weird places around your baby’s neck. They move up and down with the headrest adjustment like magic!

5. Comfortable easy clean fabric? YES! Spit up just wiped up like magic with a damp rag and the seat was still comfortable on a 90 degree day.

6. Recline positions? This is the easiest seat to pick a recline position for, you have so many options no matter how weird the slope of the back seat. Plus you can recline slightly when FF which guarantees some sleepy dust for younger forward facing kiddos.

Last but not least... the sensor. So easy to use and even as an experienced mom, I felt so reassured that baby would never be left in the car on a hot day. The app is easy use and setting up the sensor took me just a couple of minutes. This should be on every single car seat sold.

Mute Mavelle
3.0 颗星，最多 5 颗星 Great Car Seat with some faults
2019年2月6日 - 已在美国亚马逊上发表
颜色: Manhattan Grey已确认购买
So this is a great car seat. However, I mainly bought it for the SensorSafe feature and it hasn’t a of problems. So the sensorsafe chimes whenever you turn off your car to remind you that you have a child in there. I think this is great. However, the alert system constantly goes haywire. My husband kept getting alerts on his phone that my daughter was left in the car when she was in my hands next to me at Target. The buckles were not engaged. The alerts did not stop at all. I had to cancel my profile and take the app off my phone to get it to stop. I reinstalled it and tried again. Every now and then it will do the same thing. It does alert me with useful information... like if my car is too hot, or the clip is unbuckled. I did run into a store while my husband and children were in the car with my baby and it alerted me that my child had been abandoned. So the device depends on the phone proximity of whoever set up the account specifically. It’s a great idea, but it can drive you a bit crazy. However, the car seat itself is great.
阅读更多
12 个人发现此评论有用

Bret
4.0 颗星，最多 5 颗星 Cool, comfortable, and SAFE
2018年5月24日 - 已在美国亚马逊上发表
颜色: Manhattan Grey已确认购买
This is a beautiful seat. My 5 month old is very comfortable once we are going, and the lighter color makes me think he isn't as hot (he is a sweaty kid, and hasn't come out of it sopping!).

Installing it the first time was tricky, but with some extra manual references it was okay. I think it would be easier after we were used to it. My husband didn't think it was tight enough with the latch system, even after he pressed it in as hard as he could (at 350 pounds). Because of his concerns, I brought it to a car-seat tech and she said it was fine. Make sure you check the tightness at the base, as the top "wiggles" but doesn't mean it's not safe.

Rear-facing, I find the release button awkward to reach to extend the straps. It's also gotten easier with practice, though when I pull it tight, the plastic cover looks like it's going to pop off from the sideways pressure (hard to pull UP and straight with the seat-back of the van in the way). But they go in and out smoothly.

The "bumpers" around the belt seem very comfortable for my son once the straps are tight. Though the leg straps sit on his thighs in a funny way (I also checked with the car-seat tech about this, and she assured me it is safe). It's like the straps connect to the seat lower than I'm used to, so the straps don't cross his hips. This makes it a little hard to tighten without ensuring I tighten his lap properly, then tighten the shoulders. Again, a learning curve with this seat, but not bad.

The magnetic attachment for the straps when they are open are a neat feature, but not always practical (it's hard to see where it is on the far side). The more I use the seat, the more muscle memory I'll make for that feature.

All that said, my son loves to ride, he is comfortable, cool, and most importantly safe.
阅读更多
12 个人发现此评论有用

Volgirl
5.0 颗星，最多 5 颗星 Love it but a couple things...
2018年8月30日 - 已在美国亚马逊上发表
颜色: Manhattan Grey已确认购买
The great: I love the safety features. The plug in makes a ding noise/chime when you turn off the car and the strap is still buckled. I was afraid that I would grow accustomed to the ding when turning off the car, but that’s not gonna happen. It’s not annoying or anything, but it’ll get your attention for sure. The fabric is sooo soft I wanna sit in it! Also the head support piece is easily adjustable and the seat is easy to install.
The good but could be better: I found the straps tough to adjust initially. Eventually I asked my husband why it looked so easy for him and it turned out I would accidentally rest my forearm on the long strap you pull to tighten when I was trying to push the button to loosen. Now that I know that it’s much easier, but there is something odd about the design. Also it’s nice that it has a cup holder, but it seems kinda far from her reach (she’s very petite though so it could just be her).
The not so great: the soft beautiful fabric has started to pill. She likes to rub her calves back and forth on the seat for some reason (I guess because it’s soft) and it’s starting to show wear. We’ve had it installed for two months.
阅读更多
10 个人发现此评论有用

Heather
5.0 颗星，最多 5 颗星 BEST CAR SEAT IVE EVER PURCHASED
2018年5月15日 - 已在美国亚马逊上发表
颜色: Manhattan Grey已确认购买
AMAZING CARSEAT. So soft. Comfortable. Incredibly high tech and all car seats need to have this type of technology. I’ve previously bought Chicco and Graco for my older son and they don’t even compare! Chicco is better than gracco but Cybex is light years better than Chicco. I’m now about to buy a cybex seat for my 5 year old as well.
阅读更多

5.0 颗星，最多 5 颗星 BEST CAR SEAT IVE EVER PURCHASED
2018年5月15日 在美国审核
AMAZING CARSEAT. So soft. Comfortable. Incredibly high tech and all car seats need to have this type of technology. I’ve previously bought Chicco and Graco for my older son and they don’t even compare! Chicco is better than gracco but Cybex is light years better than Chicco. I’m now about to buy a cybex seat for my 5 year old as well.
该评价的图片