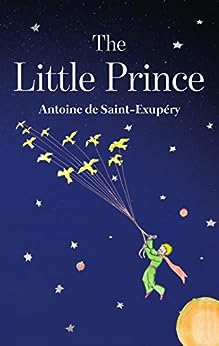 A pilot who has crash-landed in the Sahara Desert wakes up the next morning to a strange voice. 'Please … will you draw me a sheep!' it says. The voice, as he soon finds out, belongs to a little prince who has left his tiny planet to travel the universe. In response to this little man's many curious questions, the pilot begins to draw a number of images and slowly comes to understand the truths about life in all its peculiarity and strangeness.
The Little Prince was first published in 1943 and has since been translated into more than 250 languages. A remarkable story told with enduring charm, it soon became one of the most widely read books in the world and continues to delight readers of all ages.

From Publishers Weekly
Young Osment (The Sixth Sense; Pay It Forward) again proves his mettle as an actor, giving voice to the Little Prince in this crisp, full-cast production of the literary classic. He approaches the role with a gentleness and sensitivity that touches the heart and never sounds maudlin. As the pilot whose plane has crashed in the Sahara, Gere plays it low-key, creating a perfect partner for Osment's interplanetary-traveling, wise-beyond-his-years prince. Gere expresses just the right mix of amusement and bewilderment as the prince interrupts the pilot's efforts to repair his plane with a request that he draw a sheep. The adept performances capture the timeless nature of Saint-Exup‚ry's fable about how a child sees the important things in life much more clearly than many adults do. All ages. (Dec.) birth.

From School Library Journal
Grade 2-6-Antoine de Saint-Exupery's classic allegory is presented with the original whimsical watercolor drawings and animation accompanying the translated text. The story may be read alone or with animation and sound. Actor Kenneth Branagh has the role of narrator, and 12-year-old British actor Owen Evans is the voice of the Little Prince. The CD-ROM includes a biography of the author, a diary notebook for users to write in or create their own stationery, panorama pictures, and "The Fox Taming Game." The story will delight young readers, and its meaning will stimulate thinking for older ones. The game to tame the fox involves a lot of waiting and lacks action. The animation, photos, and narration are excellent. Much of the product responds slowly, so patience is required. On screen help and printing are not available except for the diary. Installation is easier on the Macintosh than on the PC. It is necessary to change the number of colors on the monitor and to install the specific version of QuickTime that is included on the CD-ROM. The review copy was a Beta version and did not allow access to all parts of the CD-ROM for review.
Ann Elders, Mark Twain Elementary School, Federal Way, WA
Copyright 2000 Reed Business Information, Inc.

From AudioFile
At first, Richard Gere's pause-laden, melancholic narration seems affected, but as this fable of childhood wonder and adult folly unfolds, the sad, quiet tone feels entirely appropriate. As the Little Prince, guilelessly portrayed by The Sixth Sense's Haley Joel Osment, leaves his tiny planet to journey across the universe, he encounters characters who embody greed and futility, and finally a fox who, in a brief but standout performance by Adam Frost, asks to be tamed. Gentle, contemplative music underscores the story, and by the end, the Little Prince has learned that the weightiest matters in life--bonds of friendship and responsibility--are the most intangible. Saint-Exupéry's pilot has been changed irrevocably by his encounter with the Little Prince; listeners will doubtless feel the same way. J.M.D. © AudioFile 2001, Portland, Maine-- Copyright © AudioFile, Portland, Maine

From School Library Journal
YA-This new translation into "modern" English brings a classic tale into sharper focus for today's teens without sacrificing the beauty and simplicity of the author's writing, and the "restored" artwork has all the charm of the original drawings. What appears to be a simple tale of two lost souls-one, a pilot marooned in the desert next to his ditched plane; the other, a minuscule prince in self-imposed exile from an asteroid so small that he can watch the sunset 44 times a day-reveals itself as something far more complex. What appears to be a fairy tale for children opens like the petals of the Little Prince's flower into a fantasy that has lessons for all of us.
Molly Connally, Kings Park Library, Fairfax County, VA
Copyright 2000 Reed Business Information, Inc.

ANTOINE DE SAINT-EXUPERY (1900-1944) was born in Lyons, France. He took his first flight at the age of eleven and became a pilot at twenty-six. A pioneer of commercial aviation, he flew in the Spanish Civil War and World War II. His internationally celebrated writings include The Little Prince; Wind, Sand and Stars; Night Flight; Southern Mail; and Airmans Odyssey.  --此文字指其他 kindle_edition 版本。

Amazon Customer
5.0 颗星，最多 5 颗星 The first book I’ve read wholly
2021年5月2日
已确认购买
As a beginner reader, “The Little Prince” was the first book that I had finally made up my mind to finish reading, and so I did. It didn't require many vocabularies, so if you are a BR like me with limited vocabulary, the book may help you build up your interest in reading more books.
阅读更多
1 个人发现此评论有用
有帮助
报告滥用情况

Lydia
4.0 颗星，最多 5 颗星 classic
2018年1月16日
已确认购买
I like classic and I like the fun story. This is a children's book for the beginner of English learner. The story is simple and fun. It's not very difficult for them to understand it.
阅读更多
有帮助
报告滥用情况