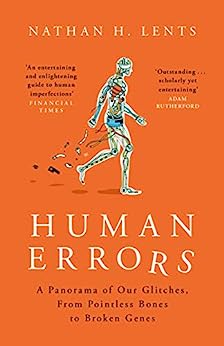 Human Errors: A Panorama of Our Glitches, From Pointless Bones to Broken Genes (English Edition) Kindle电子书

英语版本 Nathan Lents (作者) 格式: Kindle电子书
|
分享
分享 <分享样章>
广告
显示所有 格式和版本 隐藏其他格式和版本
We like to think of ourselves as highly evolved. But if we are evolution's greatest creation, why are we so badly designed? We have retinas that face backward, we must find vitamins and nutrients in our diets that other animals simply make for themselves and millions of us can't reproduce successfully without help from modern science. And that's just the beginning of the story. Biologist Nathan H. Lents takes us on an entertaining and illuminating tour of our four-billion-year-long evolutionary saga, and shows us how each of our flaws tells us a story about our species' history.
阅读更多
Previous page
Next page
›  查看更多商品促销信息

"A funny, fascinating catalog of our collective shortcomings that's tough to put down."
--Discover

"An entertaining and enlightening guide to human imperfections."
--Financial Times

"Nobody will see their body in the same way again."
--Daily Express

"In Human Errors, Nathan Lents explores our biological imperfections with style, wit, and life-affirming insight. You'll finish it with new appreciation for those human failings that, in so many surprising ways, helped shape our remarkable species."
--Deborah Blum, Pulitzer Prize-winning journalist and best-selling author of The Poisoner's Handbook

"A fantastic voyage through the human body"
--The Australian

"Anybody with a slipped disk knows humans are not very intelligently designed, but most of us are unaware of the extent of our imperfections. Nathan Lents fills in the gaps in Human Errors, an insightful and entertaining romp through the myriad ways in which the human body falls short of an engineering ideal--and the often surprising reasons why."
--Ian Tattersall, author of Masters of the Planet and The Strange Case of the Rickety Cossack: and Other Cautionary Tales from Human Evolution

"Anyone who has aged without perfect grace can attest to the laundry list of imperfections so thoroughly and engagingly considered by Nathan Lents in Human Errors. This is the best book I've read on how poorly designed our bodies are. I learned something new on every page."
--Michael Shermer, publisher of Skeptic magazine and New York Times best-selling author of Why People Believe Weird Things and The Believing Brain

"Human Errors is outstanding, scholarly yet entertaining. Perhaps inadvertently, this funny book argues that if there is an intelligent designer, he is comically hopeless."
--Adam Rutherford, author of A Brief History of Everyone Who Ever Lived

NATHAN H. LENTS is a professor of biology at John Jay College at CUNY and is the author of Not So Different: Finding Human Nature in Animals. He has appeared as a scientific expert in national media, including The Today Show, NPR, Access Hollywood, 48 Hours,and Al Jazeera America. --此文字指其他 kindle_edition 版本。

Mark B Gerstein
5.0 颗星，最多 5 颗星 Thoughts on Lents' Human Errors: Fascinating anecdotes on our species' weaknesses
2020年5月12日 - 已在美国亚马逊上发表
已确认购买
I read Nathan Lents' book Human Errors with great interest. This book goes over a variety of physiological and molecular errors in humans that are somewhat paradoxical: they make us, in a sense, significantly more vulnerable than our immediate animal cousins. In particular, writing this review from the vantage point of mid-2020, I found it fascinating that this book was published in 2018 and cautions us on how vulnerable the human species is to global pandemic.

The book begins by describing examples of physiological oddities, such as our prevalence of knee injuries (i.e., ACL) and our upside-down sinus drainage patterns, which to some degree were caused by our recently upright posture. Next, the book delves into molecular defects, looking at the large amount of supposedly junk DNA and the many pseudogenes in our genome. Lents relates the pseudogenes to vitamin deficiencies such as the pseudogene for the GULO enzyme being associated with vitamin C deficiency. Lents then talks about autoimmune diseases, such as Graves disease and Myasthenia gravis, that we are much more prone to than our immediate animal relatives. The book culminates with a focus on the human brain and how it, too, sometimes suffers in comparison to cognitive set-ups elsewhere in the animal kingdom. For instance, our flicker-fusion threshold is considerably lower than that of dogs and birds, meaning that we are less able to resolve things moving quickly. In addition, we tend to be easily overwhelmed by large amounts of data, despite our belief that we can reason with "big data" well.

Overall, the book is a good read. I have some small quibbles on the discussion of junk DNA, which I think is a bit exaggerated. I believe that much of this DNA does have various uses, albeit somewhat indirect. Nevertheless, Lents' illustration of how evolution doesn't always lead to the optimal endpoint is compelling.
阅读更多
5 个人发现此评论有用

Timothy Haugh
5.0 颗星，最多 5 颗星 Excellent Science for Anyone
2020年6月12日 - 已在美国亚马逊上发表
已确认购买
With Human Errors, Professor Lents has written a user-friendly guide to how natural selection has led to some of the oddities and defects of human physiology. Despite the great success of our species, the human animal has a number of challenges that have to be overcome. The rise of these challenges can be explained through the many changes our bodies have gone through over many millions of years. Some of these changes are from developments that couldn’t be undone when physical structures change (the poor structure of the retina, the insufficiency of the ACL). Some are the results of things that were once positive for us that have since become negative (the gene that causes sickle cell also protects us from malaria). Some are things that were negative but initially compensated for (losing the ability to produce our own vitamin C during a period where humans were primarily living in tropical climates with plenty of citrus fruit). And this is only a brief summary of a handful of Lents’ many excellent examples.

It’s easy to go on for a long while about this well-done book. It is easy for anyone to understand even without a background in biology. Also, though clearly based on Darwin, Professor Lents wisely stays away from discussions of controversy. He presents his examples and, apart from a couple side comments about poor design that will rile the intelligent design crowd, he sticks to the science. This makes for a book that comes across as a real “science for the masses” kind of volume rather than as another weak shot in the culture wars. It is well worth reading.
阅读更多
2 个人发现此评论有用

Kindle Customer
5.0 颗星，最多 5 颗星 Not just minor flaws .... er ...... features
2019年1月21日 - 已在美国亚马逊上发表
已确认购买
The author stretches across a large spectrum of human traits and flaws in evolution's "best efforts" incremental approach. Ranging from "why do young women prefer men who take risks" to the outsized number of head colds that human have compared to animals, the book was chuck full of delightful ideas. I hadn't really considered how many tradeoffs there are in evolution (nothing comes without a cost) and how difficult it is for nature to make fundamental (versus incremental) changes. Relatively easy to lose a little hair so we can cool ourselves and run down exhausted prey. No so much to get rid of unneeded bones. If something is just there but not taking up resources, evolution often just leaves it alone, so we carry a lot of baggage from previous forms. We also have mental traits that served us once but are dysfunctional now. I'm going to look for more stuff from this guy. He can write a good thriller, even if it is mostly fact based science. He gets more philosophic as the book progresses .... many interesting possibilities for our species.
阅读更多
22 个人发现此评论有用