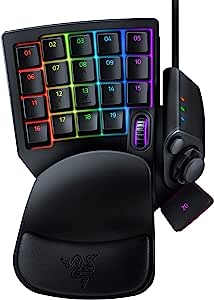 When you’re in the center of the battlefield, it’s crucial to do everything from cast spells to activate skills in a flash. With the Razer Tartarus V2, you can bind commands and skills and activate them instantaneously—all in the palm of your hand.

Rebind buttons, assign macros, save profile configurations to the cloud, and explore advanced capabilities with the ultimate hardware configuration tool.

Ryan L Stone
1.0 颗星，最多 5 颗星 Quality Control Issues + Poor Customer Service = Bad Recipe
2018年3月2日 - 已在美国亚马逊上发表
颜色: Classic Black样式: Tartarus v2 - Mecha Membrane Switches已确认购买
BLUF: D-pad switch broke in less than 2 months and I have to wait 5-6 weeks for a replacement, or pay for a replacement to be sent to me.

I've been a longtime buyer of Razer products, but unfortunately it looks like their quality control is not what it used to be, and it is absolutely apparent that their help desk / customer service is much, much worse. As a longtime user of the Tartarus game pad (all the way back to the Belkin N52), I was super excited to see the Tartarus V2 come out...especially since they brought a true D-pad back to the V2 like the old Nostromo had. I pre-ordered the V2 in NOV17 and received at the end of DEC17. By mid-FEB18, one of the d-pad switches failed (it stopped clicking, felt 'mushy' and would either not work, or be stuck on). I emailed Razer support and waited for over a week. I re-emailed them asking for a status update, and finally received an email back asking to see a movie of the issue and to fill-in a form. I sent the movie and form the same day and continued to wait another week with no response. I sent 2 more emails asking for a status and finally just called their help-line. After an ~45-60 min call with a help desk agent I was told that they would send me a label (~1 week), I would need to ship back my broken product and wait for their staff to inspect it/etc. (~1-2 weeks) and then they would ship me a new one (~1 week). I pushed back and said that I've already been waiting nearly 3 weeks to get this fixed so they offered up the "non standard" replacement approach, but that could only be done by their Tier 2 help desk...who would get back to me within 24-48 hours. Two days later (this morning 3/1/2018), I received an email that said they would send me a new product and a shipping label, but would require that I pay them first ($79.99 +tax) as a 'guarantee', and would hold my funds until they received the broken product back, plus an additional 10-15 business days. At this point, it's looking like it will be ~1.5-2 months since my product broke for me to receive a replacement and I'll have to pay twice for it and *hope* they reimbursement my funds in a timely manner.

I'm not sure what has changed at Razer, but my only other experience with their help desk and replacement process was completely different. I had a switch fail on one of my Black Widow Ultimate keyboards a few years back and was contacted by a rep in less than 2 days, was told they would send me a new keyboard out the same day, and all I had to do was send them a picture of my keyboard cable being cut in half. I was super impressed with how easy it was and had a new keyboard in my hands within days. It's clear *something* has changed, and unfortunately, not in favor of the customer.

Douglas Hillman
5.0 颗星，最多 5 颗星 After the disappointment that was the Orbweaver's thumbpad and thumb button
2018年1月28日 - 已在美国亚马逊上发表
颜色: Classic Black样式: Tartarus v2 - Mecha Membrane Switches已确认购买
After the disappointment that was the Orbweaver's thumbpad and thumb button, the Tartarus v2 is exactly what I've been wanting ever since the release of the first Belkin Nostromo a decade ago. It's really just an n52 with a fourth row of buttons. Razer's mecha-membrane keys have a good feel and aren't too clicky. The Synapse 3.0 software, as of early 2018, is still sorta beta and certainly could be a bit more user friendly and fuller featured, but it does the job it's supposed to do. The RGB features are neither here nor there for me, as my hand covers it when I'm gaming and when I"m not it's mostly out of sight anyways, but there's a fair amount of prebuilt lighting modes and the ability to do some custom stuff, including effects that move across other Razer RGB devices. So that's cool, if that's your thing.
阅读更多
38 个人发现此评论有用

Prophet360
1.0 颗星，最多 5 颗星 If I could I would give 0 stars
2018年12月10日 - 已在美国亚马逊上发表
颜色: Classic Black样式: Tartarus v2 - Mecha Membrane Switches已确认购买
DO NOT BUY THE TARTARUS V2!!! It requires the use of Synapse 3, it is unsupported in 2. Problem is 3 is beta (feels like an alpha) and does not work. No profile import, cannot share profiles, does not switch profiles, cannot detect what is installed, cannot install Chroma apps, does not have any support, the manual is meaningless, and no setup to follow. Maybe the Orbweaver is different, I am not sure but the Tarturus v2 DOES NOT WORK
阅读更多
30 个人发现此评论有用
加入亚马逊Prime，从此免运费
亚马逊Prime会员可享海外购美/英/日/德跨境免邮，全年无限次！更有免费无限次阅读电子书服务
> 立即加入
了解我们
合作信息
帮助中心和购物指南