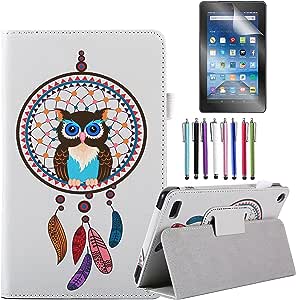 Beckalina
4.0 颗星，最多 5 颗星 Prefer it over the Fintie
2016年12月5日 - 已在美国亚马逊上发表
已确认购买
I just got my 4th Kindle. I've enjoyed my HDX and didn't think I needed a new one yet, but the deal was pretty good and I was running out of storage space from my games. So I got the HD 8". I didn't really need it to be any bigger, as the HDX fit nicely in my purse and held well in my hand. The 8" is about 1" longer and the same width, so that wasn't too bad of a change.

For a case, I have always used the Roocases. Their price was very reasonable and I loved the origami fold. I was really unhappy to find that they don't have a case for the HD 8". I decided I would try the Fintie Folio Case for All-New Amazon Fire HD 8 (6th Generation, 2016 release), Slim Fit Premium Vegan Leather case in the VanGogh pattern. Right away, I found the case to be heavier than Roocases, and more slippery. I can't imagine anyone using a Kindle without a case. They are so slippery (like an iPhone without a case!) Even though the Fintie (which looks just like the MoKo) was a decent price and had the "origami" fold, I found its "leather" case to be too smooth and heavy feeling. It wasn't as easy to hang on to as my old Roocase "leather" cases that have texture to them.

So, I went back to search for something like my Roocase and this looked like it. It just came and I will say what I do like:
-Price and that I could get the blue one with Prime (paid a bit more, but wanted it sooner)
-Lighter and less bulky than the Fintie, and a bit more of a grain, though not as much grain as the Roocase
- It has the stylus loop, which I want. I prefer an extra long stylus, but the one that comes with this is OK for a shorter one
-It actually has a better frame around the screen, with more cut out at the bottom and top and sides, where you need to touch to pull up the controls. I'm still getting used to the control being top & bottom, than on the right side on my HDX. Compared to the Fintie, this frame gives you more access to the control spots on the Kindle without touching off something in a game.
-A black frame. I was actually grateful that the Fintie Starry Night Van Gogh case also had a black inner frame around the Kindle. I see some with designs have the frame in the design, too. I would not want a design competing with the screen. A black/dark solid frame is best.
-The textured/suede-like inner liner. The liner in the Fintie is a smoother suede.

Issues:
- Not a big deal, but the photo looks more like a teal, though it is called Navy Blue. It IS a dark navy blue
- To start, it barely closes. I pulled the Kindle in as tight as I could, using the velcro tab that goes under the Kindle. It still barely folds over. It is starting to get better bit of stretching. It I have too much trouble with this, I will have to contact Amazon about it.
The magnetic cover does work to put it to sleep and turn it on, though maybe not 100% consistently. All the buttons and camera openings are properly exposed.
-I'm not crazy about the tab to hold it in an easel position. That is why I loved the Roocase origami that folded nicely into an easel, with out having to hook it into a rather stiff tab.

TIP to all magnetic closing/auto sleep case users. Don't ever go to a hotel and carry your room key around on top of our near your Kindle. It will de-magnitize your key almost every time. Don't even put it very close to the key in a purse or bag. My credit cards in my wallet make it, but hotel room keys don't!

Jennifer314
5.0 颗星，最多 5 颗星 Function and Fashion
2017年3月28日 - 已在美国亚马逊上发表
已确认购买
I bought it to protect my Fire, not knowing it was going to give my Fire a total makeover. It's so much easier to use now. I should have bought it sooner. Great quality and design. Just make sure you check which generation your Fire8 is.This fits the newer generation that came out in 2016. I had an older one, (and broke it from not having a protective case). The newer generation isn't as thin. The case would still fit the old ones, it would just have a little extra wiggle room.
阅读更多
18 个人发现此评论有用

Steff D
5.0 颗星，最多 5 颗星 Love!
2016年12月3日 - 已在美国亚马逊上发表
已确认购买
I absolutely love this. It looks great, very well made & all the port cutouts are where they should be. The cover that folds into a stand is perfect for hands free reading (or when your hands are covered in flour & you're reading a recipe!). A quick wipe down cleans the exterior of the case, too, even juice didn't leave a stain (although I did wipe it up within seconds). I can see this lasting quite a long time.
阅读更多
20 个人发现此评论有用

Leslie Groesbeck
4.0 颗星，最多 5 颗星 Perfect for most of us!!
2017年3月21日 - 已在美国亚马逊上发表
已确认购买
Perfect lower cost case!! Allows full use of all the newest Kindle functions! I'll consider this a "home case", as I'm still learning the ins and outs of my new Kindle. Not sure if i'd trust this one to keep it "worry-free" safe in my hands around the town. Comes with a not easy to install, screen protector. I managed quite the collection of unworkable air bubbles, which is the only reason for my 4 stars, instead of 5!
阅读更多
5 个人发现此评论有用
加入亚马逊Prime，从此免运费
亚马逊Prime会员可享海外购美/英/日/德跨境免邮，全年无限次！更有免费无限次阅读电子书服务
> 立即加入
了解我们
合作信息
帮助中心和购物指南