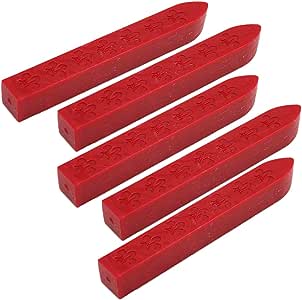 Keiron Black
4.0 颗星，最多 5 颗星 For those who know what they're doing
2019年8月11日 - 已在美国亚马逊上发表
已确认购买
I assure you most of the negative reviews for this product are from people who have no idea what they are doing. It is not meant to have a wick nor is it meant to go in a glue gun. Sure you can cut it but its easier to just hold the stick against your hot spoon. They arent meant to be shimmery either, they are plain and more traditional. And while yes it does make the stamp stick to the paper, so do alot of professional name brand waxes, one way to avoid or lessen this is to moisten the stamp before hand either with a damp sponge or by licking it.

Now I will admit it is not the colour I was hoping for but that was expected, I was hoping for a deep green, it is a bright green. And after it is on the paper it feel more like hot glue than wax but it did its job and it did it well.
In my photo you can see where I had to peel some mistakes off the page and ot took alot of the page with it so I highly suggest only sealing that which contains your letter/paper as opposed to turning your letter/paper into the envelope itself. Overall
Pros:
·Bold colour
·Melts easily
·Seal likely won't break when being handled

Cons:
·Difficult for beginners or those who don't understand wax seals well
·Rips paper when seal is broken
·More of a glue than a wax
·Stamp can be difficult to remove after

Kathy
4.0 颗星，最多 5 颗星 Good product for the cost
2019年2月3日 - 已在美国亚马逊上发表
已确认购买
I used these to make wax seals for Hogwarts letters. They're not as great of quality as some of the others out there, and they don't have the shimmery look like some, but it's a great price for the money you're spending.
The only complaint I have is when the wax heats, it gets really runny so it spreads to much. I find pouring it slowly so it cools a little bit works nicely.
阅读更多
2 个人发现此评论有用

David W
4.0 颗星，最多 5 颗星 Non-wick wax sticks have advantages.
2020年1月19日 - 已在美国亚马逊上发表
已确认购买
I like this type of stick wax best..no wick. W/O a wick you won't chance black wax dripping into your nicely colored seal. Also easier to work with than a wick one when turning/melting. Know how to "stick wax" before buying a bunch of these. Also these sticks aren't "real" red. If you will be using for Christmas, don't recommend these. Non-wick sticks are much easier to cut for melting in a pot.
阅读更多

Jones family
1.0 颗星，最多 5 颗星 Wax caught on fire each time!
2019年10月13日 - 已在美国亚马逊上发表
颜色: 中国红已确认购买
Ordered these to stamp onto an invitation but the wax keeps catching on fire. I’ve never had wax do that and I’ve used other waxes the same way before. Not only was it dangerous and catching the invitation on fire, but as it was burning the wax turned black. Also, I’m used to waxes with a wick.
阅读更多
1 个人发现此评论有用

Alicia Olivas
5.0 颗星，最多 5 颗星 Works greats
2019年12月5日 - 已在美国亚马逊上发表
已确认购买
I brought this was because I'm doing a Harry Potter-themed gift for my nephew as he just finished reading the series and I wanted to do the Hogwarts seal in purple as described in the books.
Once it came I tested out the stamp and the wax and it came out perfect. It melts well, and it is flexible so it won't snap in half when bent unless you really work it. In the picture, it's not too clear but the wax is shiny.
Having never used wax seals I was worried the wax would harden before I could place the stamp, this, however, was not the case and I plan on buying more.
阅读更多