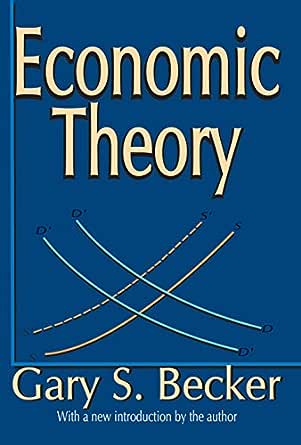 Ed H.
5.0 颗星，最多 5 颗星 Economic Theory by Professor Gary Becker
2013年10月1日 - 已在美国亚马逊上发表
已确认购买
The author of this text is Nobel Laureate, Dr. Gary Becker of the University of Chicago. Most texts in economics focus either on macroeconomics, the study of the economy as a whole, or microeconomics, the study of economics at the level of the individual consumer or decision maker. Dr. Becker eschews that approach because he believes there is only one kind of economic theory, not separate theories for micro problems, theories for macro problems, etc. Economic analysis is the study of behavior in the market place, the behavior traditionally studied by other social scientists than economists. The book presents a series of lectures that anyone with a solid grounding in basic economics can use to apply to the study of the behavior of individuals in the world at large. It is highly recommended for both students, scholars, and practitioners of the art and science of economics.
阅读更多
3 个人发现此评论有用

fp
5.0 颗星，最多 5 颗星 Becker
2013年1月13日 - 已在美国亚马逊上发表
已确认购买
This is an awesome textbook, teaches price theory superbly with the very distinct touch of the Chicago School with its emphasis on intuition.
阅读更多
3 个人发现此评论有用

Jonathan
5.0 颗星，最多 5 颗星 Worth every marginal penny!
2014年5月20日 - 已在美国亚马逊上发表
This is a practical, concise, tightly written compendium/summary of microeconomic theory. Closely read, it makes you challenge some basic assumptions. The mathematics is not too hard, but concepts are challenging. This is a great second book once you have done microeconomics 101. Read this and you will gain a much deeper understanding.
More than that, you will appreciate how a really sharp guy thinks.