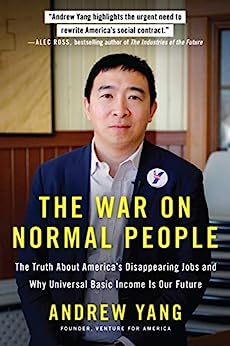 The War on Normal People: The Truth About America's Disappearing Jobs and Why Universal Basic Income Is Our Future (English Edition) Kindle电子书

英语版本 Andrew Yang (作者) 格式: Kindle电子书
|
分享
分享 <分享样章>
广告
显示所有 格式和版本 隐藏其他格式和版本
The New York Times bestseller from CNN Political Commentator and 2020 former Democratic presidential candidate Andrew Yang, this thought-provoking and prescient call-to-action outlines the urgent steps America must take, including Universal Basic Income (UBI), to stabilize our economy amid rapid technological change and automation.
The shift toward automation is about to create a tsunami of unemployment. Not in the distant future--now. One recent estimate predicts 45 million American workers will lose their jobs within the next twelve years--jobs that won't be replaced. In a future marked by restlessness and chronic unemployment, what will happen to American society?

In The War on Normal People, Andrew Yang paints a dire portrait of the American economy. Rapidly advancing technologies like artificial intelligence, robotics and automation software are making millions of Americans' livelihoods irrelevant. The consequences of these trends are already being felt across our communities in the form of political unrest, drug use, and other social ills. The future looks dire-but is it unavoidable?

In The War on Normal People, Yang imagines a different future--one in which having a job is distinct from the capacity to prosper and seek fulfillment. At this vision's core is Universal Basic Income, the concept of providing all citizens with a guaranteed income-and one that is rapidly gaining popularity among forward-thinking politicians and economists. Yang proposes that UBI is an essential step toward a new, more durable kind of economy, one he calls "human capitalism."
阅读更多
›  查看更多商品促销信息

"I found [The War on Normal People] fascinating and troubling."--Major Garrett, host of CBS News' "The Takeout" "A sobering portrait of a crumbling polity . . . [and] a provocative work of social criticism."--Kirkus Reviews "America desperately needs a wake-up call. This book will open your eyes to the ongoing effects of automation. Fortunately, aside from knowing full well the many challenges we face, Andrew Yang has a firm grasp of the solutions, most especially our need for Universal Basic Income. Read this book and hear the urgent call for abundance over scarcity, and humanity over abject madness. The clock is ticking."--Scott Santens, Director, U.S. Basic Income Guarantee Network "This book is a must read. Andrew Yang is tackling one of the biggest challenges facing our country the way only an entrepreneur can, but unlike most, he sees the big picture. Making money is good for you-but building a strong society and strong people is good for all of us. The topics Andrew addresses in this book aren't about some dystopian future way down the road. These things are happening today, and every entrepreneur should read this book to understand the challenges of the next decade."--Daymond John, star of ABC's Shark Tank, bestselling author of The Power of Broke, and founder of FUBU "Andrew Yang writes with passion and conviction, offering astute analysis--as well as a hopeful solution--for the looming challenge that may well define the coming decades: How can we ensure broad-based prosperity in a future where labor-displacing technology becomes vastly more powerful?"--Martin Ford, New York Times bestselling author of Rise of the Robots "In this powerful book, Andrew Yang highlights the urgent need to rewrite America's social contract. In a call to arms that comes from both head and heart, Yang has made an important contribution to the debate about where America is headed and what we need to do about it."--Alec Ross, New York Times bestselling author of The Industries of the Future "Andrew Yang is one of those rare visionaries who puts dreams into action. The War on Normal People is both a clear-eyed look at the depths of our social and economic problems and an innovative roadmap toward a better future."--Arianna Huffington, Founder and CEO of Thrive Global --此文字指其他 kindle_edition 版本。

Andrew Yang is the founder of Venture for America, a major non-profit that places top college graduates in start-ups for two years in emerging U.S. cities to generate job growth and train the next generation of entrepreneurs. Yang has been the CEO, co-founder or executive at a number of technology and education companies. Yang was named a Presidential Ambassador of Global Entrepreneurship and a Champion of Change by the White House and one of Fast Company's "100 Most Creative People in Business." He was also named to the National Advisory Council for Innovation and Entrepreneurship of the Department of Commerce. A major documentary with an Oscar-winning director, Generation Startup, featuring Yang and Venture for America, was released in Fall 2016 and is available on Netflix and other streaming platforms. He is a graduate of Columbia Law, where he was an Editor of the Law Review, James Kent Scholar and winner of the Class of 1912 Prize, and Brown University where he graduated with degrees in Economics and Political Science. --此文字指其他 kindle_edition 版本。

Andrew Yang completely nails what has caused many of the problems in the US. His simple description of the human effects from automation, and his major policy recommendations to fix them are both a strong reality check and extremely inspirational.

Whether you're Republican or Democrat, Andrew clearly proves that automation is real and having a negative effect on our society. Most importantly, instead of just identifying the problems, he suggests bold (but still realistic) policy solutions that can prepare us for this new reality.

It's a quick read, easy to understand and Andrew throws in a few good laughs along the way.

Simply put - This is a must-read for all Americans.
阅读更多
371 个人发现此评论有用

There were 2 things that stood out to me about his book, 1) the growing disillusionment of the young male population, and 2) what it means to be normal and the bubble many elites live in.

Communities of angry young men is nothing new, but in the last 10 years they have had a explosion of growth as people retreat from social interactions and just give up with a nihilistic air to them (groups like MGTOW or TheRedPill are great examples). Yang addresses the man child that sees no future when he points to what many online communities of angry men preach, more women graduate from college, it's hard to climb up unless you were born into it, let's just give up, and etc etc. He further notes how this damages our social fabric, from the increasing drug usage to decreasing marriage rates to decreasing civic engagement. The disillusionment as mentioned is talked about, but recognizing the desire to retreat into video games was a relate-able feeling that other leaders have not talked about.

But despite the growing problem within people outside of the intellectual class, we as a country live in a divided world such that while only ~30% of Americans have bachelors degrees, if we have a Bachelors degree ourselves, chances are we only know people with bachelors degrees as well. He further notes that the elites in our country that went to MIT, Harvard, Stanford, and etc go to work in the same places and the same companies and hang out with each other further segmenting themselves off from society. This is self-evident in the last election where many liberal Americans were caught blindsided by the Trump win that tapped into a large vein of discontentment.

Yang clearly illustrates and trends and diagnoses the problems, his solution he puts forward will stand debate over the coming years as I suspect it's not the last we hear of it. What is clear is that the issues he outlines are undeniable and need to be addressed with new ideas as opposed to more of the same.
阅读更多
317 个人发现此评论有用

H Seattle
5.0 颗星，最多 5 颗星 I’ve made my pick for 2020
2019年1月14日 - 已在美国亚马逊上发表
已确认购买
I heard the freakonomics episode and wanted to learn more. So I bought the book. I would like to get Andrew out to Seattle to “kick his tires” some more, but so far I am very impressed with him and the no nonsense clarity of his thinking. First, it is clear he has been thinking about this for a while. But beyond that, he doesn’t just have the start of a theory of change. He has a coherent and comprehensive vision which he presents without grandiosity or fluff. I only wish he were running for president as an independent.
阅读更多
166 个人发现此评论有用

Full Review:
Some time ago, in an earlier review, I voiced my objections to Hans Rosling's hugely successful "Factfulness". In it I argued that while Rossling's narrative presents a very positive and enlightening view of global development, it is failing to take into account not only the pernicious effects of said advancements on the environment, but more importantly, it is committing the sin of shortsightedness regarding the hard challenges that lie ahead in the very near future, such as automation and Artificial Intelligence. Sure, Hans, things are much better than we think, but for how long given where we're heading?

This book is the antidote. It gets it. Andrew Yang gets it. Thus, this marks the first time I am genuinely impressed by a presidential candidate on the issue of jobs, the economy, and social order.

Yang has "walked the walk" and it shows. His arguments are clear and backed by plenty of hard evidence and observations collected from his cross-country travels and the time spent getting startups off the ground with Venture For America. It's time to come to terms with the fact that the vehicle that got us this far is now broken and in dire need of repair, and I've yet to hear a more compelling diagnosis than the one found herein.

For instance, on the argument of dealing with a looming crisis due to automation, skeptics and detractors like to point out that new jobs will appear where old ones are automated away, providing people with better and more dignified jobs. On this, Yang writes:
"The test is not “Will there be new jobs we haven’t predicted yet that appear?” Of course there will be. The real test is “Will there be millions of new jobs for middle-aged people with low skills and levels of education near the places they currently reside?” Watching the news these days I get the sense that these anxieties are hitting the middle class hard, and driving a very real wedge between these very disparate versions of America.

On the sacred creed of meritocracy, he writes
"The logic of the meritocracy is leading us to ruin, because we are collectively primed to ignore the voices of the millions getting pushed into economic distress by the grinding wheels of automation and innovation. We figure they’re complaining or suffering because they’re losers."

and...
"We say success in America is about hard work and character. It’s not really. Most of success today is about how good you are at certain tests and what kind of family background you have, with some exceptions sprinkled in to try to make it all seem fair."
Spot on.

Consider reading this in conjunction with "Utopia for Realists", which is the perfect companion to Yang's arguments. And even if you disagree with what you'll find here, at least you'd be taking part in a very important conversation regarding the future of this country.
阅读更多
126 个人发现此评论有用