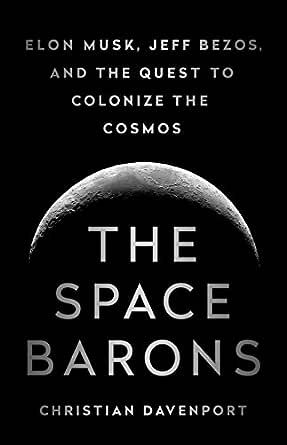 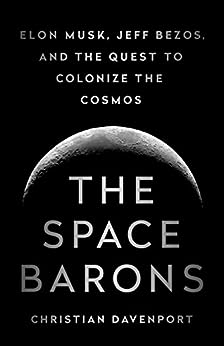 "Unlike the space race of the 1950s and 1960s, the new space race is not a competition between superpowers-it is a competition among billionaires with egos and ambitions that match their fortunes. The Space Barons provides a superb behind-the-scenes look that chronicles the new space race from its beginning some two decades ago to the headlines of today. This book is a must-read for everyone who fell in love with space as a kid and still longs to reach for the heavens."--Todd Harrison, Center for Strategic and International Studies

"A must-read. A compelling account of how today's self-made tycoons are driven to change our world and our relationship with outer space. This is distinctly an American story, nowhere but America could these Space Barons rise, thrive, and succeed. Follow their journey into the future."--Dr. Mark Albrecht, executive secretary of the National Space Council under President George H. W. Bush and author of Falling Back to Earth: A First Hand Account of the Great Space Race and the End of the Cold War

"Readers will thrill at this lucid, detailed, and admiring account of wealthy space buffs who are spending their own money, making headlines, producing genuine technical advances, and resurrecting the yearning to explore the cosmos."--Kirkus, Starred Review

"Starting with a blank canvas, Christian Davenport has painted a comprehensive portrait of some of the most influential leaders in commercial space, and indeed of the industry itself. Well-researched and entertaining, The Space Barons gives both a rich texture to the beginnings and a tantalizing outline of the future of commercial human space travel."--Michael Lopez-Alegria, former NASA astronaut, past president of the Commercial Space Flight Federation, and principal, MLA Space, LLC --此文字指其他 kindle_edition 版本。

Christian Davenport is a staff writer at the Washington Post covering the space and defense industries for the financial desk. He joined the Post in 2000, and has written about the DC-area sniper shootings, the Abu Ghraib prison scandal, and the burial problems at Arlington National Cemetery. He is a recipient of the Peabody award for his work on veterans with Traumatic Brain Injury and has been on reporting teams that were finalists for the Pulitzer Prize three times. Before joining the financial staff, Davenport was an editor on the Metro desk, overseeing coverage of local government and politics. He has also worked at Newsday, Philadelphia Inquirer, and Austin American-Statesman. As a frequent radio and television commentator, he has appeared on MSNBC, CNN, PBS NewsHour, and several NPR shows, including All Things Considered and Diane Rehm. --此文字指其他 kindle_edition 版本。

Mal Warwick
5.0 颗星，最多 5 颗星 An outstanding survey packed with details about the personal lives of four extraordinary men
2018年5月23日 - 已在美国亚马逊上发表
已确认购买
Not long ago, I reviewed Elon Musk: Tesla, SpaceX, and the Quest for a Fantastic Future by Ashlee Vance, and The Everything Store: Jeff Bezos and the Age of Amazon by Brad Stone. Both books are well done. They're the product of professional journalists who are good at what they do. But neither book comes close to Christian Davenport's superb new book, The Space Barons: Elon Musk, Jeff Bezos, and the Quest to Colonize the Cosmos, in offering insight into the personality of these two extraordinary men who are the central characters in his book.

The personal details about the lives of Musk and Bezos are abundant and highly revealing. For example, here is Davenport with an anecdote from the early life of Elon Musk: "He had such concentration that as a toddler in Montessori school, his teachers would have to pick him up—in his chair—to keep him moving from task to task." And this about Bezos: "His girlfriend from high school had once told an interviewer that Bezos had founded Amazon in order to make enough money to start a space company." Davenport notes that Bezos "conceded that there 'is some truth to that.'"

Davenport's subject in The Space Barons is the pivotal role of four billionaires and the private space companies they've started in the emergence of the rejuvenated space industry. All four men envision lowering the cost of space travel and making it more accessible—and Davenport makes clear that they have taken great strides toward this goal. Although Musk and Bezos occupy center stage, Paul Allen (cofounder of Microsoft) and Richard Branson (the Virgin companies) also play large roles. Davenport tells the tale with great assurance in prose that is always lively and engaging. He interviewed all four of his subjects and many of their associates (and critics) as well. This is the remarkable story of four self-made billionaires whose great wealth and passion allowed them to pioneer space technology that NASA had grown too old and bureaucratic to develop itself. If humankind ever succeeds in populating the solar system, historians may conclude that the determination and resources of these men were largely responsible.

Musk, Bezos, Allen, and Branson are very different from one another, though each is undoubtedly brilliant in his own way, and at least three of the four are science fiction fans. Musk is the youngest of the lot—he was born in 1971—and by far the brashest and most impulsive. His company, SpaceX, has made the biggest splash to date and has generated by far the most revenue, but Musk has a bad habit of setting impossible deadlines for what he envisions as the principal goal of his efforts: building a city of one million people on Mars. He has also gotten his way at times only by suing NASA and the Pentagon. By contrast, Bezos and his company, Blue Origin, have been the tortoise to SpaceX's hare ("Slow is smooth and smooth is fast" as compared to "Head down. Plow through the line.") Bezos' highly secretive company has consistently been wary of publicizing its achievements.

Both Musk and Bezos (born in 1964) envision traveling into space on their own rockets. Allen and Branson, who are older—born in 1953 and 1950, respectively—do not contemplate the trip to Mars that Musk hopes to take. Allen's part in the emergence of the new industry was for a time very limited by his fear that lives might be lost in the process; later, however, he staked out a unique project of his own: building a spaceplane larger than any airplane ever built. Branson, who is even more flamboyant than Musk, is all showman and marketer. His contribution was initially to promote the work of aircraft designer Burt Rutan, assuming the controlling interest in Rutan's company in place of Allen and only later getting into the business of building rockets, as Musk and Bezos have been doing for nearly two decades.

Elon Musk is single-mindedly focused on building a large city on Mars. Jeff Bezos does not share this focus. "'There's all kinds of interesting stuff you can do around the solar system,'" he told Davenport, "'but the thing that's going to move the needle for humanity the most is mining near-Earth objects and building manufacturing infrastructure in place . . . That's the big thing.'" Given the obstacles to living on the surface of Mars that I have learned through other reading, I tend to agree with Bezos.

Christian Davenport is a reporter for the Washington Post, which is owned by Jeff Bezos. He acknowledges that it is "somewhat awkward writing a book about someone who could have you fired." However, his editor, Marty Baron, "has made it clear that [the Post] covers Jeff's companies as it would any other" and encouraged him to write the book. The Space Barons is Davenport's second.
阅读更多
12 个人发现此评论有用

Espen Urkedal
5.0 颗星，最多 5 颗星 Fascinating book with lots of interesting stories
2018年3月27日 - 已在美国亚马逊上发表
已确认购买
The book is written as a chronological story, jumping between the 3 new space companies. Although I see myself as fairly knowledgeable in the history of these companies, there were lots of nuggets that were new to me. It is also well written in a way that also made the stories I already knew fascinating to revisit.
阅读更多
11 个人发现此评论有用

Alastair Browne
5.0 颗星，最多 5 颗星 Private Industry Moves into the Space Launch Business
2018年4月27日 - 已在美国亚马逊上发表
已确认购买
As the U.S. government goes on a wild goose chase for its next goal in space, NASA going around in circles as it complies, the private space industry is now moving in, and not a moment too soon. Since its last voyage to the Moon (Apollo 17) back in 1972, the U.S. and NASA has retreated to Earth orbit, with Skylab, Apollo-Soyuz, and the space shuttle. The shuttle was a noble experiment meant to cut costs and fly to space constantly, but alas, it turned out to be the most expensive and required constant maintenance after each flight. It turned out that in the end, a flight would cost $1.5 billion, and in its run, two ships were destroyed in flight, killing 14 astronauts.
Enter the private space industries, that builds rockets from scratch, launches them at one tenth the cost, so far, and reuses the first stage. Virgin Galactic, being in the tourist business, launches their ships from an airplane at 35,000 feet all the way up to the beginning of suborbital space.
This book focuses on three industrialists: Elon Musk, of SpaceX (and Tesla), Jeff Bezos of Blue Origin, and Richard Branson of Virgin Galactic. Other companies are mentioned, that started but were unsuccessful, but these three are the top space barons, for now.
As stated, Richard Branson is focusing on space tourism with Virgin Galactic, but the two competitors are Elon Musk and Jeff Bezos, and they are at it like dogs. SpaceX has mostly dominated the headlines, with its Dragon capsule supplying the International Space Station (ISS) and the first stage of the Falcon 9 returning to Earth to be reused, rather than be dumped into the ocean. They've also made the news with the Falcon Heavy, the new Heavy Lift Launch Vehicle, with the hope of eventually reaching Mars.
Blue Origin is the quieter company, but they are competing closely with Space X on its own space taxi along with their reusable first stage rockets.
These alone make Musk and Bezos fiercely compete and make the race interesting. There are even anecdotes on them being on stage with other executives, but these two avoiding each other like the plague. It's that fierce.
Fortunately, it's good for the rest of humanity because the space launch business is finally being made available to the general public, with ever decreasing launch costs, and this alone will finally get the U.S. and all of humanity back into space, the next frontier, this time without an end.
As for NASA, my recommendation for them is to completely get out of the launch business and save taxpayer money by leasing rockets from private companies at a fraction of the cost.
After a 40 year delay, The Space Barons will help take humanity to the stars.
Read the book. It's exciting and filled with tidbits of little known facts, some even amusing, having little to do with space itself (one even involving a gambling casino in Las Vegas), but you see the goings on in the space business.
阅读更多
5 个人发现此评论有用
加入亚马逊Prime，从此免运费
亚马逊Prime会员可享海外购美/英/日/德跨境免邮，全年无限次！更有免费无限次阅读电子书服务
> 立即加入
了解我们
合作信息
帮助中心和购物指南