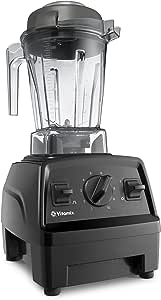 Mike B.
5.0 颗星，最多 5 颗星 Perfect for college students
2018年1月31日 - 已在美国亚马逊上发表
颜色: 黑色已确认购买
I was on the fence about spending this much on a blender, but I am very happy I did.The main reason for my purchase was because I wanted to make healthy smoothies/meal replacements. I had the nutri ninja bullet and it was great for protein shakes, but could not chop up ice, veggies/fruits that well and I hated holding it down to blend.

I am in college and I live alone so getting the smaller & cheaper blender made sense to me. It does the same blending that all the other models can do, but without the fancy extras such as touch screen and pre-programmed setting.
This blender was a great upgrade for me and because of how much it can do I will be taking full advantage of it.

Conclusion: If you are looking for a blender that can make small servings for only yourself or for you and a friend then look no further. While this blender is not cheap, it is the best blender you can get for this price.
-Also, I have had my Amazon account for several years and I have only written 1 or 2 reviews. My reason for this review was because I spent hours on hours looking at reviews on different blenders and could not make up my mind. I have had a wonderful experience with this product so far and I hope my review can help make someones decision a little easier for them.
HAPPY BLENDING!
阅读更多
491 个人发现此评论有用

dbaum
3.0 颗星，最多 5 颗星 Not a bad blender, just not a great on either.
2018年5月26日 - 已在美国亚马逊上发表
颜色: 黑色已确认购买
3.5 stars. Always wanted a Vitamix, but it is hard to pay the price it costs. I was thrilled to find this one at a reasonable price (still high for a blender). I had already worn out the Ninja Professional making smoothies in just a year and figured this was worth the investment. Is it powerful? More powerful than my Ninja, yet I still find pieces that were not completely ground out. Not even half as loud as the Ninja. The cons would have to be that this is a low end Vitamix, and I have to keep my hands on it to brace it down as it is blending. Otherwise it would move all over the place. I have to stop a couple times during blending to stir back in all the parts of the smoothie that have been pushed to the side and will not blend. It is strong, but I expected everything to be ground out smooth and many times they are not. Overall not a bad blender, I just wish I would have gone ahead and spent the extra money to buy the higher end blender.
阅读更多
175 个人发现此评论有用

Stella Bella
1.0 颗星，最多 5 颗星 So disappointing. Who are all the 5 stars coming from?!
2018年7月30日 - 已在美国亚马逊上发表
颜色: 黑色已确认购买
This blender is incredibly disappointing. I can't make a smoothie without needing a lot of liquid. It's also incredibly loud. My boyfriend has a 5200 that's way older than my E310 and I couldn't believe how quiet it is. How is my unit newer and louder?! He can also make smoothies, nut cheeses, and nut butters without having to use liquid or as much liquid as me. New products should be improvements on older products. I want to return it and buy an older model.
阅读更多
141 个人发现此评论有用

Bobby
5.0 颗星，最多 5 颗星 Dope blender
2017年11月22日 - 已在美国亚马逊上发表
颜色: 黑色已确认购买
Dope blender. I pureed soup to a velvety texture in 30 seconds. Then made a lemon slushy. Super easy to clean, assemble. Fits under kitchen cabinet. I didn't think it was too loud. The container shape is still narrow, even though its shorter, so some of the problems that others have had with the short fat containers are avoided. I'm still figuring out how to use the pulse button, or why its even there. I highly recommend this blender, and unlike other reviewers here I was not provided with a free product. Just a dude who likes his new blender.
阅读更多
311 个人发现此评论有用

Why the three stars? The design is really poor and makes using it a frustrating experience.

- The canister doesn't lock into place, so you have to hold it the entire time it's blending, otherwise the power of the blender throws it off. There are four pads that catch it, but there's plenty of wiggle room, and if you let the force of the motor move it, it makes a terrible grating sound, like the motor isn't attached or aligned properly anymore. Really scarey.

- The sides are terrible for scraping things out. When I make any sort of liquid thing that doesn't just all come out on it's own, like a dressing, there's maybe 1/4 cup of stuff left on the walls and bottom of the machine. The square-ish sides mean a normal spatula doesn't work to get the stuff out of the corners. I bought one of Vitamix's skinny spatulas that's supposed to fit in the corners, but you basically have to go on each side of the corner, so 8 times. Super slow and frustating. Then there's the stuff at the bottom of the blade, so you have to rotate the blades out of the way to get the stuff underneath.

- The space at the bottom of the blade means your food will not be uniformly blended. The tamper works to get stuff above the blades down, but I've fished out unblended food from below the blades.

- Stuff leaks out the top. I returned my first Vitamix because when I did the cleaning water test with the canister half-full, water leaked out the top from the sides. I got it exchanged and now the lid locks better, but the middle part still oozes liquid, even at half capacity.

Fundamentally, it does what it needs to do - blend food - but the design makes the experience of using it frustrating rather than delightful, which is pretty unacceptable at this price point. I would imagine there are other high-powered blenders that have solved these problems and are maybe even less expensive.
阅读更多
68 个人发现此评论有用
加入亚马逊Prime，从此免运费
亚马逊Prime会员可享海外购美/英/日/德跨境免邮，全年无限次！更有免费无限次阅读电子书服务
> 立即加入