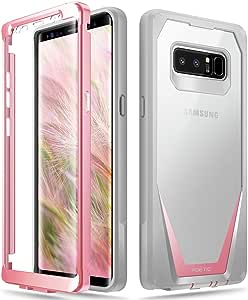 Karen S
4.0 颗星，最多 5 颗星 Amazing durability saved my vacation photos.
2018年8月23日 - 已在美国亚马逊上发表
颜色: 粉色/灰色已确认购买
If I could give this case 10 stars for durability I would. Imagine being on the vacation of a lifetime on the last day with over 1,000 pictures on your phone. Then while standing on the walkway in the picture above I dropped my phone over 20 feet onto a large rock in the water below. Luckily it was low tide so the water wasn't as deep as it could have been. As my boyfriend climbs down to get it onlookers are betting if it will be ruined or not. The answer is not a scratch on the phone nor a cracked screen. Only a scratch on the corner of the case. The phone was laying in water on the rock for 15 minutes and the only problem with the phone was they $20 stylus pen had popped out and floated away. AMAZING THe only issue I have is the screen cover is not very user friendly especially on the edges. But thanks to this cover I'm not buying a new phone and all of my vacation photos were safe.
阅读更多

V.Raj
3.0 颗星，最多 5 颗星 A Solid 'Meh' - but the company is pretty great
2017年11月10日 - 已在美国亚马逊上发表
颜色: 粉色/灰色已确认购买
For the money, it's worth trying it out, but I've noticed a few major flaws in this case.
The first and biggest flaw is the built-in screen protector. It is made of plastic that is somehow both too flimsy and too thick. It severely altered my experience with my phone and made it much less responsive. It was also a fingerprint magnet and no matter what I did, it ended up looking greasy and gross.
The second major flaw again relates to appearance and fingerprints, but this time, the problem is the back of the case. Clear polycarbonate seems to be a mistake a lot of companies are making and I haven't seen it go well so far, so this isn't necessarily Poetic's fault. However, it not only attracts fingerprints but because both sides are clear, I can almost guarantee that if you are attempting to put this on in a lived-in home, rather than a purely dust-free environment, you will experience anguish in the process. The tiniest pieces of dust and/or dirt find their way onto the inside of the clear back and you may not even notice them until you've finished putting the case on. Because this is the kind of case where you first place the front on and then the back, you will likely go through this multiple times before finally giving up. (I really hope that one speck of dust isn't hurting my phone, because it's there to stay until I replace this case.)
Finally (I think), the front piece is very flimsy. When handled, the screen protector easily begins to pop off (for better or worse) and the remaining frame is very weak. While intended to work with the built-in screen protector, they should either have made it in such a way that the screen protector was higher quality and less likely to pop off or that the frame could support itself.
阅读更多
17 个人发现此评论有用

Jollygreen
4.0 颗星，最多 5 颗星 better front and edge protection and I think I've found ...
2017年10月7日 - 已在美国亚马逊上发表
已确认购买
This case is very attractive and more protective than the minimalist case I was using. I wanted better front and edge protection and I think I've found it. The buttons push easily, the flaps open easily. I will say the built in screen protector greatly reduced touch sensitivity. I removed the screen protector and added a tempered glass. I am very happy with the combination and feel like the edges are much better protected than other available cases. Some may not like that, but it's just extra protection that I want. Would be 5 stars if the built in screen protector was more responsive, so 4 it is. Update 6 weeks later: dropped my phone onto the tile floor. My phone is intact and unscathed but the front plastic frame of the case cracked. It was a pretty good impact because the S-pen popped out. Wondering if superglue is the solution or if its protection is compromised and need to reorder.
阅读更多
10 个人发现此评论有用

Angelica &amp; Ray
3.0 颗星，最多 5 颗星 Great case... terrible screen protector.
2017年9月30日 - 已在美国亚马逊上发表
已确认购买
Well the case itself is great quality like all other poetic cases. However the main reason I bought this one was for the screen protector and it's pretty bad.
1. It doesn't lay Flush on the screen so you have to press down hard enough to make the protector press down onto what you're touching.
2. The edges are the worst offender you really have to press to hit the delete button and all letters near the edge. Actually attempting to type this review with the case on and intact. The more I type the more I hate it.
3. The terrible hideous "dot matrix"! Well if you love the idea of 100's of tiny little dots all over your screen then you'll love this screen protector. Really ruins the high quality beautiful display. Keeps making me want to wipe the screen because it just looks dirty but nope it's just 100's of dots.
4. If you use the s Pen at all you don't want this protector at all. Creates crazy drag and actually wears the tip down surprisingly fast. Tested it out a tiny bit and have noticeable wear in minutes that I didn't have prior. It's like the friction it creates is just burning up the tip. Can't be sensitive at all if you like to draw.
5. Better off just accepting screen scratches it'll still look better and respond better than what this does to your screen.
6. Rip the screen protector off and trash it!

Apart from the screen protector the case itself is well crafted and the buttons press perfectly and the fingerprint sensor cutout is perfect. The 2 tone black and silver look good together if you don't mind losing the "infinity display" look because the top bezel and bottom bezel are covered.
阅读更多
15 个人发现此评论有用
加入亚马逊Prime，从此免运费
亚马逊Prime会员可享海外购美/英/日/德跨境免邮，全年无限次！更有免费无限次阅读电子书服务
> 立即加入
了解我们
合作信息
支付方式
帮助中心和购物指南