Wolves Chronicles （此书共有11卷） Kindle 电子书
Wolves Chronicles （此书共有11卷）
Kindle 电子书
From Book 1: Wicked wolves and a grim governess threaten Bonnie and her cousin Sylvia when Bonnie's parents leave Willoughby Chase for a sea voyage. Left in the care of the cruel Miss Slighcarp, the girls can hardly believe what is happening to their once happy home. The servants are dismissed, the furniture is sold, and Bonnie and Sylvia are sent to a prison-like orphan school. It seems as if the endless hours of drudgery will never cease.

With the help of Simon the gooseboy and his flock, they escape. But how will they ever get Willoughby Chase free from the clutches of the evil Miss Slighcarp?
阅读更多 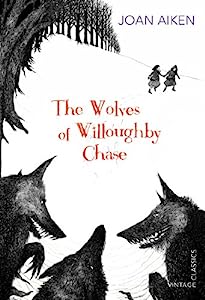 Can you go a little faster? Can you run?

Long ago, at a time in history that never happened, England was overrun with wolves. But as Bonnie and her cousin Sylvia discover, real danger often lies closer to home. Their new governess, Miss Slighcarp, doesn't seem at all nice. She shuts Bonnie in a cupboard, fires the faithful servants and sends the cousins far away from Willoughby Chase to a place they will never be found. Can Bonnie and Sylvia outwit the wicked Miss Slighcarp and her network of criminals, forgers and snitches?

BACKSTORY: Find out a few things you didn't know about wolves and learn all about the wonderful world of the author. 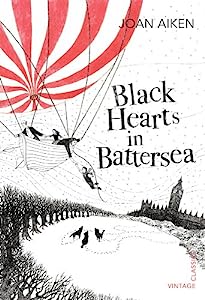 Simon is determined to become a painter when he grows up so he sets off to London to make his fortune. But the city is plagued by wolves and mysterious disappearances. The Twite household, where Simon is lodging, seems particularly shifty. Before he even gets a chance to open his glistening new paints Simon stumbles right into the centre of a plot to kill the King. And worse than that Simon is kidnapped and sent to sea! Luckily there are two friendly stowaways aboard – the feisty Dido Twite and the spoiled young Justin. But when the ship catches fire things look pretty dire. Can they escape? Will they save the king in time?

BACKSTORY: Test your knowledge of Black Hearts in Battersea and play the name game. Having had enough of life on board the ship that saved her from a watery grave, Dido Twite wants nothing more than to sail home to England. Instead, Captain Casket's ship lands in Nantucket, where Dido and the captain's daughter, Dutiful Penitence, are left in the care of Dutiful's sinister Aunt Tribulation. In Tribulation's farmhouse, life is unbearable. When mysterious men lurk about in the evening fog, the resourceful Dido rallies against their shenanigans with help from Dutiful, a cabinboy named Nate, and a pink whale. 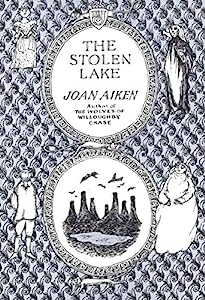 In this fantasy adventure, a young girl visits a land where birds carry off men, fish eat human flesh, and she must rescue a pilfered lake.

Readers who have followed Dido Twite’s escapades in Black Hearts in Battersea and Nightbirds on Nantucket will welcome her return in her wildest escapade yet.

Now back in print, The Cuckoo Tree and The Stolen Lake continue the Wolves Chronicles, the exhilarating and imaginative series that stemmed from Joan Aiken’s classic The Wolves of Willoughby Chase.

A dazzling piece of dramatic, snowballing adventure, The Stolen Lake is full of fantastical details: revolving palaces, witches who are also court dressmakers, an apocalyptic volcanic eruption, and an infernal country with a noticeable lack of female children. On her way back to London aboard the British man-of-war Thrush, twelve-year-old Dido Twite finds herself and the crew summoned to the aid of the tyrannical queen of New Cumbria. A neighboring king has stolen the queen’s lake and is holding it for ransom, and it’s up to Dido and the crew to face fire, flood, execution, and wild beasts to get the lake back—or else.

Perfect for fans of Lemony Snicket and Roald Dahl

“The adventure Miss Aiken has dished up . . . in The Stolen Lake is zanier and more devilishly fiendish than ever.” —New York Times 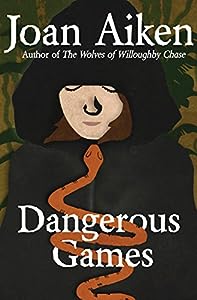 Sailing the high seas in pursuit of Lord Herodsfoot, roving ambassador to the ageing King James III, Dido Twite’s search has led her to the remote South Sea island of Aratu. She arrives with a new friend she made en route, the enigmatic Dr. Talisman, who is returning to the isle after many years. Soon they discover that there’s something even more dangerous in the ancient rain forest than its poisonous pearl snakes, sting monkeys, and 30-foot-long crocodiles. Dido and Talisman are confronted by the Angrian invaders, who drove the Dilendi natives from their home 400 years earlier. Luckily, Dido befriends the gentle Forest People, who can heal with their magical touch.

When she learns about a plot to overthrow the island’s suffering king, Dido enlists the Forest People to help her thwart the scheme, save the monarch, and reunite him with his long-lost daughter.

Dangerous Games is the 5th book in the award-winning Wolves Chronicles, but you may enjoy reading the series in any order. 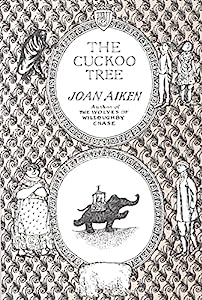 Dido Twite, a roving ambassador to the King of England, is on her way home to London when her friend Captain Hughes is injured in a stagecoach accident. When Dido seeks help, she encounters the odd inhabitants of Tegleaze Manor: strange old Lady Tegleaze, her nephew, Tobit, and his wizened, witchy nurse, Sannie. Soon suspicious things happen.

A priceless miniature is stolen. Tobit is framed and then kidnapped. A twin sister is found. And when Dido catches a glimpse of her rascally father in Petworth, she is sure she’s in the midst of another Hanoverian plot. Can she get to London to warn the king and save St. Paul's Cathedral from sliding into the Thames?

The Cuckoo Tree is the sixth book in the award-winning Wolves Chronicles, but you may enjoy reading the series in any order.
阅读更多

7
Dido and Pa (Wolves Chronicles Book 7) (English Edition)
来自 Joan Aiken (作者)
星级评价：4.7 星，共 5 星 (19)
￥65.64
A teenage adventurer gets wrapped up in her father’s dastardly schemes in this children’s novel by the author of The Wolves of Willoughby Chase.

Dido Twite is finally back in London and reunited with her old friend Simon, now the Duke of Battersea and a favorite of King Richard. But no sooner does Dido start to settle in than her rascally father, Abednago, appears and drags her off into the night.

Soon Dido finds herself caught in the midst of another dastardly conspiracy: a Hanoverian plot involving a mysterious double for the king, the miraculous healing powers of music, and a spy network made up of abandoned street children called lollpoops. Meanwhile, out in the forest, starving wolves are closing in on the city . . .

Dido and Pa is the seventh book in the award-winning Wolves Chronicles, but you may enjoy reading the series in any order.
阅读更多 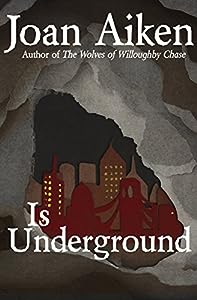 8
Is Underground (The Wolves Chronicles Book 8) (English Edition)
来自 Joan Aiken (作者)
星级评价：4.6 星，共 5 星 (11)
￥14.54
The children of London are disappearing—can Is solve the mystery before she vanishes too?

Is Twite, younger sister of the daring Dido, is on a desperate mission. An uncle she never knew just showed up at the cottage she shares with her sister Penny. He is being pursued by ravening wolves, and before he dies, the uncle begs her to find his missing son—Is’s cousin, Arun.

The quest takes Is to London—a city mysteriously devoid of children, including the king’s only son and heir. Is soon finds herself aboard the Playland Express, a secret midnight train that leaves town once a month, just before the new moon. The kids aboard believe they’re headed to a far-off kingdom filled with fun and games. In reality, Playland is a freezing underground city ruled by the greedy “Gold Kingy,” who has lured the youngsters there under false pretenses. His real objective is to put them to work in the coal mines. But the worst is yet to come: Gold Kingy is none other than Is’s other uncle Roy! Now it’s up to Is to avoid a terrible fate and use her wits, ingenuity, and powers of telepathic communication to free the children.

Is Underground is the 8th book in the award-winning Wolves Chronicles, but you may enjoy reading the series in any order. 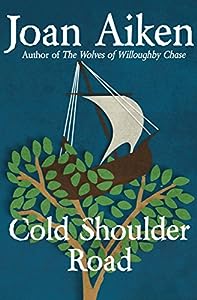 When Is Twite and her cousin, Arun, return to Cold Shoulder Road in Folkestone after their astonishing adventures in the North, the town is deserted and Arun’s mother is missing. Some say she took off with the sect Arun was raised in before he ran away. Known as the Silent Folk, members of the group are not allowed to talk and must communicate through sign language. But there are others who insist that Ruth Twite is a witch. To make matters worse, Is’s sister Penny has also vanished, along with the mute Handsel child. The only clue to all of their whereabouts is an elusive stranger called Admiral Fishskin.

When Is and Arun finally track down the cult, Arun discovers that they have new leader. Evil, charismatic Dominic de la Twite plays dangerous mind games and is able to block telepathic communication between Is and Arun. The cousins also find themselves up against a band of smugglers called the Merry Gentry that is using hidden tunnels beneath the city to search for buried treasure.

With its sprawling cast of Dickensian characters and imaginative historical and social setting, this gripping adventure will delight existing fans of the Wolves Chronicles and new readers alike.

Cold Shoulder Road is the 9th book in the award-winning Wolves Chronicles, but you may enjoy reading the series in any order. 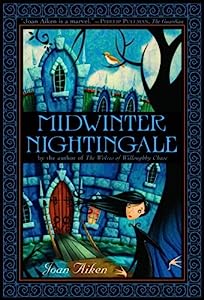 10
Midwinter Nightingale (Wolves Chronicles Book 10) (English Edition)
来自 Joan Aiken (作者)
星级评价：4.2 星，共 5 星 (11)
￥40.82
Dido and Simon are in danger in this new addition to the Wolves Chronicles. Dido, back in England from America, is almost instantly kidnapped and taken to a derelict mansion surrounded by a deadly moat. The evil baron residing there, who is also a werewolf, wants desperately to know where King Dick is hidden. For the king is dying, and the evil baron wants to put his own demented son on the throne. Meanwhile Simon is with the ailing king. Not only does King Dick want Simon to paint a portrait of him and his family, but Simon is also next in line for the throne. However, they do need to find the coronet for the ceremony that will crown Simon. Though the coronet is rumored to be in the derelict mansion where Dido is imprisoned, no one can find it. It’s one cliffhanging, hair-raising chapter after another in this tongue-in-cheek, devilishly delicious adventure.
阅读更多
处理您的请求时出错，请稍后重试。
无效的输入
输入介于1和11之间的值。
回到顶部
了解我们
合作信息
帮助中心和购物指南
亚马逊家族网站:
© 1996-2022，Amazon.com, Inc.或其附属公司