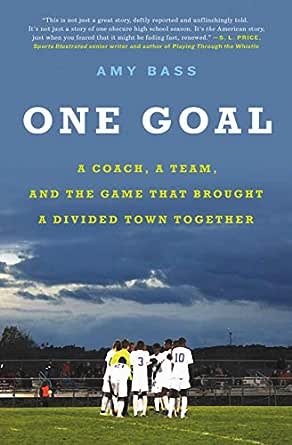 One Goal: A Coach, a Team, and the Game That Brought a Divided Town Together (English Edition) Kindle电子书

"A lively, informative, and entertaining...underdog story that skillfully blends elements of human compassion, passion for a sport, determination, and endurance with overtones of societal pressure and racism. It's an exhilarating narrative that shows how perseverance and the ability to disregard the narrow-mindedness of xenophobia can lead to victory....An edifying and adrenaline-charged tale."
--Kirkus Reviews (starred review)


"At a time when America seems consumed by divisiveness and hate, along comes One Goal, a beautiful and important reminder that humanity's strength is its togetherness. Yes, on the surface this is a soccer book. But Amy Bass' work is so much more. It's about overcoming odds, about embracing differences, about the triumph of will and spirit. A true gem of a book."--Jeff Pearlman, New York Times bestselling author of The Bad Guys Won and Gunslinger

"In this gripping account of Lewiston's journey to its first-ever high-school soccer state championship, history professor Bass vividly tells the stories of the Somalis and Lewiston, exploring the resistance and racism the refugees faced in town and on the field....a heartening example of sport's ability to bring people together...Engrossing and informative."
--Booklist

"Amy Bass tells a story that encompasses many of the things people love about sports, but also epitomizes many of the reasons sports matter."--Bob Costas


"In this noisy era of glib hot-takes and childish finger-pointing, it's too easy to forget that the national character--hardworking, immigrant-fueled, optimistic--was built from the bottom up. Let Amy Bass remind you. Let her take you to our frosty upper righthand corner, to Lewiston, Maine, where quiet heroes like Mike McGraw, Abdi H. and the magical Blue Devils show again just how it's done. This is not just a great story, deftly reported and unflinchingly told. It's not just a story of one obscure high school season. It's the American story, just when you feared that it might be fading fast, renewed."--S.L. Price, Sports Illustrated Senior Writer and author of Playing Through The Whistle: Steel, Football and an American Town

"One Goal has made me feel optimistic about the country I live in. The vibrant, colorful and courageous characters will make you smile. The coach of the Blue Devils, Mike McGraw, is the kind of man you wish your own kids could learn from- and he teaches a lot more than soccer. One Goal is about so much more than sports. It illustrates how powerful and transcendent teamwork and community can be."--Mary Carillo, analyst, NBC Sports


"Wondrous....The players' humble triumphs remind us that no win is too small....One Goal illustrates how sport changed the history of a small town in Maine and connected so many people. It's a relevant tale in today's political climate, where fear and bigotry can be conquered by inclusion, understanding, and the beautiful game."--Shireen Ahmed, co-host of the Burn It All Down podcast


"[A] relevant and rewarding narrative... Bass's effective portrayal of Lewiston as a microcosm of America's changing culture should be required reading."--Publishers Weekly


"Bass captures the essence of this unlikely band of brothers perfectly. This isn't a story about a soccer team....More than anything, this is a story of hope. The hope that brought thousands of Africans to a remote corner of the America in search of a better life. The hope that made a city finally open its arms to the children of those immigrants. The hope that our future still might be better than our past."--Tom Caron, anchor, New England Sports Network

A professor of history in New York, Amy Bass lived in Lewiston, Maine for four years as a student at Bates College. Her writing has appeared in Slate, Salon, and CNN Opinion, and her work for NBC's Olympics coverage earned her an Emmy in 2012 for Outstanding Live Event Turnaround. One Goal is her fourth book. --此文字指其他 kindle_edition 版本。

Sean D. Elliot
5.0 颗星，最多 5 颗星 While it is true that I would have greatly enjoyed reading this book in one lengthy sitting
2018年3月22日 - 已在美国亚马逊上发表
已确认购买
It has been suggested that if all I say is "I didn't want to put it down" I've said enough about this book. I beg to differ on that matter. While it is true that I would have greatly enjoyed reading this book in one lengthy sitting, there is much more to it than that. Amy Bass has spun a tale, or rather shared a story (since it's factual reporting, not fiction) which is heart-warming, and compelling, and inspiring, and informative, and educational with such grace and skill that it most certainly deserved all the accolades I've read in other places. First, and foremost, it's an inspirational sports story, the story of a comeback, a team that takes disappointment and turns it into joy. Beyond that though it is also the story of the American dream, of immigrants and a community and how they found some measure of common ground around that inspirational sports story. I was immediately drawn in to the story of coach Walsh and his team and how they navigated the challenges before them, and the community and how they rallied around the team, and battled narrow-mindedness and xenophobia because the game of soccer gave them common ground from which to build relationships. I'm sure Lewiston is not Utopia, I'm sure the immigrants to that community still face discrimination, but I'm also sure that because of the efforts, inspired by soccer, of those in the community who did not surrender to the forces of negativity around them. This is a story deeply rooted in our times that will be an important lesson for future generations.
阅读更多
7 个人发现此评论有用

Andrew B Gluck
5.0 颗星，最多 5 颗星 If you like an inspirational sports story
2018年3月9日 - 已在美国亚马逊上发表
已确认购买
Oh my! Amy Bass scores with ONE GOAL. If you like an inspirational sports story, fact or fiction, (insert ROCKY or 1980 Lake Placid USA hockey) you will LOVE this book. But wait, if you are not a sports fan, or a soccer one for that matter, this story goes much further. This is a feel good story of accepting immigrants into our communities. These kids brought a community together and showed how our world is a small place, if you open you arms and hearts to others. Buy it, read it and buy more for your family and friends. Lastly, a great read for ALL ages. Teachers and parents can make it a read-aloud, middle schoolers and high schoolers will devour it. Enjoy!
阅读更多
4 个人发现此评论有用

ItsMe
5.0 颗星，最多 5 颗星 Thanks, Amy Bass! You made me care A ...
2018年4月6日 - 已在美国亚马逊上发表
已确认购买
Thanks, Amy Bass! You made me care A LOT about high school soccer in Lewiston, ME - never words I thought I’d say. With whit, charm, and the generosity and honor they so deserve, Bass tells the story of Somali refugees and how they rise above their pasts spent in camps and fleeing from war and their present lives in small town ME where they are unwelcome, to form one team with One Goal.
This book will make you want to stand up and cheer, will make you remember that one coach who made you feel special, and will make you think about how we, as Americans, treat those we accept into our borders, those other than ourselves.
阅读更多
4 个人发现此评论有用

G. Ehrlich
5.0 颗星，最多 5 颗星 No need to love soccer to love this book!
2018年4月19日 - 已在美国亚马逊上发表
已确认购买
What a compelling and interesting read! You don’t have to be a soccer fan to enjoy it, although you can learn a lot about the sport, like how fantastic a flip-throw is. A fascinating account of how, through soccer, the Somali refugee community transformed Lewiston, Maine. Highly recommend.
阅读更多
4 个人发现此评论有用
加入亚马逊Prime，从此免运费
亚马逊Prime会员可享海外购美/英/日/德跨境免邮，全年无限次！更有免费无限次阅读电子书服务
> 立即加入
了解我们
合作信息
帮助中心和购物指南