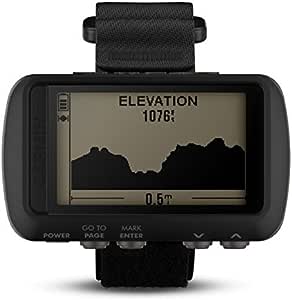 Buy the separate Quick Fit Watch band, the included strap is garbage. I do not understand why the straps are different than the one from the my previous generation Quantix. The default resolution (medium) is way to low from my tracking needs. I wish the resolution setting for auto were defined. And of course all Garmin manuals are lacking in detail, but this one sets a new low.

So the biggest upgrades from the 401 to the 601 are as follows.
1. Battery Life- Like this is enough of an upgrade alone to justify it, if you are using these in the Military, or just use them often. I went from having to change my batteries every mission, to changing them every 3-4 days of heavy use.

2. Built in Watch- Having the ability to now tell time is great, its saves you from having to carry another thing around your wrist, and works well. The watch only mode allows you to use this without taking much battery life at all, so you wont have to worry about it draining your battery supply for a watch.

3. Back Light- The back light on this is way better than the 401's orange light. It has the ability to be super bright if you need a quick flashlight type ability, and on the other end of the spectrum, it has a night vision mode that is very dim and even on the darkest nights, cannot be seen past 10-15 meters.

4. Screen- It has a much better resolution and slightly bigger screen on it, allowing you to more easily see everything displayed.

5. GPS- The GPS seems like it connects a little faster than the 401 and is slightly more accurate at the single digit meter level, But that aspect is not a huge difference from the 401.

Overall- If you are in the military or use GPS's a lot, this thing is amazing. It is small, doesn't kill your batteries and works extremely well.

If you have a 401 already...trust me when i say the battery life alone makes this worth the upgrade.

As a longtime user of their products, I decided to give Garmin the benefit of the doubt, and picked up another Foretrex 601. One of the first tasks was to update the firmware to 2.70 (the most recent version) to see the improvements that have been made over the last year.

I'm happy to report that the unit doesn't crash, even when recording a long track log, and there doesn't appear to be any more random freezes or restarts. Battery life, even while recording a track log, is outstanding (probably the best I've seen on any Garmin device).

That being said, IMHO, Garmin still needs to address a few FW issues, as well as possibly some QC:

- My unit had a button that only worked intermittently (page button).
- Despite marketing material about barometric pressure trends and weather forecasting, there doesn't seem to be a way to clearly enable or display a barometric pressure plot option on the elevation page.
- The elevation page still doesn't show data at certain zoom levels when recording or viewing a track (it says "loading" but then doesn't load the elevation profile).
- Still no accuracy / EPE reading for the GPS satellite page.
- Track logs imported to BaseCamp still don't show overall distance, just the distance of each leg.
- Elevation readings were still off by hundreds of feet after only a few hours, despite calibration to a local weather station (can also be the nature of the beast with barometric altimeters).
- No way to view GPS satellite elevation as a data field (sometimes more accurate than barometric altimeter elevation, esp. with the extra satellite constellations available - e.g., GPS + GLONASS).

Suggested Improvements for the Foretrex 601:

- If the idea is to keep the user interface nearly the same as the Foretrex 401 series for commonality, offer an "advanced" user profile option or menu choice with a way to enable: longer waypoint names, waypoint averaging, and any other add-on features.

Overall, I'm going to bump my review up to three stars. I think Garmin has made several improvements to the firmware and the Foretrex 601 is much more stable versus a year ago, and didn't crash at all during my use. Unfortunately, due to the QC issue with a button that worked intermittently, my unit was ultimately returned. As another reviewer mentioned, the battery life compared to the Foretrex 401 is probably the biggest upgrade between the two models. Still, for someone looking for a small basic GPS for outdoors, hiking, traveling, or .mil use, it's definitely worth a closer look. (Just ensure that your unit is updated to the latest firmware and double-check that all buttons work.)

Unfortunately, IMHO, the firmware still needs some work. On a unit running the latest firmware as of Sept. 2017 (v2.10), there are a few things that appeared in use:

Then, of course, there are things that would be "nice" to have, but I'm not going to complain, as the Foretrex 401 didn't have these either:

My hope is that Garmin improves the firmware ASAP on the Foretrex 601. Until then, having the unit freeze while working with tracks, for example, is a huge problem -- I'd hate to be in the field and discover this. Until changes are made, I can't recommend this unit, and am withholding a higher review. More than like Garmin will address these issues, but if you are an early adopter, please be aware of them.
阅读更多
118 个人发现此评论有用
加入亚马逊Prime，从此免运费
亚马逊Prime会员可享海外购美/英/日/德跨境免邮，全年无限次！更有免费无限次阅读电子书服务
> 立即加入
了解我们
合作信息
帮助中心和购物指南