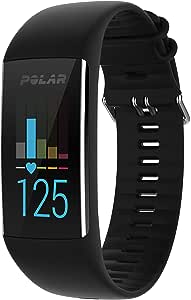 技术细节
更多信息
我来补充
Would you like to tell us about a lower price?

When my wife and I had 3 Fitbits go bad in the space of not much more than a year, I decided it was time to try another brand. I already had a Polar H7 heart rate monitor (HRM) with chest strap and was really pleased with it (I give it 5 stars) and the Polar Beat app (4 stars from me) which I used during workouts. I have a lot of Garmin products and really like them, but they’re for navigation, not fitness. Two things struck me as I looked at the Garmin Vivoactive and somewhat similar Polar A370 customer satisfaction scores on Amazon: First, both had a lot of reviewers giving poor marks (1 or 2 stars); the Polar had 29% of reviewers give poor marks while Garmin had 23%, and second there were only 106 reviews for Polar compared to 2964 for Garmin (and more than 10,000 for the Fitbit which I will never use again). Apparently not many people buying Polar.

I decided to look at both the Garmin Vivoactive and Polar A370 before buying. The Garmin was everywhere but I couldn’t find Polar. As a result I contacted Polar Customer Service and asked what stores in the greater Seattle area carried their products; amazingly, they couldn’t tell me. Ultimately I decided to buy the Polar A370 for continuity and compatibility with my database on Polar’s web site as well as my satisfaction with the Polar Beat App and my Polar H7 HRM.

After a week and a half I have decided to give the Polar A370 3 stars and not recommend it for people not already Polar customers familiar with Polar. After 3 weeks I decided to return the product and downgraded my rating to 2 stars
• Similar to the observations of multiple people who gave the A370 only 1 or 2 stars, I find that the BATTERY IS UNACCEPTABLE. I have to charge the battery twice a day in order to wear the A370 day and night. The battery only lasts 10 to 15 hours 1 star for the battery.
• Pairing the A370 is usually a frustrating task. I have half a dozen items that I pair with my phone using Bluetooth; only the A370 gives me trouble. It normally takes me 4 or 5 tries to get a pair. Frequently I get a message on both the A370 and my phone that the devices are syncing then I get a message on the A370 that says the sync failed. I also frequently have to enter a 6 digit number on my phone to authorize the A370 – this is the only device I have which requires this. 1 1/2 stars for Bluetooth.
• In order to use the A370 you have to have the Polar Flow app on your phone (not Polar Beat which is specifically for capturing heart rate and monitoring exercise). The app is not at all intuitive and there are no instructions (per contact with Polar Customer Service). I do like seeing what my heart rate was during the night. 3 stars for the Polar Flow app
• Progress against my activity goal is measured constantly and reported to me as a percentage. Problem is I have no clue what my activity goal is. The only goal I can set is a nebulous statement about how active a person I will be – no way that I have found to set metrics. My (failed) Fitbits were much better at goal setting and monitoring progress. 2 stars for goal setting.
阅读更多
125 个人发现此评论有用

dawnn helene
5.0 颗星，最多 5 颗星 So far, no real complaints...
2017年6月21日 - 已在美国亚马逊上发表
已确认购买
So far 5 stars...I have tried and tested a lot of wearables so I really hope this one is a keeper. I've owned or tried: Apple Watch 2 Nike Edition, Fitbit: Surge, Blaze, Charge HR, Flex 2, Garmin 735, 235, Polar 300/400/360 MOOV, Up3, and BodyMedia Band, I am sure I forgot something. The package came last night and the set up to the computer as well as the phone app was pretty easy, no syncing issues at all. I ordered the white, not by choice but it was the only color that came in small. I really despise white but it’s more of a dull white, not super bright so that helps. I wore for sleep tracking and I did wake up at midnight so it caught that as my ‘bedtime’ so the sleep was a little broken there.

At the gym
I always pair my watches with straps for the accuracy, I wanted to test the optical with strength training though. I have to say I was pleasantly surprised with the results. It was a shorter workout but leg day, so squats and other movements using my wrists. It held its own, when I look at other opticals it says random numbers like 60 BPM mid workout. This was always in the correct zone, and this has never happened to me with any other watch or wearable. I am hoping this is not a fluke and will try again tomorrow. My weights followed with cardio which was also pretty steady using the built in optical.

Battery Life
The only thing I question is the battery life, I keep all notifications off all the time but it looks like I am half way through my battery already and its suppose to last several days, so this is questionable

I posted a photo of the weight training, I took a few minutes to set up and a warm up set so the HR in the beginning is correct.

I’ll continue to update as I test this all week… Stay tuned.
阅读更多

Chrissy
4.0 颗星，最多 5 颗星 Evolution of A360
2017年6月21日 - 已在美国亚马逊上发表
已确认购买
6/25/17 Update: Added screenshots from the mobile application. These show the new "Day" view. A gear button was added to the top-right corner to toggle between the two types of views for the day. On the first view, (circular one), you can touch the icons to view a pop-up displaying brief description of what the icon represents such as min-max heart rate for the day. On the other screen, you can see how your heart rate changes throughout the day, with the most significant parts noted with a circular icon (min-max for when you're sleeping and awake). The bottom section below the graphs show summary details such as calories and steps.

6/23/17 Update: Fairly pleased with tracking so far, though for some reason the watch didn't record my detailed sleep analysis last night. Not sure what happened. Also! I attached a new photo showing a comparison of the new A370 (bottom) and old A360 band (top). Visual confirmation that they made the new band longer. I'm so displeased with how ugly and long this new one is that I'm switching back to my A360 band (thankfully old band is compatible with A370). I don't know why they would make the new one longer when there are already medium-large sizes available...

Original: Been happily using my A360 watch since it released a few years ago, so I was ecstatic to hear the announcement of the A370. Overall it's everything I loved about the A360 watch (sports profiles, heart rate zones, useful graphs, good battery, etc.) but finally with all day heart rate tracking and more detailed sleep tracking information. My only complaint is the larger small-sized band. As you can see in the photo, it looks too large on my wrist with the extra band material at the end. If I move the clip to the end to hold it down, the middle part bends upwards. I didn't have these issues with the small-sized A360 band. I looked at the band label, and they seemed to have made the size range for the band Small-Medium opposed to just Small. It wouldn't be a big deal to me, but it looks unappealing for all-day wear, and it gets in my way during HIIT workouts (i.e. hitting the flap with my hand during certain workout moves). Please think of us folks with small wrists.
阅读更多