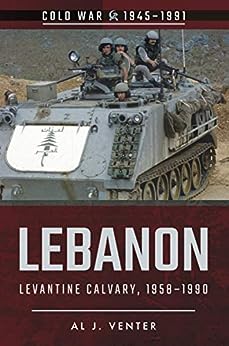 英语版本 Al J. Venter (作者) 格式: Kindle电子书
|
分享
分享 <分享样章>
广告
显示所有 格式和版本 隐藏其他格式和版本
When the world held its breath It is 25 years since the end of the Cold War, now a generation old. It began over 75 years ago, in 1944long before the last shots of the Second World War had echoed across the wastelands of Eastern Europewith the brutal Greek Civil War. The battle lines are no longer drawn, but they linger on, unwittingly or not, in conflict zones such as Iraq, Somalia and Ukraine. In an era of mass-produced AK-47s and ICBMs, one such flashpoint was the LevantIt is axiomatic that the recent history of much of the Eastern Mediterranean is linked to the creation of the state of Israel in May 1948, incontestably so. The country emerged from a series of conflicts and these have continued intermittently ever since, fuelled as much by ArabIsraeli enmity, national pride and territorial aspirations as hostile neighbours. Syria, Jordan, Lebanon and Egypt and in the latter phases, Iran were all part of it. There were rich pickings in the regions for the two great powers of the Cold War as they aligned with one side or the other, the Soviets in full support of Arab interests and the Jewish State enjoying the support of Washington. That combination not only led to several Middle Eastern wars but, as we are able to observe in todays news reports, the knock-on effect continues in Lebanon, Jordan, Egypt and Syria especially. For much of the period under review it was Lebanon that took the brunt of it, with resident Christian, Sunni, Shiite as well as Israeli interests deploying multiple levels of force much of it clandestine to jockey for predominance. Throughout, land, sea and air forces were involved.Al Venter has devoted a good deal of his career towards covering these developments, from the early 1970s all the way through to the end of the Lebanese civil war in 1991. He has been to war with both Arab and Jew (he was with the IDF strike force headed by Ariel Sharon when he entered Beirut in 1982); spent time in Syria (visited that countrys southern front adjacent to the Golan Heights); been on combat missions with the Israeli-backed South Lebanese Army in the Druze homeland adjacent to Mount Heron and has been embedded with the Lebanese Force Command along Beiruts Green Line, where many of his photos used in this publication were taken. Venter also spent a lot of time in South Lebanon with UNIFIL, the United Nations Interim Force in Lebanon, and was able to observe from up close the growing influence of the Pasdaran, Tehrans surrogate force in the region that eventually spawned Hezhollah. His last visit, in 1997, included contacts while hosted by Lebanese President General mile Lahoud with senior Iranian-supported Hezbollah elements in Beirut, one of few Western correspondents to have achieved this distinction.
阅读更多
›  查看更多商品促销信息

Peter Atack
1.0 颗星，最多 5 颗星 Not really a book on the Civil War...
2021年5月8日 - 已在美国亚马逊上发表
已确认购买
Don't purchase this if you are looking to learn about the Lebanese Civil War. This is largely just a boring recollection of stuff the author did / heard while he was in the Lebanon sprinkled with some middle school level summaries of events leading to or taking place in the war. Pics are not very useful either.
阅读更多
1 个人发现此评论有用

Scott Bailey
3.0 颗星，最多 5 颗星 Basic overview
2018年5月19日 - 已在美国亚马逊上发表
已确认购买
Book covers the war with a first hand knowledge from the author while living in Lebanon. Book is easy to read and follow with some of the interesting portion being the early roots and history to the civil war in the 80s. Book has pictures and maps that give the book an additional plus.
阅读更多
1 个人发现此评论有用