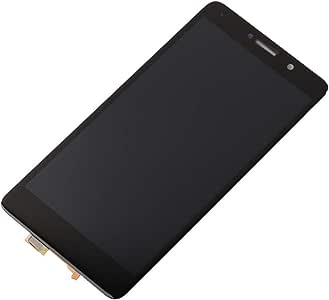 PROS: it looks nice. My phone was originally two-tone, gold back with a white faceplate-- now the faceplate matches, but the white bezel edge had to be left in place. The replacement screen is also almost as sensitive as the original, meaning it responds instantly to most imput. It also has a crisp display.

CONS: The display isn't quite as vivid, so all the colors are a bit washed out, but it's not super noticable. My main issue is typing on the screen-- many times is registers a double-tap accidentally: I'll type "fun" and it'll come out as "fuun". Happens all the time! I can circumvent this by using Swipe, but it's still very annoying. AND the edges of the screen are not sensitive enough! Many times I have to tap several times, HARD, before it reacts.

Overall, I'm torn on if I should recommend this product. The price is great, but the product is a bit mediocre. If you're in a pinch and need a new cheap screen, this will do the job mostly satisfactorily, just be aware it'll have some quirks.
阅读更多
1 个人发现此评论有用

creator
1.0 颗星，最多 5 颗星 Don't even look at it. Faulty product
2019年8月26日 - 已在美国亚马逊上发表
颜色: 黑色已确认购买
You get what you pay for. I was wondering why this is so cheap it's because it's garbage. That works when it wants sometimes the screen freezes when it wants and ntn can be touched until I hard reset the phone also typing with is a disaster. My old cracked screen typed better.
阅读更多

David France
2.0 颗星，最多 5 颗星 Wish I'd have bought a genuine replacement screen.
2019年7月20日 - 已在美国亚马逊上发表
颜色: 黑色已确认购买
Screen color is very dull and keyboard buttons are sometimes slow to respond. Since I have 2 other Honor 6x phones to compare it, the difference is very noticeable. Otherwise it works fine, but I wish I'd have spent more on a genuine Honor 6x screen.
阅读更多
1 个人发现此评论有用

Peshewa
1.0 颗星，最多 5 颗星 This is awful.
2018年7月30日 - 已在美国亚马逊上发表
颜色: 黑色已确认购买
Seemed ok, but there is a bright white spot near the middle of the screen that doesn't go away. After a few days using it, the screen is barely responsive. I will not buy this again.
阅读更多
1 个人发现此评论有用