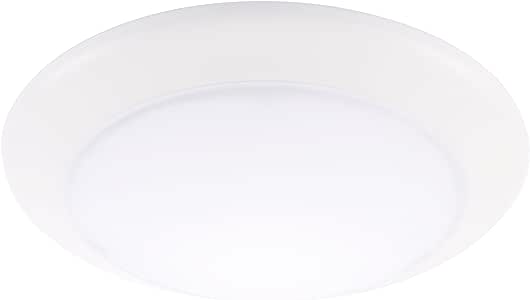 Christopher R.
5.0 颗星，最多 5 颗星 Great value and easy to install
2017年1月28日 - 已在美国亚马逊上发表
已确认购买
Simple to install in my shower ceiling, but my junction box was not flush with ceiling so had to buy longer screws. Took me about 40 minutes because I forgot the foam trim the first time. Doh! Comes with mated connectors that the 2 pairs of wires just slide into to make the electrical hookup a snap. Bronze trim is metal, not plastic! The 3000K soft white at 900 lumens is plenty bright even during the day with other bathroom lights on. Looks great! Saved $15 over the local home improvement store because I would have had to buy the bronze trim piece separately. Wife loves it so great buy.
阅读更多
8 个人发现此评论有用

JK
4.0 颗星，最多 5 颗星 Great light. Improved our shower. Looks nice. The size was confusing, but works well for us.
2018年2月20日 - 已在美国亚马逊上发表
已确认购买
We are happy with this light. We installed it above our shower in a bathroom that has 10' ceilings. It has definitely brightened the area - providing plenty of light for tasks such as shaving ones legs. We purchased the bright white, which creates kind of an institutional type lighting with the white tub - If I was to purchase again, I would definitely go with the warm light rather than this cooler one. The light is too bright to comfortably look up at, but is not too bright in the tub & shower area that we were trying to illuminate. It is a small light, but brightens the whole shower area evenly - which is what we were going for. These lights are supposed to last a long time. I hope that is true since the bulbs are not replaceable. I would also like to mention that the white surface of the light is about 5 1/2" in diameter. The entire light (including bronze rim) is approximately 7" wide.

My husband said installation was fairly easy. If he were to suggest any improvements, it would be to provide those holes with slits for the screws that you turn. Hope that makes sense. He said this would improve it and make the screws easier to get in, because that was the only part that he found difficult. He did have to use longer screws than provided, but that was because of an unusual mounting situation, not because of the light.

Update: OK, I changed my mind about the color of the light. We find that this light helps us wake up in the morning in the shower - less 'groggy'. So, if I had to buy another one, I would choose the white light again. We are; however, going to put it on a separate switch from our other lights, so that it doesn't 'clash' with our other lights in the bathroom. That way, we can enjoy the 'wake me up' effect of this light first thing in the morning without giving up the warm welcoming atmosphere that we've worked so hard to achieve with the other lights in our bathroom the rest of the day.
阅读更多
2 个人发现此评论有用

V. Lee
5.0 颗星，最多 5 颗星 plenty of light
2017年9月24日 - 已在美国亚马逊上发表
已确认购买
remodeled my master closet which has an angled ceiling since it's in the attic space. The contractor said since the ceiling of the closet is the roof of our house that there wasn't any space between the roof and the ceiling to place a normal sized recessed light fixture. I know they make LED in recessed fixtures that only need 4" of depth but the issue with that type of fixture on a ceiling that is sloped is that the light would be more like a spot light and not diffuse the light in all directions. So I found these which are ceiling mounted and not recessed. He was skeptical at first until they were installed and VOILA! we've got light and it gives a nice diffused light so all areas receive light. They are modern looking and work nicely with the style of finish I was looking for. The only thing with these lights is that when left on for any amount of time the metal brushed nickel ring gets kind of hot enough so that when touching with your finger it's hot enough that you don't want to keep your finger on it.
阅读更多

Saarfels
4.0 颗星，最多 5 颗星 Easy installation
2017年7月21日 - 已在美国亚马逊上发表
已确认购买
I was able to install this light fixture without having to purchase an adapter plate. One of the options for installation--the 2.75 inch span--fit my electrical box. I did have to go out and buy longer screws because the ones provided were 1 inch long and much too short. The LEDs are nicely spaced and the fixture looks good when lit. The only aspect I don't like is the bluish tint of the plastic lens cover: I would have preferred a warmer shade of white.
阅读更多
3 个人发现此评论有用
加入亚马逊Prime，从此免运费
亚马逊Prime会员可享海外购美/英/日/德跨境免邮，全年无限次！更有免费无限次阅读电子书服务
> 立即加入
了解我们
合作信息
帮助中心和购物指南