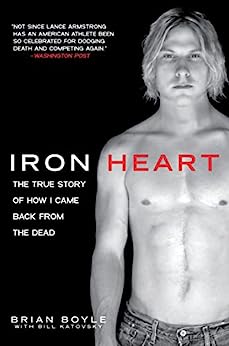 Iron Heart: The True Story of How I Came Back from the Dead (English Edition) Kindle电子书

英语版本 Brian Boyle (作者) 格式: Kindle电子书
|
分享
分享 <分享样章>
广告
显示所有 格式和版本 隐藏其他格式和版本
This young athlete’s memoir of survival after a catastrophic car accident is “a moving, remarkable story of the power of the mind and the body” (Booklist).

In the blink of an eye, Brian Boyle’s life was over—almost.

On July 6, 2004, eighteen-year-old swimmer and bodybuilder Brian Boyle’s car was obliterated when a dump trunk plowed into it. Airlifted to a shock-trauma hospital, he had lost 60 percent of his blood, his heart had moved across his chest, and his organs and pelvis were pulverized. To help him survive, he was put into a medically induced coma for two months.

When Brian finally woke up, he had no memory of the accident. He could see and hear, but not move or talk. Unable to communicate, he heard words like “vegetable” and “nursing home.” If he lived, doctors predicted he might not be able to walk again, and certainly wouldn’t be able to swim. Refusing to endure such an existence, he painstakingly clawed his way back to the living. First blinking his eyelids, then squeezing a hand, then smiling, he gradually emerged from his locked-in state. But his fight was only beginning.

Iron Heart is the moving, inspiring first-person account of Brian Boyle’s ordeal and miraculous comeback. With enormous fortitude he learned to walk, then run, and eventually, to swim again. With a dream of competing in the Ironman Triathlon spurring him on, Brian defied all odds, and three and a half years after his accident, crossed the finish line in Kona, Hawaii.

He wasn’t supposed to survive. Or move, talk, walk, or swim. But Brian Boyle never did what he was supposed to do. Here, Brian’s inspiring journey from coma to Kona is brought to life.
阅读更多
Previous page
Next page
›  查看更多商品促销信息

“It's not what people accumulate in material things that makes a nation great. Greatness comes from the good that free people do for others. On the long road back, Boyle vowed that he would give back.
” (
USA Today )

“A zombie, a permanent nursing-home resident, a man bound to a bed. At least, that may have been Brian Boyle's fate had he accepted the prognosis of his doctors.
” (Men's Health )

Brian Boyle suffered a near fatal car accident when he was eighteen. A former swimmer and bodybuilder, he had become a human skeleton but became determined to compete in the Hawaii Ironman. In October of 2007, he realized his goal and crossed the finish line in Kona. NBC television covered him during the triathlon. In 2008, Men’s Health magazine named Boyle one of its twenty heroes. He’s currently a student at St. Mary’s College in Maryland.

Bill Katovsky, founder of Tri-Athlete Magazine, has completed the Hawaii Ironman twice and is coauthor of Embedded: The Media at War in Iraq, which won Harvard’s Goldsmith Book Prize; and editor of 1,001 Pearls of Runners' Wisdom: Advice and Inspiration for the Open Road, as well as co-founder of the Natural Running Center. --此文字指其他 kindle_edition 版本。

Catherine S. Grygar
5.0 颗星，最多 5 颗星 A Christmas Gift Idea to Inspire a New Year's Resolution!!
2011年12月15日 - 已在美国亚马逊上发表
已确认购买
If you are looking for a great Christmas present for important friends and family in your life I recommend "Iron Heart"!!

This inspiring story on Brian Boyle will certainly motivate them and encourage them to get a move on in their lives and accomplish anything they set out to do - 'anything is possible' - will become something they can believe after reading this moving account. 'Anything is possible' is also the motto of the Ironman Kona Triathlon and that is what he accomplished. What is extraordinary is that Brian should not have survived a horrific car crash. He simply shouldn't have made it, but he did. He had amazing support from his family and physicians and therapists. And he had an amazing inner drive. He recovered and set out on a challenge to accomplish the ultimate endeavor in sport and he became an Ironman!

I first read "Iron Heart" in January of 2011. I had done one triathlon in September 2010 and was pondering my New Year's Resolutions. I was questioning whether there was another, a second, triathlon in my future. So shopping on Amazon I was looking for inspiring sports stories, motivators and topics on Triathlon. This book kept coming up as a suggested title after I would do searches, so I ordered it and waited for its arrival in the mail.

Throughout his book I found myself crying and smiling at the same time. As a mother I cried at the awfulness of the accident and what had happened to his body. There was no way that he should have recovered. I smiled because he did. But he did more. His journey was not easy, but he never stopped. His story never ceased to amaze me. I had to share this wonderful book. I lent my copy to my girlfriend (who now does triathlons with me) and she too found herself inspired. When she returned my copy, I read it again. His story reminds me that I can do whatever I set out to do, that 'anything is possible', and I met and exceeded my own goals I set last January.

This wonderful book should be required reading for collegiate physical education majors, nursing majors and personal coaches. I personally am going to re-read it for the third time this month as we move into the New Year. His story will help me set my mind for my goals for 2012. His story is a spark that bursts through to successful triumph. His story will show you by example that indeed 'ANYTHING IS POSSIBLE'.
阅读更多
14 个人发现此评论有用

It caused me to rethink the issue of "pulling the plug" when someone is on life support. It also made me reconsider how much of our ability to accomplish physical things with our bodies is limited simply by our minds and our will to push more.

It was an easy read, and I found the beginning to be the most interesting. I've never read anyone who was in that situation, writing from the perspective of being stuck in the hospital bed, drifting in and out of consciousness while at the same time having their full mental capacity.

Worth the time... a very encouraging story.
阅读更多
2 个人发现此评论有用

Paul K. Erbes
5.0 颗星，最多 5 颗星 Inspirational, Motivational Page-turner
2009年9月25日 - 已在美国亚马逊上发表
已确认购买
There are 3 reasons why this book should be read by anyone wanting to be inspired or motivated: First, it is incredibly well written; second, the story is nothing short of a miracle; and third, the the central person in the story (the author) is one of those rare individuals that leads you to believe in the phenominal power of the human spirit.

This is not a story of a car accident and the recovery. It is an exploration into the mind of an incredible athlete who draws the reader into experiencing everything the he experienced. The reader feels what is like to come out of a coma and see the blinking of an eye or the slighest smile as huge achievements in communication. And the reader also feels the pain and exhiliration of completeing the swimming, biking and running of an Iron Man Triathlon. The book centers on the person, the struggle and the success rather than on the details of a tragedy.

Miraculous healing, everpresent parental support and intense athletic drive seem to be the formula that led Brian Boyle to not only recover from this horrific accident but to defy medical science and go from a 2 month coma the a 14 hour IronMan triathlon in under 2 1/2 years. Read the book, share it with your friends, give it to someone needing to overcome struggles in their own lives.
阅读更多
15 个人发现此评论有用

Lovee
5.0 颗星，最多 5 颗星 An Amazingly Miraculous Story
2015年7月30日 - 已在美国亚马逊上发表
已确认购买
I read this book, because it was on my daughter's summer reading list. I expected it to be good, because of its description. It blew me away. It should be on everyone's reading list. Signs of Divine Providence are present throughout the book. The resilience of the human spirit is also evident. We are not defined by our limitations. We are children of God.

I gave this book five stars, because it deserves more than five stars. It is well written and gives the reader so much hope. It is divided into three main parts: Heart, Body, and Soul. The first part is real intense for those who have or are experiencing a medical emergency personally or within the family. If you can get through it, you will be greatly rewarded. I recommend this book for everyone, especially those who are told they can never do something. Challenges can be met. Obstacles can be overcome. Goals can be achieved. Dreams can come true. God is in charge.
阅读更多
4 个人发现此评论有用