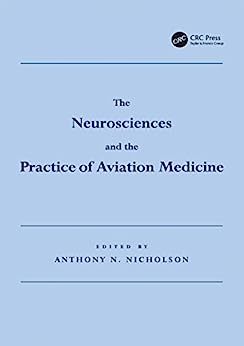 The Neurosciences and the Practice of Aviation Medicine (English Edition) 1第一 版本, Kindle电子书

英语版本 Anthony N. Nicholson (编者) 格式: Kindle电子书
|
分享
分享
广告
显示所有 格式和版本 隐藏其他格式和版本
This book brings the neurosciences to operational and clinical aviation medicine. It is concerned with the physiology and pathology of circadian rhythmicity, orientation, hypotension and hypoxia, and with disorders of the central nervous system relevant to the practice of aviation medicine. The chapters on circadian rhythmicity and orientation deal with the impaired alertness and sleep disturbance associated with desynchrony and with the effects of linear and angular accelerations on spatial awareness. Hypotension and hypoxia cover cerebral function during increased gravitational stress, clinical aspects of exposure to acute hypoxia, the mild hypoxia of the cabin of transport aircraft, adaptation and acclimatization to altitude and decompression at extreme altitudes and in space. Disorders of particular significance to the practice of aviation medicine such as excessive daytime sleepiness, epilepsy, syncope, hypoglycaemia, headache and traumatic brain injury are covered, while neuro-ophthalmology, the vestibular system and hearing also receive detailed attention. The potentially adverse effects of the aviation environment and of disorders of the nervous system are brought together, and the text covers the neurological examination as it relates to aircrew and explores current management and therapeutics. The Neurosciences and the Practice of Aviation Medicine is an essential work for those involved in the practice of aviation medicine where familiarity with the effects of the aviation environment on the nervous system and understanding the pathophysiology of relevant clinical disorders are of prime concern. The authors from leading centres of excellence are physiologists concerned with the aviation environment and physicians involved in the day-to-day practice of medicine. They bring to this authoritative text wide experience and expertise in both the experimental and clinical neurosciences.
阅读更多
›  查看更多商品促销信息