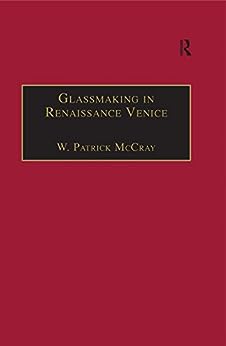 Isola
5.0 颗星，最多 5 颗星 Excellent treatment
2013年7月16日 - 已在美国亚马逊上发表
已确认购买
Excellent and comprehensive treatment of a somewhat obscure but critically important time in the history of Italian glass. There is nothing quite like this in the literature, which has traditionally taken a scholarly but narrow approach to understanding the complex circumstances that gave rise to the Golden Age of Venetian glass. The author provides a cross-disciplinary survey of social, political and economic factors that contributed to rise and success of some of the most innovative and highly-skilled objects ever to be made from this material.
阅读更多

Mary Soon Lee
3.0 颗星，最多 5 颗星 A helpful reference work marred (in the edition I read) by low-quality illustrations and minor errors
2017年6月5日 - 已在美国亚马逊上发表
As the title suggests, this is a book with a narrow focus. I read it for background on Venetian glassmaking, and, as such, it succeeded. It wasn't an especially engaging read, but it was informative, and that was what mattered to me. Although I have three complaints, the book was a helpful reference work.

My most serious complaint is that in the copy I read--the 2016 hardcover Routledge edition--the illustrations were so poorly reproduced that many were rendered worthless. In addition, there were many minor errors that should have been caught by a copyeditor. Lastly, despite not knowing much Venetian history, I knew enough to spot an error in chapter two, when the author stated that "In 1571, the Venetian fleet suffered a defeat to the Turks at the battle of Lepanto." Whereas in fact the Venetians were on the winning side. Hopefully the glassmaking information is more accurate.