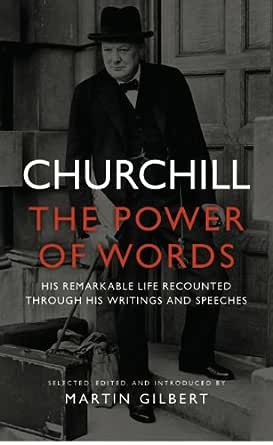 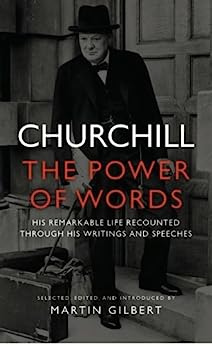 Washington Times, 7/31/12
“What makes this particular volume stand out is the expert’s encyclopedic knowledge about the subject—and his keen eye in choosing the most exceptional works of a man who wrote and spoke so many of them. Mr. Gilbert has long been Churchill’s greatest champion, but he wisely takes a secondary role to simply provide brief thoughts on each excerpt’s historical significance. In doing so, Churchill’s astonishing mastery of the English language can thereby do all the talking…a superb volume of Churchill’s writings and speeches.”

Veterans Reporter, 9/1/12
“[A] masterful book and a history worth buying and reading and paying attention to.”

Buffalo News, 9/30/12
“Churchill’s speeches…sing in a way English language statesmen and politicians have tried unsuccessfully to match ever since. This volume has them all, and in chronological order, often with brief lead-ins to supply context, so it can be read as a history of the British Empire during the first have of the 20th century, or used as an anthology of Churchillian quotations…Kudos to Sir Gilbert for the service he has performed in packing the best of Churchill into one comprehensible volume.”

Sacramento Book Review, October 2012
“Will give the reader great insight into the history of Britain during the time of Churchill and Churchill’s own development into the leader during their ‘finest hour.’ Highly recommended especially in this age of politics over character.”

Winston S. Churchill (1874–1965), was Prime Minister of Britain in war (1940–5) and peace (1951–5). After completing his education at Harrow and the Royal Military Academy, Sandhurst, he spent six years in the army. He served as a Member of Parliament from 1901 until 1963. His published works include memoirs of his childhood and of both world wars, 22 volumes of speeches, 6 volumes of collected published articles, and one novel, Savrola. In 1953 he received the Nobel Prize in Literature. In 1908 he married Clementine Hozier; they had four daughters and one son.

Sir Martin Gilbert, one of Britain’s leading historians, is the author of more than eighty books, including six volumes of the Churchill Biography and eleven volumes of Churchill documents. His other books include Churchill: A Life, The First World War, The Second World War, A History of the Twentieth Century, and twelve historical atlases, including Atlas of the Second World War. He is an Honorary Fellow of Merton College, Oxford. In 2009 he was appointed a Privy Councillor, and a member of the British Government’s Iraq Inquiry.

Sir Martin Gilbert can be contacted on his website: www.martingilbert.com. --此文字指其他 kindle_edition 版本。

PIKU
5.0 颗星，最多 5 颗星 Fascinating read
2012年12月19日 - 已在美国亚马逊上发表
已确认购买
Being an Indian, ever since my childhood I have heard only bad things about this man; and with all honesty almost all of it is true. He was directly responsible for a devastating famine in India during the war. But as I grew up, I understood that the situation was beyond his control. He was leading a war against tyranny and his interests lied in victory of his country. Every human being is flawed and they take wrong decisions and in this case we were in the wrong side.
So I thought of learning a bit about his life and works and purchased this book.
The first good thing is, the organisation of the materials. It's like a journey through the life of Churchill rather than a boring documentary. Every section has an introduction to what follows, to put things in the right context. As you keep reading, you will see a certain new character trait of Churchill which he developed from a certain experience. Churchill's writings are sharp and clean and the author of this book has done a great job in sketching a brief picture of Churchill's life.
The second second is History: I learned a lot about the world the world history by reading this book. Whenever I found anything that I have not heard before, I just went to Wikipedia and learned about that chapter of history.
To cut the long story short, this book tells you a lot about Churchill's life and his journeys. A well read man who had travelled to far corners of the world and had all sorts of experiences. I thoroughly enjoyed this book and learned a lot from it. I would advise the reader to go slowly through the book and use the internet to find more information about any incidents that she/he is not aware of. It might improve your history by a significant amount, at least it did for me.

Paul
5.0 颗星，最多 5 颗星 Another Welcome Book on Churchill
2012年8月2日 - 已在美国亚马逊上发表
已确认购买
Martin Gilbert is the foremost expert on Churchill in the world, beginning his work for Randolph Churchill on the biography in the early 1960s and taking over at Volume III upon Randolph's death in 1968. If there is anyone qualified to do this work,it would certainly be Sir Martin.

It is a good work in one volume and the author presents his choices of WSC's speeches and writings through his years. Of course you can buy multi volume works of his speeches but this book relieves you of the brunt of the weight and provides you the best. While I am familiar with many of his most famous, there are many very interesting parts in here, for example "The Supreme Hour", when Winston had to tell the House of Commons that on July 4, 1940, the French fleet was sunk by His Majesties Ships and 1,297 French sailors were killed. How do you bear and bring this horrible news? England had watched France cave in to the Nazis and now he has to tell the House that the Royal Navy had to sink a large part of the French fleet. This was when England stood alone and things were bleak indeed. The power of his argument and presentation is brilliant and this one I had not come across before. There are others of interest that I won't spoil, but what a master of words he was.

In some ways the book is like a box of fine chocolates. You really don't want to sit down and digest it in one sitting but it makes for a very interesting repast when you have a little time and want to go exploring with WSC again.

Gustavo Coronel
4.0 颗星，最多 5 颗星 Churchill's long and fruitful life
2012年9月15日 - 已在美国亚马逊上发表
已确认购买
This magnificent work by Martin Gilbert shows Churchill's life through his speeches and writings, placed in chronological order, with constant reference to Churchill's age. It is striking to note that his life had long moments of apparent political stagnation, periods in which he was demoted or reduced to playing a subordinate role in England's political affairs. But is also remarkable that he never gave up, never lost his supreme self-confidence. Ever since he was a school boy he seemed certain that he would play a huge role in the history of the nation. At 22 he became famous when he escaped from the hands of the Boers. His descriptions of the River War against the Derviches are very powerful. He would have to wait until he was 65, an age at which most politicians are thinking of retirement, to play his most stellar role as Prime Minister during the II World War. His leadership made a big difference in its outcome. And he did it through the power of his words.President Kennedy said it beautifully: "He mobilised the English language and sent it into battle".
阅读更多
48 个人发现此评论有用

johnkenrick
5.0 颗星，最多 5 颗星 From the Lion's mouth!
2018年8月17日 - 已在美国亚马逊上发表
已确认购买
The full texts of Churchill's speeches -- a treasure for history lovers like me. Fascinating to see how the rhetoric he polished and perfected during World War I pre-echoes the masterful speeches he offered while leading England to victory in World
War II. Nice selection of photos makes a welcome addition. A great read!