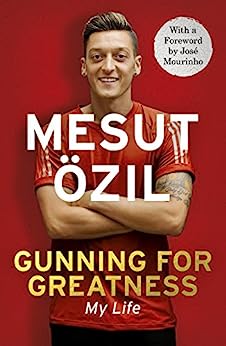 Gunning for Greatness: My Life: With an introduction by Jose Mourinho (English Edition) Kindle电子书

Mesut Ozil is a midfield magician, casting an elegant spell over opponents and conjuring passes through gaps lesser mortals can't even see. After an eventful sojourn among the Galacticos of Real Madrid he has savoured silverware at Arsenal, while in 2014 he lifted the World Cup with Germany.

But his life and career have been a test of resilience. Growing up in Germany's Turkish community, he faced prejudice from those who claimed his dual identity would prevent him giving his all for the national team. Later came questions over a different type of commitment, the kind levelled against those, like Mesut Ozil, who excel in football's finer arts rather than relying simply on running and ruggedness. He has proved concerns on both these issues lack substance.

In Gunning for Greatness, Mesut Ozil reveals the inside stories of his relationships with Jose Mourinho and Arsene Wenger, his quest to help the under-fire Frenchman restore Arsenal's pre-eminence - and how he silenced the sceptics by conquering the world.

Mesut Ozil was born in 1988 to Turkish parents at Gelsenkirchen in what was then West Germany. An attacking midfielder, his professional career began with home-town team Schalke 04 and led him to Werder Bremen and Real Madrid before he joined Arsenal for a club-record £42.5m in 2013. His honours include FA Cup success with Arsenal, a Spanish title with Real and the German Cup at Bremen. A five-time Player of the Year in Germany, he made his debut for the national team aged 20 and was a member of their World Cup-winning side in 2014. --此文字指其他 kindle_edition 版本。

Riedewaan Abrahams
5.0 颗星，最多 5 颗星 Excellent story of true sport values
2017年4月26日 - 已在美国亚马逊上发表
已确认购买
I first saw mesut ozil playing for Germany against Argentina at the Cape Town stadium in fifa 2010 w.c. It was admiration at first sight for me....I told my 20yr old daughter.....watch this player if u want to appreciate classy football
As a Muslim I am also appreciative of his Humility
When he joined arsenal....I rejoiced
The book gives a good story for me to treasure

fishyks
5.0 颗星，最多 5 颗星 Mesut Özil, his story of success
2017年11月4日 - 已在美国亚马逊上发表
已确认购买
This book was a present for my daughter. Mesut Özil is my daughters favorite soccer player. She had been waiting for it to come out in English. It is well written and I liked it too.
阅读更多