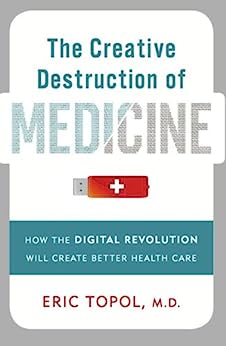 Mobile technology has transformed our lives, and personal genomics is revolutionizing biology. But despite the availability of technologies that can provide wireless, personalized health care at lower cost, the medical community has resisted change. In The Creative Destruction of Medicine, Eric Topol-one of the nation's top physicians-calls for consumer activism to demand innovation and the democratization of medical care. The Creative Destruction of Medicine is the definitive account of the coming disruption of medicine, written by the field's leading voice.
阅读更多
›  查看更多商品促销信息

Eric J. Topol, M.D., is the director of the Scripps Translational Science Institute and co-founder and vice-chairman of the West Wireless Health Institute in La Jolla, California. He is a practicing cardiologist at the Scripps Clinic and a professor of genomics at The Scripps Research Institute. One of the top 10 most cited researchers in medicine, Topol was elected to the Institute of Medicine of the National Academy of Sciences and has led many of the trials that have shaped contemporary treatment for heart disease. --此文字指其他 kindle_edition 版本。

DLU
4.0 颗星，最多 5 颗星 The Creative Destruction of Medicine
2015年8月17日 - 已在美国亚马逊上发表
已确认购买
Given all the havoc that has beset the medical market it is no surprise that Topol has called this a "Creative Destruction of Medicine". The medical system in place from (say) the mid-20th century forward, will not be able to handle the continual flow of retiring baby boomers, let alone senior citizens with ever increasing life expectancies. Like so many promises made over the past years, in its present form medicine will not be able to afford to honor the Medicare entitlement. So the current system must be replaced it with something else that will work.

The only good news is that the cost of medicine can be greatly reduced through the aggressive introduction of advanced cutting-edge technology. Topol provides examples of where the injection of a little technology can substantively improve medicine, and at the same time do so at reduced costs. We might be seeing what others in the past have called "inflection points", where radical improvements and changes lead to measurably better patient outcomes.

Changes on the cusp, are by no means painless. In the future you personally will be unlikely to get nearly as much one-on-one time with your doctor. Instead you will be seen by other medical professionals like physician assistants, nurse practitioners, and technologists of all stripes . In writing this, I remember the days when my dentist actually cleaned my teeth (!). Now a hygienist tends to that, with the dentist stopping by to take a quick look and shake hands.

It would seem the dentists got to the answer faster than medical doctors were able to:

Delegate anything and everything you can to less expensive staff so you can see more patients and reap the rewards of an expanded practice.
阅读更多
5 个人发现此评论有用

discerning consumer
5.0 颗星，最多 5 颗星 absolutely wonderful look at medicine as it IS and as it should/could be
2012年4月5日 - 已在美国亚马逊上发表
已确认购买
This book is a must for ANYONE who will ever be part of the health care system (as a provider or recipient of health care). Dr. Topol has written this book for the empowered consumer but as a physician who spent a career focusing on quality of care, I found it enlightening and fascinating. Dr. Topol takes us from the population based/guideline based medicine of today (WHEN we are lucky enough to have enough population based evidence for guidelines) to the individualized medicine of the not too distant future and explains how genomics and digitalization will make that possible. There are so many useful aspects to this book including a discussion of how to interpret the literature, how to evaluate the internet as a resource, how to select a top notch doctor and what kinds of conditions that is important for and so much more. Just to find about the MIT OpenCourseWare was worth the price of the book. This book is a major contribution from a doc who has been one of the major contributors to health care in this country. It was recommended to me by a cardiologist friend and I have recommended it to everyone from doc friends to musician friends. Lots of important content written with great clarity in a personal, almost conversational style that makes it a pleasure to read.
阅读更多
3 个人发现此评论有用

Dennis L. Hamilton
5.0 颗星，最多 5 颗星 A True Revolution in Health Care
2013年6月28日 - 已在美国亚马逊上发表
已确认购买
It is impossible to overstate the importance of Dr. Eric Topol's book and his message. While the text is sometimes more technical than the average reader might be at ease with, the message that health care is endangered is vital to everyone. Politicians have refused to deal honestly with the health care lobby, the biggest and most powerful lobby in America, because its money means votes. As the Baby Boomers retire at the rate of 10,000 a day between now and 2019, the debt of health care -- already a $2.8 trillion monster -- is absolutely going to spiral out of control because nothing was done. My children, and their children, will be pinned under this financial burden their entire lives.

Topol has reformative ideas and is busy employing them with real patients. His work in wireless medicine, where multimillion-dollar medical devices have been been reduced in size and expense -- some to the size of a smartphone -- could not only save billions every year in hospital charges, but re-establish the patient-physician relationship that has been lost.

Dr. Topol's ideas need to be heard by everyone because the patient of tomorrow will have to be conversant in health care, lest they become one of the 50 percent of bankruptcy filers who do so because of medical bills.
阅读更多
3 个人发现此评论有用

Doug Wallace
4.0 颗星，最多 5 颗星 Destruction of medical practice as we know it -- MAYBE
2014年3月9日 - 已在美国亚马逊上发表
已确认购买
Dr. Topol makes the case that the combination of digital technologies and genomic sequencing will "destroy" medicine, or I would suggest, "Medical practice as we now know it." The volume is a well written volume that is heavy on genes and their possible utility in diagnosis and treatment; recent advances in digital imaging, processing, and storage are given their due as well. What is missing, in my view, is any extended treatment of the fact that a totally "digitized individual" is still a psychological behavioral entity. That this is the case is implied when the author acknowledges the perennial problem of "patient compliance." Unless an individual is experiencing a chronic condition (or even one that might be time limited) there may not be a motivated interest to pay any attention to sensor derived data which may (or may not) be of a personally health related nature. Considerable consumer education will be required if Dr. Topol's vision is to become manifest.
阅读更多
1 个人发现此评论有用