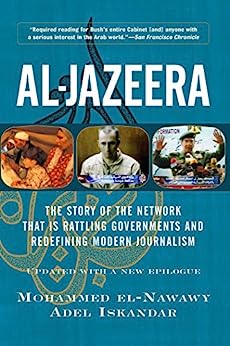 Al-jazeera: The Story Of The Network That Is Rattling Governments And Redefining Modern Journalism Updated With (English Edition) Kindle电子书

英语版本 Mohammed El-nawawy (作者), Adel Iskandar (作者) 格式: Kindle电子书
|
分享
分享 <分享样章>
广告
显示所有 格式和版本 隐藏其他格式和版本
Al-Jazeera, the independent, all-Arab television news network based in Qatar, emerged as ambassador to the Arab world in the events following September 11, 2001. Arabic for "the peninsula," Al-Jazeera has "scooped" the western media conglomerates many times. With its exclusive access to Osama Bin Laden and members of the Taliban, its reputation has been burnishing quickly through its exposure on CNN, even as it strives to maintain its independence as an international free press news network. Al-Jazeera sheds light on the background of the network: how it operates, the programs it broadcasts, its effects on Arab viewers, the reactions of the West and Arab states, the implications for the future of news broadcasting in the Middle East, and its struggle for a free press and public opinion in the Arab world.
阅读更多
Previous page
Next page
›  查看更多商品促销信息

"...a timely book, which places the emergence of the satellite channel into proper perspective in a lucid and lively style." -- The Muslim World Book Review

"...a valuable guide to the 21st-century Arab political psyche." --
The Jerusalem Post

"A great work of pain-staking research, beautifully written on one of the major (not "minor") television channels of this century." -- The Pioneer

"A valuable guide for the perplexed to the 21st-century Arab political psyche." -- The Sunday Telegraph

"Lively, with a telling eye for detail, due in large part to the insider access the authors seem to enjoy." -- Cincinnati Inquirer

"Provides an unbiased account of the network's history and how it is viewed in both hemispheres." -- The National Journal

"Provides timely and much-needed background on Al-Jazeera." -- The Village Voice

"This book is a great leap forward toward understanding the impact of a major opinion-maker on the world scene." -- Publishers Weekly --此文字指其他 kindle_edition 版本。

Mohammed el-Nawawy, Egyptian born and raised, has worked as a journalist in the Middle East and the U.S. His experience includes working for the Associated Press in Cairo, the Middle East News agency and the Baltimore Sun. El-Nawawy has a Ph.D. in journalism and is professor of journalism at the University of West Florida. Adel Iskander, an Egyptian-Canadian, is an expert on Middle East media. He has conducted studies on viewership of Arab media and the use of North American media by Arab immigrants. He has lived in Kuwait and in Egypt for many years, and currently teaches communication at the University of Kentucky, Lexington, Kentucky. --此文字指其他 kindle_edition 版本。

Melinda McAdams
5.0 颗星，最多 5 颗星 Very readable and informative
2006年8月23日 - 已在美国亚马逊上发表
已确认购买
I've reread parts of this book several times and assigned it to U.S. college students too. If the Al-Jazeera TV network is influential, shouldn't we want to learn more about it? It's narrow-minded to think that all Arab people think it's a great network -- they don't. And it's a matter of ignorance to think that the network as a whole approves of everything that every Arab person does, good or bad.

By reading this book, you'll find out how the network was set up, how it was funded, where it is based, who its journalists are, what programming it broadcasts (it's more than only news -- just like the BBC), and what Arabs say against it -- as well as what Westerners and non-Arabs criticize about its programming and its decisions.

For example, does Al-Jazeera go soft on Qatar because of its primary funding source? Another example: Do some Arabs think that Al-Jazeera is really a pawn of Western governments because it broadcasts interviews with Israeli officials? The book addresses these questions and more.
阅读更多
8 个人发现此评论有用

Andrea S.
5.0 颗星，最多 5 颗星 Marvelous book
2013年1月25日 - 已在美国亚马逊上发表
已确认购买
The book is marvelous! i could not put it down once i started reading. The authors give the background history of Al Jazeera, from its beginning in 1996 up until the early 2000s, dissecting its ownership, its struggles to gain a foothold in the media world, and its journey as an entity to become the leading news voice for the Arab world. The authors discuss Al Jazeera's importance to Arabs the world over in terms of providing news coverage that is independent of any government's censors. The book is exceedingly well-written, an absolute delight.

With the increasing prominence of Al Jazeera as THE leading news source (yes, that is my opinion but nobody -- and i mean NOBODY -- reports the news better), i wish that the authors would update this book, and include AJ's growing role as a reliable media source, and also the role AJ has played (and will continue to play) in the Arab revolutions. i highly recommend this book to anyone with an interest in media, the Middle East, truth and justice.
阅读更多
1 个人发现此评论有用

Adam Daniel Mezei
3.0 颗星，最多 5 颗星 Can an Arab writer pen anything about Al-Jazeera and still claim to be objective?
2007年2月26日 - 已在美国亚马逊上发表
Yeah I know, incendiary title...but it certainly *does* get you reading my review, eh?

Frankly, I don't believe the word "objective" even comes into play when describing the push/pull affairs of the contentious Levant. It's amusing to observe the legions of Westerners and Europeans who have often never (or once) set foot in the region, willy-nilly casting opinions on the internal affairs of the countries of the region. They don't reside in these countries, and aren't compelled to live the day to day controversies. It beggars the question if they've even got the right to cast an opinion.

I know, I know, I realize there are going to be hundreds of people who claim that the now-globalized effects of terrorism have changed the rules of the game. Ever since terrorists began to take their road show international, there will always be those who claim that because of the aftereffects they suffer far from the MidEast, that they've got a say.

Of course, the cat's already out of the bag and that past-his-prime Jaysus-lovin' Jimmy C. seems to think that it's his God-appointed duty to inform every last one of us (the uninformed "us," in other words) about the "apartheid" (quotes intentional) in effect in the Land of Israel. Like I've said in other places and in other Reviews, who in that same deity's name appointed the former President spokesperon for the so-called Palestinian Arabs?

Anyways, compared to Hugh Miles book of a similar title, I'm less than inclined to go along with the musings of these two otherwise highly competent scribes and academics. Miles, I believe it can be said, might have had a bit of the old Jack Philby-esque Arabism nestled deep within his ticker. Though he still managed to pull off a nice piece of work in his overview of the Qatari news sensation. If you don't know what I'm talking about, do an Amazon search for "Al Jazeera, Miles" in the search field, and feast your eyes on some nice reviews.

In the case of El-Nawawy and his Canadian cohort Iskandar, howver, the proverbial jury is still out as to what their agenda might be. I don't know these guys, and they haven't proven their bona fides to me enough for me to go "objective" on 'em. Yeah, yeah, I even heard them over a couple of podcasts, casting stones and trading jibes with Miles and the podcast's host. They can talk a mean stick, that's for sure...but I dunno...

Am I profiling and being potentially libellous and prejudicial vis-a-vis these two authors?

The two aforementioned authors of the present book certainly had to expect the sort of accusation I (and a host of others, I'm sure) am now levelling against them--par for the course, considering who's writing this book (read: check out the surnames and admitted [in the authors' own words] pedigrees, folks). Two gentlemen of clear Arabic heritage. Where do their sympathies lie, I want to know?

On the one had, you've got a relatively decent and objective overview of how Al-Jazeera functions. They go into the who's-who of who's paying the bills (the Qatari royal family, the emir in other words), where the bulk of its employees hail from (the former BBC Arab channel), and examples of the incendiary sorts of programming which are to be found on its airwaves.

On the other hand, the authors hint at where their loyalties lie. Their clear use of controversial terminologies in reference to certain parcels of land in the Middle East and peoples, and what's more, their lack of a clear-cut censure of some of the more repressive policies of the Qatari government (regime), for example, and bestowing heapful praise upon the sometimes brazeness of Al-Jazeera is a bit akin to being taken on a roller-coaster ride. Where should I stand as a reader? How should I feel about Qatar, as a nation and a culture, when the authors themselves place it on a pedestal in diametric opposition to this bastion of free speech, this Arab "phenomenon" known as the first "free" and "fair" media channel in the Middle East and the Gulf? After completing the book, I'm not sure what to believe anymore.

That makes two books now that I've read on the channel, and believe me I'm going to be on the lookout for the equalizer (three times lucky?). My hunch is that someone who doesn't have clear and declared Arabist leanings or tendencies isn't going to get a near shot at the contacts that Miles and present scribes did (not to mention Jehane Noujaim's CONTROL ROOM (2004), and the unbelievable access which she had). An Israeli journalist, or a any other Jewish journalist who isn't in an ambiguous no man's land such as Al Jazeera English anchorman Dave Marash appears to be on the surface, wouldn't have this kind of access. Believe me, they wouldn't! Putting a few token Israelis or Israeli government spokespeople on the Al Jazeera airwaves is a dubious exercise, at best. While it might seem to the rest of the TV-viewing world as if this is some sort of "fair treatment" approach--this side, and the other side, as the slogan goes--I still am not convinced that this is nothing more than window dressing.

Worth a read, but them thar's an agenda afoot here, folks. Just go at it with an open mind, and try not to be too heavily swayed.

S. Jamal
5.0 颗星，最多 5 颗星 Fair and well-researched
2005年3月28日 - 已在美国亚马逊上发表
This books heaps a lot of praise on the network, but is also critical of it (as an example the author discusses Al Jazeera's lack of coverage of Qatar-Bahrain tensions). You get a view from inside and outside the network, a look at it's founding and how the networks covers issues differently than Canadian and American news organizations.

One reason in particular for reading this book is that you will get to see a side of the network that you wouldn't normally see in North America. I say this because Al Jazeera is much maligned in these parts. Consider that the CRTC (Canada's FCC) has placed unreasonably strict conditions on cable companies who wish to carry the Al Jazeera news channel- no other news network is subject to such ridiculous treatment. The fear seems to be that Al Jazeera inspires hate and incites violence. Contrast this with the easy approval, without such restrictions, that FOX news received to broadcast here. If you don't feel outraged at the CRTC's hypocrisy, then you really should read this book (and at least a few others).
阅读更多
14 个人发现此评论有用