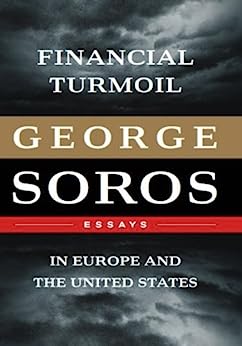 英语版本 George Soros (作者) 格式: Kindle电子书
|
分享
分享 <分享样章>
广告
显示所有 格式和版本 隐藏其他格式和版本
The dire economic situation we find ourselves in is not a result of economic forces alone, but of the policies pursued, and not pursued, by world leaders. In this collection of his recent writings on the global financial situation, George Soros presents his views and analysis of key economic policy choices leading up to, during, and following the financial crisis of 2008-2009.Soros explores domestic and international policy choices like how to manage the (then) potential implosion of Fannie Mae & Freddie Mac, deploying measures to stem global contagion from the sub-prime crisis, alternative options on bailing out lesser developed countries and why this was vital, the structural problems of European economic management, and more.

Financial Turmoil in Europe and the United States elegantly distills the choices at hand, and takes the reader on a journey of real time economic policy work and experimentation.
阅读更多
›  查看更多商品促销信息

Baraniecki Mark Stuart
5.0 颗星，最多 5 颗星 Practical solutions to the Credit Crisis.
2012年2月26日 - 已在美国亚马逊上发表
已确认购买
This excellent book is a collection of newspaper and magazine articles written by George Soros between 2008 and 2011 in which he covers the stock market crash of 2008, financial reform, the worldwide credit crisis and the Eurozone crisis of 2011.

There are now plenty of books about the credit crisis but they mostly explain what happened without giving much of an indication of how to find a way out. As of this writing (Feb. 2012) we are still in the thick of it and Soros' articles are usefully light on apportioning blame (we already know who did it) with the majority of the text dedicated to finding realistic solutions.

He sees the root of the problem in assets that were previously seen as riskless, but which are now, on the contrary, perceived as full of risk or maybe even worthless (e.g. AAA Sub Prime or Greek government bonds) and he goes directly to the point in suggesting that banks should keep their non-performing assets (it was their mistake after all) and receive large equity injections to keep them afloat and in the business of lending.
He accepts that this would be costly and he also sees a very important role for government in a) stopping the inflation of bubbles by controlling leverage and insisting on transparency b) banning outright credit default swaps that he sees as only serving to allow the completely dangerous unlimited shorting of bonds.

The sovereign debt/ Euro crisis is presented as needing serious and effective central financial control in the form of a European Treasury with the right to tax and control spending, although he recognizes the many political hurdles that need to be crossed to reach the finishing line of a safe Euro and responsible government budgets.

Soros bases his analysis throughout on a "reflexive" view of economic affairs in which positive or negative feedback cycles frequently distort supposedly "efficient " markets. He notes that investment/ speculation in new technology often shows reflexive distortions in the use of capital but he doesn't consider that reflexivity itself could be a natural mechanism that has evolved to ensure that every new niche is fully exploited. For example, in the relatively recent computing/internet boom, a great deal of capital was wasted but no one would dispute that it aided the eventual winners (e.g. Intel, Microsoft, Amazon or Google) to raise capital when they needed it.

Edoardo Angeloni
3.0 颗星，最多 5 颗星 Soros has a strong vision about economics.
2012年6月25日 - 已在美国亚马逊上发表
已确认购买
Soros proposes other time his vision related the misconceptions those often occur in the economic context.
But the interesting idea is that just those variations from the rules generate the feed-back what is able to resolve similar situations.
This theory talks about the fact that the errors, if they don't be too big, produce the limits for the knowledge itself.
But if we want research other types of solution to the crisis of 2008, we find many data and many interpretations, but we find also a big confusion about the methods those we should follow for exit from this crisis.
阅读更多

Amazon Customer
2.0 颗星，最多 5 颗星 Great boringly Redundant Ideas
2012年12月17日 - 已在美国亚马逊上发表
已确认购买
This collection had some great ideas many of which were repeated over and over in this collection of essays. When one pulls together a collection of his editorials during the unfolding of an event into a book I guess the reader must expect some repetition of ideas. But it did get to be a little wearisome.
阅读更多

michael troy
5.0 颗星，最多 5 颗星 Prophetic
2013年5月18日 - 已在美国亚马逊上发表
已确认购买
The brilliant George Soros is right on the mark a couple years ahead of the events. Europe is collapsing and the one percent really want that collapse. Soros is the guy with the sign walking the streets saying the "End of the World" Repent austerity sinners and look to Saint Keynes.
阅读更多
3 个人发现此评论有用