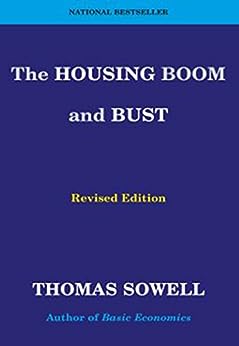 英语版本 Thomas Sowell (作者) 格式: Kindle电子书
|
分享
分享 <分享样章>
广告
显示所有 格式和版本 隐藏其他格式和版本
This is a plain-English explanation of how we got into the current economic disaster that developed out of the economics and politics of the housing boom and bust. The "creative" financing of home mortgages and the even more "creative" marketing of financial securities based on American mortgages to countries around the world, are part of the story of how a financial house of cards was built up -- and then suddenly collapsed.

The politics behind all this is another story full of strange twists. No punches are pulled when discussing politicians of either party, the financial dangers they created, or the distractions they created later to escape their own responsibility for what happened when the financial house of cards in the financial markets collapsed.

What to do, now that we are in the midst of an economic disaster, is yet another story -- one whose ending we do not yet know, but one whose outlines and implications are explored to reveal some surprising and sobering lessons.
阅读更多
›  查看更多商品促销信息

American Spectator
“An economic primer on the housing bubble, but more importantly, it is an examination of the ruling class's inability to leave well enough alone.”


The Washington Times
“For anyone looking for a straightforward and honest discussion of the origins of our current crisis, informed by a deep understanding of both economics and politics, The Housing Boom and Bust is required reading.”

Thomas Sowell has taught economics at Cornell, UCLA, Amherst and other academic institutions, and his Basic Economics has been translated into six languages. He is currently a scholar in residence at the Hoover Institution, Stanford University. He has published in both academic journals in such popular media as the Wall Street Journal, Forbes magazine and Fortune, and writes a syndicated column that appears in newspapers across the country. --此文字指其他 kindle_edition 版本。

Stijn Debrouwere
3.0 颗星，最多 5 颗星 Dubious statistics and non sequiturs
2021年4月17日 - 已在美国亚马逊上发表
已确认购买
As my fellow three-star reviewers have pointed out, it's definitely not a bad book and does a great job to explain the havoc caused by cheap credit and the financialization of debt. However, some of the arguments are rather cringeworthy.

As evidence for his aversion to zoning (which I actually agree with), he points out that 23 out of 26 of the most expensive housing markets have strong zoning, and does not seem to realize that in itself this is incredibly weak evidence: almost all housing markets have strong zoning laws nowadays, and many of them do just fine. To point out why zoning is useless, he points out that "only 10 percent of the land area of the United States has been developed" and seems to imply that a demand for green spaces near our homes or the wish to preserve historical buildings is completely irrational.

He blames cheap credit for a lot of the housing bubble (which again I agree with), but weirdly singles out relaxed downpayment requirements, as if the pre-boom 20% downpayment in the US was based on some sort of universal law rather than custom.

He rails against the idea of affordable housing as a kind of political doublespeak, because true affordable housing is simply the kind of housing you can afford, and if that's a single room for you and your kids in a shared flat, so be it.

And by the way, racism in the housing market probably does not exist, because if it did, how do you explain that so many black mortgage applications are in fact approved? I'm not joking, this is the argument Sowell makes.

To bolster his case against government intervention (did I mention yet that I mostly agree with him?) he references a study that shows that housing costs have been highest when government intervention is greatest, and either it does not occur to him or he wilfully ignores that the causal arrow can run both ways: when the housing market is out of whack, pressure on governments to intervene is highest.

There's good alongside the bad and I definitely feel like I've learned a lot about the housing market, but reader beware.
阅读更多
4 个人发现此评论有用

Roman
5.0 颗星，最多 5 颗星 Exceeded Expectations (Should Have Known Better)
2022年4月14日 - 已在美国亚马逊上发表
已确认购买
This is one of the only Sowell works that I never got around to reading and I’m glad I finally did. It is definitely one of his most “underrated” books and has become one of my favorites - and another important work of his, as they all are. The negative comments here are quite laughable, and I thought I would address these negative comments as they could potentially mislead or deter future readers. Before I continue, I would like to make it clear that I'm not trying to offend, but simply intend to set the record straight. The top negative reviewer stated that Sowell never takes into account inflation when discussing the housing market. This is not true - apparently this book managed to reach well beyond economists or people with fundamental economic understanding and into the hands of many with no fundamental economic understanding whatever, because they do not seem to understand what “real terms” or "real income" means. Not only that, but Sowell explicitly uses the word “inflation” and “deflation” on multiple occasions and takes time periods and specific locations into consideration, compounded by the cost of the house as a ratio of the buyer’s income, not to mention a section dedicated to inflation on p. 86. Also, the fact that many negative reviewers seem to think it is absurd that restrictive land use and zoning laws don’t greatly influence the housing market? There is a massive difference between the level of zoning and restrictive land use laws in say, San Fransisco (or bay area in general) compared to Houston, which greatly impacts the market. If one studies urban economics or urban planning/development this is basic knowledge.

It’s almost as if many people did not even read this book - either that or only read several pages and then set it down. I’ve noticed that those individuals seem unwilling to face facts, properly used statistics and empirical evidence when there is a trending “controversial” current event, and instead fall hard for political spin that satisfies their emotions. Much of what they find “controversial” regarding the economics of housing or even health care, shouldn’t be anymore “controversial” than other necessities such as clothing, food and water. Serious economic analysis is not a matter of opinion, and many of the same fundamental economic laws apply to these other resources that have alternative uses as well.

That aside, this is an excellent analysis of not only the events leading to the “housing bust” of the late 2000s, but a great lesson on both the economics and politics of housing in general. This includes the incentives and constraints in which both private and public financial institutions operate, and how certain hybrid (private/public) federal financial regulatory agencies such as the HUD, FHA, CRA, Fannie Mae, Freddie Mac and Federal Reserve System are dangerous because they enable corruption known as “crony capitalism”, which essentially commits legalized extortion at the expense of private sector banks and finance & loan businesses, lining the pockets of special interests, corrupt politicians and the regulatory agencies themselves. The final chapter takes a look at how the New Deal of the 1930s is virtually a repeat of what happened in the late 2000s/early 2010s under the final months of the Bush administration and into the Obama administration, and how some of the regulatory agencies put into play during the New Deal era have allowed those with a vision for more government intervention to expand their powers by altering - or “reforming ” - the fabric of American society, once given the opportunity. Highly recommend.
阅读更多
1 个人发现此评论有用

Joe Schmuckatelli
5.0 颗星，最多 5 颗星 What REALLY caused the housing bust
2019年12月30日 - 已在美国亚马逊上发表
已确认购买
This is an awesome, information-packed, fast read. It clearly explains all the different factors involved in causing the both the housing bubble AND the bust. As always, something that big is never caused by a single thing. There were many small factors involved - but they all boiled down to inappropriate and/or ineffective government meddling in the housing market to artificially make homes more affordable than than should be. If you want to know what really caused the real estate crash of 2008 (and become a student of history), read this book!
阅读更多
5 个人发现此评论有用