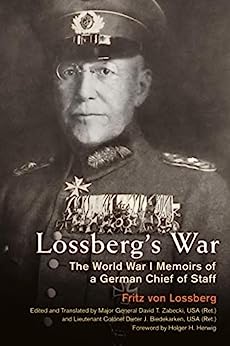 'General der Infanterie Fritz von Lossberg (1868-1942) was perhaps the ablest staff officer in the German Army during the Great War, becoming chief-of-staff of an army while still a colonel, and going on to head the staffs of several armies and army groups. His 1939 memoir of the war, translated into English for the first time by American soldier-scholars Zabecki and Biedekarken, who have added notes and commentary, throws considerable light on the workings of the general staff during the war, while telling Germany’s side of the battles in which he played a role – among them the Frontiers, the Aisne, the Somme, Verdun, Arras, Passchendaele, and on to the Armistice. Lossberg developed many new tactics that made him a master of defensive warfare. As he discusses these actions, Lossberg gives us insights into some of the more unusual aspects of the German staff system, from the power staff officers could exercise over more senior commanders under certain circumstances to the remarkable frankness with which they would communicate with their superiors. He often includes blunt commentary on many senior officers, Germany’s allies and enemies, and the overall conduct of the war. This is an essential work for anyone seriously studying military operations during World War I or for those interested in the Germany Army and staff system.'

For the full review, see StrategPage.