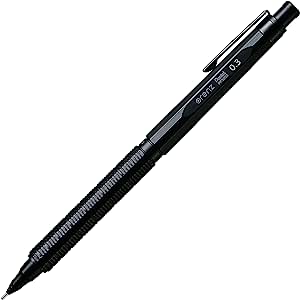 Jobine Bernous
5.0 颗星，最多 5 颗星 Absolutely Amazing Mechanical Pencil!
2019年9月14日 - 已在美国亚马逊上发表
尺寸: 0.3mm已确认购买
I ordered this Orenz 0.3mm to compliment my other 0.2mm and 0.3mm versions that I had (the cheaper normal ones). This is by far one of the highest quality mechanical pencils I have ever used. The sleeve protection for the lead is magnificent, and I haven't had the lead break on me even a single time. The pencil has an amazingly sleek and smooth finish, making this a delight to write with. The dodecahedral design of the grip is odd, but provides surprisingly strong grip and decent comfort. Definitely worth it.
阅读更多
6 个人发现此评论有用

panda-king
4.0 颗星，最多 5 颗星 Nice look and feel, but not for me
2021年1月20日 - 已在美国亚马逊上发表
尺寸: 0.3mm已确认购买
I ordered both the Orenznero and Kurutoga Advance in 0.3 mm at the same time to compare the two. I found that the while the Orenznero looks and feels more premium, it doesn't actually function better for me.

As far as prevent lead breakage, both pencils do a pretty similar job. The Orenznero has a sliding pipe meant to be used with the lead flush to the pipe. This transfers the force to the pipe and pencil body, thereby preventing lead breakage. This works quite well. The thing is, the Kurutoga Advance also has a sliding pipe. While it does not function with the lead flush to the pipe like the Orenznero, you can have it peaking just past and it without issue. This can be achieved by either careful advancement of the lead just past the end of the pipe, or you can get the lead flush to the pipe, and the pipe will slide back slightly once you start writing. I found that with the small amount of lead exposed, I had to intentionally press much harder than I would while writing to break the lead.

I also found that there were downsides to the positioning of the lead with the Orenznero's intended operation. I tended to get lighter markings from the lead, and small indentations from the pipe on either side of the lead. The writing experience was actually smoother for me than a traditional pencil, but I didn't care for it. It felt less precise, since I was getting less tactile feedback from the paper, but I don't think this had an actual effect on the quality of my penmanship. It's worth noting that I write with a fairly shallow angle, so that may have been part of the issue.

Beyond that, both pencils have a notable feature that the other does not.

The Orenznero has an automatic advance mechanism, so you only have to click when you exhaust a piece of lead. I didn't write enough to take advantage of this, but I found that the simple sliding pipe on the Kurutoga gave me plenty of writing time between clicks. The way the Kurutoga works for this will slightly change the length of the pencil past your grip. However, I didn't find I noticed this at all while writing, since the change is gradual.

The Kurutoga has the famous Kurutoga Engine, which rotates the lead to prevent forming a chisel tip. While this is not a perfect mechanism, it does work most of the time, and I did notice a real, positive difference.

The one advantage I would say the Orenznero has is in the grip. It has a textured grip made from an iron/resin composite that packed with enough iron to magnetic. The Kurutoga has a smooth, plastic one with slight indentations. I didn't actually have any grip issues with the Kurutoga, but the Orenznero definitely feels nicer. At least at first. Personally, I found that the slightly thinner grip of the Orenznero was less comfortable over time. Even the Kurutoga was too thin for longer sessions, so I slide a rubber pencil grip I've had for over a decade over the stock one. This configuration certainly won't win on aesthetics, but it's gripper and more comfortable than either pencil is stock.

First of all, let me say that the grip is one of the best Ike ever used, very comfortable. The weight is good and the look is superb.

My only complaints are, the clip is small and feels fragile, I like the original Pentel P-200 clips best.

My other thing is, you have to hold it perpendicular to get the benefits of it’s great mechanism.

After a time of adjustment, it will be a great edc pencil
阅读更多

First of all, let me say that the grip is one of the best Ike ever used, very comfortable. The weight is good and the look is superb.

My only complaints are, the clip is small and feels fragile, I like the original Pentel P-200 clips best.

My other thing is, you have to hold it perpendicular to get the benefits of it’s great mechanism.

After a time of adjustment, it will be a great edc pencil

amazoncustomer
4.0 颗星，最多 5 颗星 great for writing bad for art
2021年3月2日 - 已在美国亚马逊上发表
尺寸: 0.3mm已确认购买
would be great for writeing and takeing small notes , very bad for drawing unless you draw 100% upright all the time the lead snap over and over . went though half a tube of leads before i decided to send it back , it seems like the pipe around the lead will cut into it on any angle other then 90 deg from the table , breaking the lead quickly after its been weakened . in all other respects its well enginered , fits nicely in the hand good weight and materials .

skip it if drawing anything other then schematics .
阅读更多

Mike
5.0 颗星，最多 5 颗星 Automatic! 0.3mm,no problem
2020年11月21日 - 已在美国亚马逊上发表
尺寸: 0.3mm已确认购买
Wow! This is the coolest, best pencil I've ever used! I wish they made a softer lead than 2b for 0.3mm. I really enjoy it, it's different in that you've got to not write too for horizontal or low.
It really is wonderful, you wont regret it! Substantial in weight but not too heavy. Slightly weighted towards the tip. I've never had a 0.3mm before and I love it. The pencil I've been looking for... I hope it lasts! If it doesn't, I will immediately update my review.
阅读更多
加入亚马逊Prime，从此免运费
亚马逊Prime会员可享海外购美/英/日/德跨境免邮，全年无限次！更有免费无限次阅读电子书服务
> 立即加入
了解我们
合作信息
帮助中心和购物指南