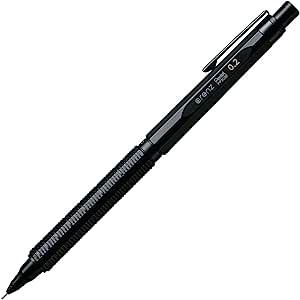 Joe D.
5.0 颗星，最多 5 颗星 One of the best mechanical pencils I've used in decades.
2020年2月14日 - 已在美国亚马逊上发表
样式名称: 单品已确认购买
I was very skeptical of this pencil at first. The idea of NOT advancing the lead beyond the end of the lead pipe just felt like such an unnatural idea to me. I was expecting the metal end to scratch against the paper, or maybe be too far forward and not actually let the lead touch the paper. But after spending a few hours drawing with it (the picture I included), I'm completely sold on this thing.

The metal pipe tip is far more sensitive, and retracts out of the way for the lead itself much better than I expected. In essence, you ARE writing with just the tip of the lead, as if it were extended beyond the tip. It's the fact that it slides back so effortlessly, and so smoothly, that you really don't even notice it's there. Combine that with the auto lead advance system, that will push out just enough lead to match how much you just used every time, and I honestly never had to manually advance it even once.

Also, build quality is excellent. The body is a metal infused plastic, that feels premium in a way I've never really felt before. Not as heavy as solid steel, but not as lightweight as plastic. It's a great balance, and feels perfect to handle. I also never had a single lead breakage, so I can attest to the fact that it does work fully as intended.

E. Sinn
5.0 颗星，最多 5 颗星 Scratchy in the beginning but it can be fixed
2020年9月18日 - 已在美国亚马逊上发表
样式名称: 单品已确认购买
I had another 0.2 mm pencil first. Then I got this version which is the subject of this review.
This auto-advance pencil has a spring that constantly pushes out the sleeve and the lead. This constant pushing makes it somewhat scratchy. Not having to click to advance is a great feature.
I solved the problem by using B lead or 2B lead. Because the lead is softer, you don't have to use so much pressure. The reduced pressure reduced the scratchiness. Also, the scratchiness decreases with use. The people who use 0.2 lead pencils are not heavy-handed writers anyway - so I don't see it as a disadvantage.
I suggest the 0.2 mm version instead of the 0.3 mm version. The 0.2 lead is the type that needs advance more often so auto-advance really helps. I hardly advance my 0.7 mm pencil - the lead lasts a long time there and so there is less use for an auto-advance feature.

Jobine Bernous
5.0 颗星，最多 5 颗星 Absolutely Amazing Mechanical Pencil!
2019年9月14日 - 已在美国亚马逊上发表
已确认购买
I ordered this Orenz 0.3mm to compliment my other 0.2mm and 0.3mm versions that I had (the cheaper normal ones). This is by far one of the highest quality mechanical pencils I have ever used. The sleeve protection for the lead is magnificent, and I haven't had the lead break on me even a single time. The pencil has an amazingly sleek and smooth finish, making this a delight to write with. The dodecahedral design of the grip is odd, but provides surprisingly strong grip and decent comfort. Definitely worth it.
阅读更多
6 个人发现此评论有用

C L
5.0 颗星，最多 5 颗星 Really high quality pencil; never have to click again!
2020年8月11日 - 已在美国亚马逊上发表
已确认购买
As others have mentioned, this pencil feels really high quality. It's weighted nicely. It automatically advances the lead, just barely past the metal tip, so the lead also doesn't break. Not having to ever think about advancing the lead, and being able to just grab the pencil and start writing with confidence, is pretty cool.

I think the price was worth it for the sake of experiencing the novelty of this invention, but maybe don't buy it expecting it to be the "ultimate pencil".

For one, the body of the pencil is a bit rigid-feeling, so it's not the most comfortable pencil to use. Also, the lead is on the lighter side, which makes it harder to see sometimes, so I may try to switch it out for a darker color lead.
阅读更多
1 个人发现此评论有用

frair
5.0 颗星，最多 5 颗星 Thin lead that doesn't break and you never have to click
2020年3月2日 - 已在美国亚马逊上发表
样式名称: 单品已确认购买
I really like this pencil. I got some 2B lead and it's smooth. I like this more than the Kuru pencils because I don't have to click it to advance the lead and the sleeve protects the thin lead and it's not as wobbly (not as much give).
You can push it down on a hard surface with the button pushed to retract the sleeve to protect the sleeve and your pocket. It also feels good in the hand and the clip is high enough not to touch my hand.
阅读更多
2 个人发现此评论有用
加入亚马逊Prime，从此免运费
亚马逊Prime会员可享海外购美/英/日/德跨境免邮，全年无限次！更有免费无限次阅读电子书服务
> 立即加入
了解我们
合作信息
帮助中心和购物指南