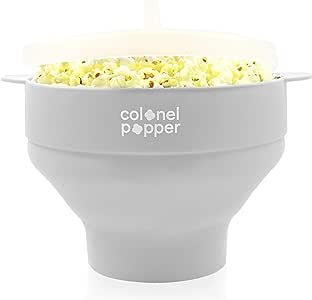 Popcorn Reimagined Ditch the noisy electric hot air poppers, the slow stove top poppers, and the harmful microwave popcorn bags. Colonel Popper will make your popcorn in 2-4 minutes in a revolutionary silicone bowl. You can make it as healthy as you want or channel your inner chef and create a recipe book full of culinary imaginations. Popcorn Your Way The Colonel Popper is perfect for making popcorn any time of day. Purchase multiple quantities for popcorn bars at Baby Showers, Graduations, Birthday Parties, and Weddings. Or bring the theater home and kick back with a movie, your kids, and your very own healthy custom popcorn! Trust the Colonel Colonel Popper is made of the most safe and durable high quality silicone. It passes the silicone pinch test!

Dawna
5.0 颗星，最多 5 颗星 Great value for a wonderful popcorn popper! Definitely worth getting!
2017年4月17日 - 已在美国亚马逊上发表
已确认购买
I am a fulltime RV'r. I do not have room for a lot of extra gadgets, so I have to really love and find value in any item I decide to purchase & keep. Popping my own popcorn saves me money and it's so much healthier than bagged microwave popcorn at the store! This popper cleans up easily, folds compactly down, is lightweight and works like a charm! Couldn't ask for anything more! You can pop without any added oil, but I just love the added flavor a tsp., or so, of butter adds! The price is incredible too! I've paid 2x this price for microwave popcorn bowls that didn't work half as well.
I highly recommend the Colonel Popper Microwave Popcorn Popper.
{It's fun to see how many people read my reviews. If you found this informative and helpful, please click "yes" to let me know. Thank you!}
阅读更多

Austen Fan
5.0 颗星，最多 5 颗星 For Optimal Results, Adjust Power Level in Mcrowaves of 1000W or More or USE POPCORN BUTTON if available
2017年4月16日 - 已在美国亚马逊上发表
已确认购买
This is a great microwave popper that is dishwasher-safe. We've used it much more than I'd thought we would, because it is so convenient.

Addendum, after reading some negative reviews of this product: Performance will probably vary, depending upon the wattage of your microwave. Ours is 1100 watts, and I've found that 1 minute, 50 seconds is the optimal amount of time needed. Even 10 seconds more results in burned popcorn. Less means more unpopped kernels. To avoid the horribly burned popcorn with the attendant noxious odor, some experimentation, starting at the 90-second mark and increasing in 10-second increments, may be necessary. (Edit- Reducing the effective microwave wattage by cooking at a lower power level, as noted below, is probably the method to use for optimal results.) As with all microwave popcorn cookers, including the plastic-lined bags, whether the microwave has been recently used also matters, because the rotating glass plate may already be quite hot. I would advise placing the popper on a room temperature plate in the microwave prior to popping, in that case.

Addendum P.S.: To ensure that the popcorn doesn't burn and that more kernels are popped, the seller recommends that only 80% of full power be used in microwaves of 1000 watts or more.

Update: I found that even 80% power was too high for my microwave to pop an acceptable percentage of the kernels without burning, so I reduced the power to 70%, starting with a room temperature microwave and with the timer set to 3 minutes. The results were much better. Each reduction in power requires more time, most noticeably prior to the first kernel popping. Because of the pauses in microwave radiation inherent in cooking at less than full power, the general bagged microwave popcorn rule of stopping when you hear popping only every second or so cannot be relied upon. A trial-and-error process to determine the optimal power level and cooking time for your microwave will probably be necessary.

Final Update: We've had a couple of these for a while now, and they are still like new. The only complaint that I have is that when the bowl is washed (upside down) in the dishwasher, its bottom retains a lot of liquid. We are thinking of making some holes in the base, so that the liquid can drain out. Would advise wiping any residual oil out of the bowl and the lid before placing it in the machine, so that it and the other dishes don't come out smelling like oil. One thing that we've (duh) realized is that we can just use the popcorn button on our microwave to get perfect popcorn every time, without any power adjustment, just as we could with the bagged microwave popcorn.
阅读更多
197 个人发现此评论有用

Amazon Customer
1.0 颗星，最多 5 颗星 Don’t waste your money.
2018年12月26日 - 已在美国亚马逊上发表
已确认购买
NOT a great product!! Good quality and design. Good storage/compact feature. Lightweight, easy to clean. However, made my first bowl 1/2 cup of kernels. I followed the directions perfectly. Set the microwave for 4 min and after 2 mins it was smoking, Darkened the clear lid and popped all out of the container. The directions said it would all stay in the bowl. 1/4, 1/3, 1/2 options for directions. It even stated you can add oil, butter or seasoning before popping. Don’t waste your money or time. I really wanted this to work. But, I will go back to the original way my grandmother made popcorn.....a pot on the stove....
阅读更多

ripmyshoes
5.0 颗星，最多 5 颗星 I went above the upper line which looked like 1/3 cup which is a lot
2017年8月6日 - 已在美国亚马逊上发表
已确认购买
I only add coconut oil before I microwave it. When I added butter to it before microwaving, the popcorn came out chewy. I suggest either popping them dry or with coconut oil, then adding melted butter when it's done. I have a 1500-watt microwave and it takes 2 to 2-1/2 minutes to pop if you keep the kernels under the top line and it pops about halfway up. I supervise it during the last 30 seconds for decreased popping sounds so the popcorn doesn't get overcooked. If I stay under the top line, it finishes in 2 minutes and pops almost all the kernels except about five or fewer. The first time I used this, I went above the upper line which looked like 1/3 cup which is a lot. It popped past the top of the popper and was stuck in the microwave because the lid was pushed all the way up. The popcorn still came out perfectly. This is a trap for popcorn addicts since it makes the popcorn really well. Not good if you are trying to cut back on popcorn consumption.
阅读更多
81 个人发现此评论有用
加入亚马逊Prime，从此免运费
亚马逊Prime会员可享海外购美/英/日/德跨境免邮，全年无限次！更有免费无限次阅读电子书服务
> 立即加入
了解我们
合作信息
帮助中心和购物指南