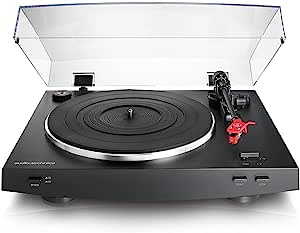 PierreNapa
5.0 颗星，最多 5 颗星 It was time for a new turntable...
2017年3月22日 - 已在美国亚马逊上发表
颜色: 黑色已确认购买
Purchased to replace a B&O RX turntable from 1985. If you've shopped for turntables, you've seen cheap ones, high-tech ones and those audiophile ones that cost several thousands. This turntable, for the money, has quality, really good looks, good sound, ease of use and easy set-up if you are able to follow clearly written instructions. Yes, you have to put on the metal platter, attach the belt, balance the arm correctly and be careful through the whole process.... it's a turntable... not an iPod. We like the fully automatic functions of the AT-LP3BK, yet if you lift the tone arm and move towards the record, it spins the platter and you can use the arm lift to gently let the needle touch the record on the track you want. The 12"/7" switch is great for running 45rpm 12" disks. It has selectors for MM or MC needles, Line or Phono output, 45/33 rpm, start/stop. For the "under $300" shopper, this is a very good choice for those who refuse to give up their vinyl, those who still buy high end pressings and for those who are new to "records".

Update: December 2018 When I purchased the LP3BK, I also purchased two replacement needles. Just this week I put a new needle on the cartridge... not because of damage or sound problems, but it's played a lot of records over time and I think of this as preventative maintenance. The replacement needle is inexpensive and easy to do because the cartridge can be removed from the tone arm. Clicking out the old one and clicking in the new one must be done carefully. For those who experience some speed issues, there is a way to correct the speed (google it up) carefully using a jewelers screwdriver and the "RPM" App ( I used an iPhoneSE ). This turntable was the right choice for us and we know it's gentle on our old records and new high grade vinyl pressings. Ease of use, reliable, great analog sound and good looks.
阅读更多
95 个人发现此评论有用

SR-71
2.0 颗星，最多 5 颗星 Good looking and nice features, but does not maintain speed properly
2018年5月19日 - 已在美国亚马逊上发表
已确认购买
I was excited to get into records again and saw this as a nice looking middle ground between the AT-LP60 and LP120. In addtion I liked that it was fully automatic so I wouldn't have to worry about running to the TT after the record ended.

Unfortunately, this record player does not maintain speed accuracy. About once per LP the motor slows down drastically and the song sounds extremely distorted. I also downloaded the RPM app on my phone to see the overall speed and it hovers at around 34.5 RPM, about 3.5% faster than it should. So even if the motor didn't slow down randomly the speed is still off.

I ended up sending it back and getting a better TT (the Project Debut Carbon) which maintains the speed great and sounds much better.
阅读更多
15 个人发现此评论有用

Homer
5.0 颗星，最多 5 颗星 A great turntable for playing vinyl. Easy to setup for 45 and 33. For easy listening, a good choice.
2018年2月18日 - 已在美国亚马逊上发表
已确认购买
Let me preface his review by noting that there are several types of people who are interested in sound equipment. There are those who are just interested in listening to music for background noise, those who are looking for a slightly higher level of quality, and then there is the true audiophile.

The problem is that often the reviews of the audiophile will bemoan the lack of consistency of speed or a rumble and a platter which some people may not appreciate or even notice. Granted that a review of a product does demand an evaluation from many perspectives, there sometimes is distortion as to how one perceives a product based on the expectation.

I have friends who have systems that cost more than $30,000, have dedicated rooms and listen to music and try to take in every nuance of the sound however, that is not me. My expectations are less and therefore I want good and reliable, but it may fail the perfection test.

I have always been a Beatles fan and for a birthday present I got an anniversary copy of the Sgt. peppers album and Abbey Road. So, I needed a turntable. The speaker system was not a dedicated one for music but was one that was hoped to receiver and surround sound for the TV. It is a decent speaker system, but it would not impress anyone who is looking for the best reproduction of sound.

Having done my research, I decided on this turntable. I was in college in the seventies and did own a dual 1219 turntable. So, I was looking for something that was somewhat similar in appearance, and I knew basically I wanted a tone arm that I could balance and had antiskid. Belt driver direct drive was important to me only in that belt drive was less expensive and direct drive systems that were decent had an increase in pricing.

On delivery, the setup was easy. I took the 2 RCA jacks out and connected them to a device which transferred them to an optical signal and hook that up to my receiver. I realize this is heresy in the world of vinyl listening, but I wanted music I could listen to, and easy hook up, and my family and friends are not dedicated to every sound and change in timbre of the music that is playing.

From my point of view, this was perfect. I was able to play my new vinyl Beatle records at 1.5 g and there was no skating. The balance on the tone arm was easy to set up, and even though I’ve heard some criticism of the cartridge that comes with this player, I thought it sounded great.

As an added gift, I was given the Beatles Christmas recordings which consists of 7 ½ inch 45s and a 33 where they record their Christmas greetings and discuss the holidays. Playing them on this turntable was easy. There is a 45 adapter and by simply pushing the size and the speed, they played without a hitch.

The automated feature was nice.

Of interest, one of the Beatles Christmas records is a 7 ½ inch disk but it plays at 33 with a small spindle. No problem, I simply use the standard spindle and set the speed and size of the desk.

My only complaint is there is no locking mechanism for the tone arm. It would be nice if the tone arm would lock into the holder if you are moving the turntable. You simply must use a rubber band or something else to keep it in place.

So, for those who are looking for just an easy setup, a simple turntable that sounds good and plays vinyl with a 1.5 or 2 Graham cartridge, this turntable does the trick.

If you’re looking for a much better system, others have noted different turntables that are direct drive, or even changing the cartridge on this one to improve the quality of sound. For the moment, I’m very happy

I do have one gripe which I mentioned to Amazon and they appreciated my input. I bought this as a warehouse item which was noted as near new with damaged packaging. When I received the item, there were scratches on the tone arm and the lid because the platter had not been well secured.

My gripe is with Amazon warehouse, the product itself is a good one. And the cosmetic damage does not appear to have affected any part of the playback.

I would strongly recommend this turntable for someone looking for an easy set up, and option to play vinyl with a good quality player, and the ability to play different record formats with ea
阅读更多
11 个人发现此评论有用
加入亚马逊Prime，从此免运费
亚马逊Prime会员可享海外购美/英/日/德跨境免邮，全年无限次！更有免费无限次阅读电子书服务
> 立即加入
了解我们
合作信息
帮助中心和购物指南