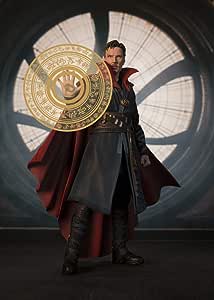 Graham Swearingen
5.0 颗星，最多 5 颗星 Bandai Tamashii Nation's S.H. Figuarts Doctor Strange Action Figure set
2017年8月6日 - 已在美国亚马逊上发表
已确认购买
July 25th was a big release day for S.H. Figuarts, I think they released 4 figures, 3 of which I got. Out of the 3 I got, I think this one might be the best value only because it comes with so many accessories, and the most hands, but this figure also has more drawbacks than the Dark Knight Batman and the Captain Jack Sparrow figures that I got the same day. This figures few short comings I forgave simply because one problem I was able to fix myself, and the others are easier to forgive because of how much stuff comes with this Master of the mystic arts. I didn't care so much for the origin story aspect of the film, but there was still a lot to like. Benedict Cumberbatch is Stephen Strange, and bringing the world of magic and mysticism into the MCU is cool and opens a lot of possibilities. Now that the origin story is over, I'm very excited for the sequel and to see where they take the character next. So what are the issues with this figure and what's in the box?

There's a lot in this box, this is the most accessories I think I've gotten with an S.H. Figuarts besides maybe the Iron Man Hall of Armor set. It's a bit of a bummer there's no Book of Cagliostro or an open Eye of Agamotto to peg onto his chest, but those are small gripes. So, onto the bigger gripes. The head sculpts and face printing are great, at least on my set. No miss print or bleeding or anything, but there was a sheen to it, a glossy toy sheen that made the faces look sweaty and blurred the dot matrix face print, so I taped up the hair and hit them with a coat of Flat Clear and made a huge difference. So that's an easy fix to that problem if you have Flat Clear. The other big gripe with the figure is the cape, which I think most people will have issues with. When Bandai does soft goods capes they do them pretty well, but this is the 2nd figure from them with a plastic cape like this, Thor being the other figure. And while from certain angles and certain poses, one could argue this plastic cape looks better in this scale than soft goods, from most angles it looks like angular plastic wings. From the front and back it pretty much does the job, but from the side it's hideous and it's not really removable which sucks. But beyond those 2 issues, this is another fantastic release, hence the 5 stars.

Like I said, both faces look great, as does the costume itself. There is so much freakin' detail, all the different paint applications and colors are great, this figure has airbrushing all over that adds a lot of depth, it makes the cape look better than it would have without, and the suit really comes alive (pictures don't do justice, couldn't get the lighting right to pick up all the airbrushing on his suit). The mandalas of light are some of the coolest accessories we've ever gotten from them, I love the sharp crisp print on them, and the fact that you can either attach them at the wrists and then put on whatever hands you want, or plug them into the special set of spell casting hands with clear pegs. That adds tons of posing options, as do all the fire effects. Not entirely sure why they added the fire effects, I don't recall him ever controlling fire or anything, but they look great and I'm still glad they were included. I'd have rather they included some sort of sling ring portal flame effect (and I am a bit bummed that they didn't sculpt/paint the sling ring on his hands, especially since the Jack Sparrow figure they released the same day had tons of rings painted on each hand which is great).

I know it sounds like I'm griping a lot for an $85 action figure, and that I'm complaining a lot about something I'm giving 5 stars, but they aren't complaints as much as they are truthful and accurate statements about this figure that I think potential buyers would want to know. I don't like nitpicking or looking for faults in a figure, but when paying this kind of price and doing reviews I am not going to brush over something I think is an issue that myself or others will have. Yea the cape is kinda sucky but it works mostly, yea it doesn't really make sense that they added so many flame effects to this set but I'd rather get more than less, even if it's not very accurate, it's going to add to my SH Figuarts Marvel display, and yea the glossy faces kinda suck, especially since it's not consistent since only 1 out of 10 SH Figuarts seems to have that issue but I fixed it myself. The positives of this figure I think far outshine the negatives. I loved this character in the film and can't wait to see him again in Infinity War and his sequel, I think like almost always Sh Figuarts nailed the likeness and the accuracy to the source material. All of the included accessories add so many options to how you can display this, I took so so many pictures because of how many options you have with the flame effects and mandalas of light. Any fan of Doctor Strange or the Doctor Strange movie, or SH Figuarts collectors will ultimately love this, issues and all. This figure makes for one of the best SH Figuarts display pieces I've gotten to date, it's very unique looking and stands out. This figure comes FULLY APPROVED. (Note the pic of the 2 heads, left head not flat coated, right head after flat coat)

Frankie Nguyen
4.0 颗星，最多 5 颗星 Overview; Another ALMOST perfect figure from SHF
2017年8月16日 - 已在美国亚马逊上发表
已确认购买
The other reviews have pretty much gone into depth on everything and included some nice pics so I'll just give my personal summary on it along with list of the exact main pros/cons.

PROS:
1. Paint & sculpt are excellent. I've seen a lot of people say the face paint detail is too soft but it seems fine to me. Likeness is definitely there and recognizable.
2. Soft goods like on the "skirt" pieces are extremely well done and don't hinder the leg articulation in any way. Would've been nice if the cape collar was a bit softer like those pieces though.
3. All the effects are awesome and there's tons of options you can play around with.
4. Articulation is great and not as choppy-looking as some other SHF figures. So you get both amazing aesthetics and amazing posing possibilites. Joints are also pretty tight so I have no current fear of any looseness.
5. Scale is perfect. For a one example/comparison, Robert Downey Jr. is like 5'11 and Benedict Cumberbatch is 6'0 so this Doctor Strange and the IM3 Tony Stark figure match that perfectly. You Can alter his height though if you want as this one has the leg-drop mechanic at the hip whereas the TS figure does not.

CONS:
1. Hard plastic articulated 3-piece cape. Weighs the figure down and is not that great looking. It does just plug into the back by a peg so if you want to take it out and make a custom cloth cape then that's ideal.
2. Ankle articulation is the only downside to all of the articulation. Seems like they just made it a stiff peg that goes straight down into the foot to compensate for the heavy cape. If you slightly pull the foot down you Can get some pivot and hinge-movement out of it but don't expect too much.
3. It's not necessarily a gripe and it may be a bit much to ask for More Accessories BUT a sling ring motion hand with the sling ring on it and maybe even a portal effect for it would've been nice. I mean that hand gesture is literally on the front of the box so they could've just added that LOL.

My Final Verdict: 9/10.
Can't think of anything else that stands out as a huge pro or con but yeah this figure's pretty much a ton of fun to pose around and play with. The slight lack of accessories for a better bang for your buck can be overlooked and the ankle and cape issues can be worked around so overall I definitely recommend this figure. And especially this version with the extra flame effects because c'mon it's Doctor Strange and you gotta have more magic for him to play with!
阅读更多
6 个人发现此评论有用

Nolfros
5.0 颗星，最多 5 颗星 This his how Doctor Strange was meant to be designed
2018年1月12日 - 已在美国亚马逊上发表
已确认购买
Now this figure is how Doctor Strange was meant to be designed. I mainly got drawn in by the Flame accessories, even though I am a huge fan of Strange himself. I love Tamashi Nations effect parts and probably always will. He looks just like the actor who played him in the movie, Benedict Cumberbatch. The interchangeable faces that come with him look amazing. The articulation isn't hindered by his cape or his robe. My only gripe about his accessories is his cape. They should of made it out of cloth or some kind of soft pliable material. His other effect parts he comes with are awesome and are easy to put on his hands. The only problem is the little pegs that are on the hands. You gotta be careful with those. Other then that the figure is amazing. If you have been wanting a Doctor strange figure this is the one to buy.
阅读更多
2 个人发现此评论有用

Han Hattori Hanzo
5.0 颗星，最多 5 颗星 Overall, a great figure
2017年12月3日 - 已在美国亚马逊上发表
已确认购买
Tons of accessories and the flame effect is an intense bonus!
Design, articulation, and paint apps are wonderful.
A definite must buy. I am extremely happy with this figure. The cape is a hard plastic and not cloth if you're wondering.
阅读更多
3 个人发现此评论有用
加入亚马逊Prime，从此免运费
亚马逊Prime会员可享海外购美/英/日/德跨境免邮，全年无限次！更有免费无限次阅读电子书服务
> 立即加入
了解我们
合作信息
帮助中心和购物指南