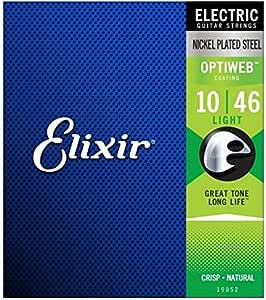 NotSteveB
5.0 颗星，最多 5 颗星 Seemingly Worthy Successor to the Nanoweb Line, Better-Sounding and Slightly Better Feeling
2017年3月8日 - 已在美国亚马逊上发表
尺寸: Medium (.011-.049)已确认购买
Cool, I get to be the first person to write a very public review of Elixir's new series of electric-guitar focused strings. While I don't really follow guitar media anymore (been a while since I received magazines and such), the fact that even an Elixir-only player was TOTALLY unaware of these coming out made me extra-intrigued by them.

They showed up while I was attempting to order my usual strings, the Medium (.11 - .49) Nanoweb series, and at first just confused; since when were there Optiweb coated strings? What's the difference? Most importantly, can they really improve their long-standing king of the "$10+" strings given their monopoly on it already?

Basically, the answer is yes...by quite a bit. I'll concede the following points before getting in to a succinct review of the product, as it's important:

1. I've been totally converted to Elixir strings for about 2 years now, after well over a decade of using D'Addarios or the occasional Ernie Ball Slinky when on sale.

2. From my observations, Elixirs in general are a love/hate product and "technology" with few people posting that they're just whatever. Anybody who falls in to the hate/dislike camp for whatever reason likely isn't going to be swayed over by these.

3. For some reason, after finding out about a new line of Elixirs I WANTED to like them, so I waited a bit to review them to ensure to minimize any confirmation bias.

Those 3 points addressed, I'll get to it: IMHO, Opitweb is a pretty big improvement in two ways, and lI think I'll continue using them over Nanowebs unless their longevity turns out to be dramatically shorter. After restringing my primary guitar, I noticed right away that these didn't seem to require any major post setup stretching or adjusting. D'addarios usually require 3 rounds of tuning, stretching, and then re-adjusting before settling in, at least for me. The nanowebs usually take just 2, but occasionally require a 3rd round after a bit of playing.

Maybe I'm just getting better at stringing my guitar and using locking tuners, but after a single round of post thread stretching, they've been remarkably steady in holding their tune. So much so that I have to wonder if it's not the strings, but whatever.

Most importantly they have a much brighter and...sharper(?) sound to them, and it's very very noticeable both unplugged and amped up. Not sure about the composition of them and in general I'm not very familiar with what metal or construction technique is involved in what brand, but whatever flack coated strings usually get for being muddy isn''t applicable with these. When tracking through the everyman setup (Scarlett USB Interface -> GR5 and S-Gear 2) there is a very easy to hear difference in high-end frequencies.

So TL;DR - extremely similar to the existing product from Elixir, but with a slightly improved sound (if crisper high-end is what you want) and subtle but definitely smoother feeling action when sliding around the fretboard. If you like Elixirs now, you'll almost certainly like these the same or more. If you don't, you probably won't be won over with these. But, if you're somebody who loves the sound of a fresh set of D'Addarios or Slinkys and hates how quickly they fade, give these a shot; might save you money in the end.

Bob M.
2.0 颗星，最多 5 颗星 Used to love them but now I hate them (Breaking like crazy)
2020年4月20日 - 已在美国亚马逊上发表
已确认购买
I just bought a 10 pack and have already broken the high E string 3 TIMES in 4 days in the exact same spot (Right at the bridge where it is clamped to my Floyd Rose) That's right, I have had to replace the high E string 3 times in 4 days!!! I practice about 6 hrs a day and broke them just practicing. I love the tone of them and before, they seemed to last longer but recently, they have started breaking like crazy. My hands corrode regular strings quickly which is why I tried these out. I am so bummed because I love the sound of them. Now I have to switch back to regular strings. I cant keep replacing these or I will go broke.
阅读更多
7 个人发现此评论有用

John B.
1.0 颗星，最多 5 颗星 I hate these strings.
2019年3月10日 - 已在美国亚马逊上发表
尺寸: Custom Light (.009-.046)已确认购买
A good friend swears by them and emphatically said they'd work perfect for my strat, Les Paul or SG. I hadn't changed the heavy guage strings on my Gibson SG 61 RI for a long time so put them there. Big mistake. They took all the "balls" out of that guitar and don't feel any lighter. The richness is gone. It sounds like a shrill Fender and not in a good way. Now, I love Fender's and maybe it would work on one of my strats or tele's but it just doesn't work for my SG. The warmth, richness and fullness are gone. I'm very disappointed and found out the hard way that the best strings, for me, are almost any other string than these. Can't wait to get them off and completely regret my purchase.
阅读更多
6 个人发现此评论有用

kenblk
5.0 颗星，最多 5 颗星 Best Strings on the Market, IMHO
2018年3月21日 - 已在美国亚马逊上发表
已确认购买
I love these strings. I have an acidic body PH which can be really corrosive on regular guitar strings as well as the guitar hardware. I've struggled all my life with the issue trying every trick in the book to try to keep the strings from corroding and rusting. A few years ago I started using Elixir strings on my acoustic guitars, because we all know that acoustic strings start to loose their tone within days of being installed, and I have been very happy with the extended life span. I just recently started using them on my electrics and have found them to be equally long life. I have figured that even given the increase in price the long life and good tone make using them cost effective also being that I don't have to change strings anywhere near as often. If you have not tried Elixirs give a pair a spin, I think you'll be pleasantly surprised.
阅读更多
4 个人发现此评论有用

Amazon Customer
5.0 颗星，最多 5 颗星 Amazing set of strings
2020年9月29日 - 已在美国亚马逊上发表
尺寸: Light/Heavy (.010-.052)已确认购买
I originally bought these strings as a direct replacement for my Jackson Dinky js22 DKA, but I was unaware that Jackson string gauge is 0.009-0.042. Extremely light string gauge compared to the 0.010-0.052 I bought. The strings at first were very hard to press on because my fingers aren’t use to such thick strings. Although lowering the tuning to from normal to a a 1/2 tune will help tremendously. The heavy light strings are really meant more for lower tune, and they feel incredible. I’d highly recommend these for anyone who often plays 1/2 or drop D tune. If not I’d recommend getting 0.009-0.042 a lighter gauge if you own a Jackson, and looking for a direct replacement.
阅读更多
1 个人发现此评论有用
加入亚马逊Prime，从此免运费
亚马逊Prime会员可享海外购美/英/日/德跨境免邮，全年无限次！更有免费无限次阅读电子书服务
> 立即加入
了解我们
合作信息
帮助中心和购物指南